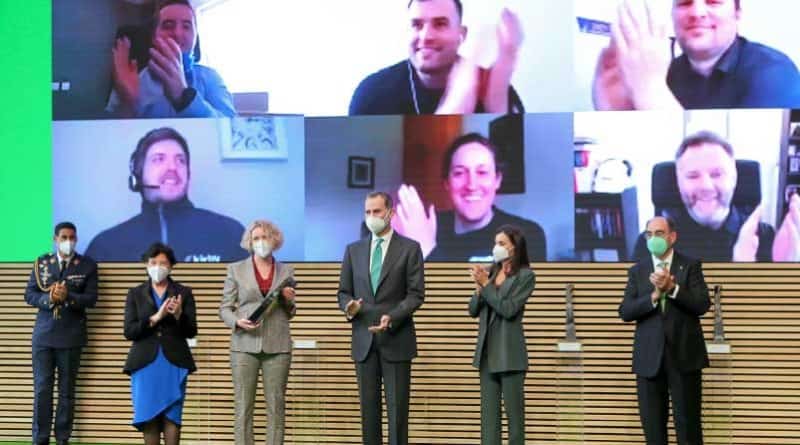 Kirby Group Engineering has received the Iberdrola Supplier of the Year Award for Digitalization at a ceremony in Madrid, Spain. The prestigious prize is one of just four supplier awards given out by the global giant Iberdrola.

The Kirby team expressed sincere thanks to Her Excellency Síle Maguire, Ireland’s Ambassador to Spain, for kindly accepting the award on the company’s behalf from Their Majesties King Felipe VI and Queen Letizia.

Kirby was nominated for the Iberdrola award by its colleagues at Scottish Power, as a result of collaboration between the two firms in Scotland. Kirby’s involvement played a key role in installing Scottish Power’s first digital substation project. The company also recognised Kirby’s leading-edge digital construction capabilities as well as their extensive use of tablet devices on-site. Having first worked with Scottish Power in 2012, Kirby has to date delivered more than 50 substation and renewable energy projects with the firm.

Group MD Mark Flanagan said the development has been a wonderful boost for the Kirby team: “Winning this award is an incredible honour for our hard-working teams who are constantly focused on using technology to bring more value for our customers. I’d like to thank the team at Iberdrola for including us in a group of fantastic industry leaders, and of course our friends at Scottish Power for the nomination.”

Ambassador Síle Maguire said, “The Kirby story is a wonderful example of Irish success in building strong, successful European partnerships.  I am delighted that Kirby’s values and its record on delivery and innovation has been recognised at the Iberdrola Supplier Awards, and it was my honour to represent them at the event.”

Mark Danaher is Kirby’s Technical Services Manager. He says digitalization is a really exciting field of engineering: “Digital construction is always at the forefront of our project delivery. It drives efficiency and has a positive impact on key project drivers such as programme, QEHS, budgets and ensures the best possible outcome for our clients. The use of the latest technology such as Robotic Total Stations, point cloud scanners and tablets in the field allows for an error free installation and access to real-time information.”

As well as his contribution to Kirby’s award-winning projects, Mark’s work in leading the development of Kirby’s capabilities recently saw him named one of Autodesk Construction Cloud’s ‘40 under 40: Champions of Construction’ worldwide.

Mark Flanagan says the latest technology offers amazing possibilities and opportunities for Kirby and its clients: “Being recognised within the industry for our work on what is a rapidly evolving part of engineering and construction highlights the agility and adaptability of the Kirby team. It’s all down to our people, which is our primary core value. By investing in their development and creating a learning environment, we can stay at the forefront of digitalization, through which we can continuously embrace the future of engineering and construction”.

Stephen Creaner, Executive Director, Food, Industrial, Life Sciences & Innovation, Enterprise Ireland, added: “Enterprise Ireland has worked closely with Kirby in Europe over the years and this award highlights the company’s digital construction expertise which is a driver of productivity and is dramatically transforming the nature of the industry. Well done to all the Kirby team.”