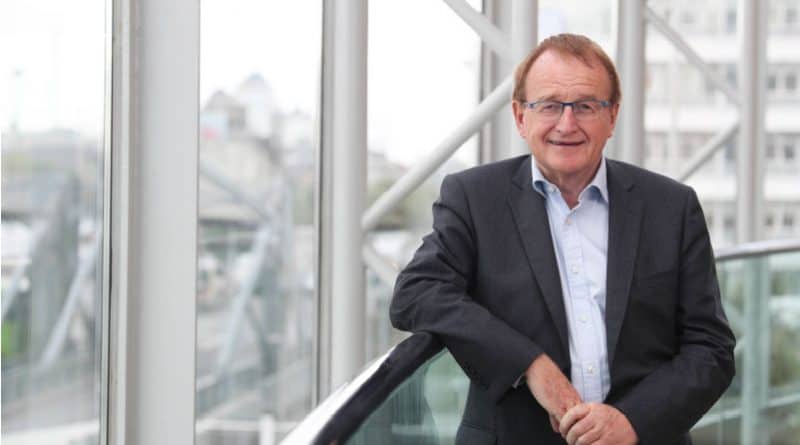 It is hoped that construction activity in Ireland can gradually resume over the coming weeks with Government approval. This activity must be based on the adoption of new Standard Operating Procedures (SOP) issued by the Construction Industry Federation (CIF) in line with Government and HSE recommendations on the management of COVID-19 in addition to the mandatory health and safety legislative requirements.

In addition, we could take ownership of this unique opportunity to accelerate new methods of working to improve construction productivity and climate resilience as an integrated package. Such productivity improvements are also mandated in our National Planning Framework ‘Project Ireland 2040’ and associated National Development Plan and more recently our Climate Action Plan. In recovering our economy, we therefore can deliver a truly integrated approach with respect to the wellbeing, productivity and sustainability of our industry.

In our National Planning Framework, we have a roadmap for the Strategic Outcomes relevant to the construction industry. These are stated in the Plan to include “A Strong Economy supported by Enterprise, Innovation and Skills” and “Transition to a Low Carbon and Climate Resilient Society” – both outcomes to improve climate resilience and deliver better value for money invested. This theme of increasing innovation and productivity through a digital build process has been exercising the minds of the Construction Sector Group (CSG) in recent months prior to the pandemic arising. The CSG was set up by the Government in 2018 to better facilitate dialogue between government and the principal industry organisations on how best to achieve and maintain a sustainable and innovative construction sector to more successfully deliver on the commitments in Project Ireland 2040.

“Transition to a Low Carbon and Climate Resilient Society”, needs a national roadmap which is the 2019 Climate Action Plan currently under review as part of government formation talks. Suffice it to say that any revision to this Plan is more than likely to result in even higher targets with respect to carbon emissions reduction. Achieving the medium and long term targets for 2030 and 2050 respectively even in the current Plan will require fundamental societal transformation and more immediately, the allocation of resources and sustained policy together with significant behavioural change. 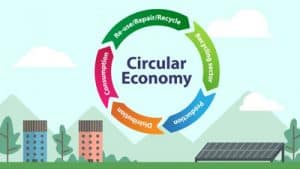 The one area where the construction industry can influence the most significant change in climate resilience is in moving waste management more fully towards the ‘circular economy’ model which has been a key objective of national and EU waste policies over the past decade. Over previous decades, waste management systems and supply chains operated in the traditional ‘linear economy’ of ‘Reduce, Reuse, Recycle’ without actually closing the necessary circle or loop to prevent and minimise waste. In recommencing construction activity this spring 2020 in what is now a period of economic recession, the elimination of ‘waste’ is imperative as construction is responsible for over 35% of the EU’s total waste generation.

It is therefore likely that C&D tonnage will again reach double digits as Ireland’s construction industry ramps up to deliver the planned infrastructure ambition outlined in Project Ireland 2040 estimated at €116 billion. There will be insufficient infrastructure to cater for the resultant waste all of which is recyclable. The logical conclusion that we can draw from this scenario is that the full development of the circular economy model will be an urgent requirement. 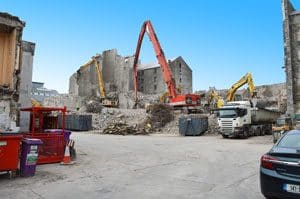 A further impetus to current waste policy is the EU Green Deal announced on 11 March 2020 as one of the priorities of new Commission President Ursula von der Leyen with the ambition to make Europe climate-neutral by 2050. In her policy document, there is a new “Strategy for a Sustainable Built Environment to include an increased ambition with respect to climate resilience, energy and resource efficiency, management of construction and demolition waste, digitalisation and skills” – similar in fact to the strategic objectives of our National Planning Framework Project Ireland 2040. One could read this as a new industrial strategy for the construction industry.

Circular economy principles are not new to Ireland or to the UK. In fact, the term ‘circular economy’ was created by a young English sailor Ellen McArthur after she broke the world record in 2005 for the fastest solo circumnavigation of the earth (50,000km) at the age of 29. She then established the Ellen McArthur Foundation, a charity focusing on accelerating the transition to the regenerative circular economy in three areas – education, business and insight.

In 2007, the then Department of Environment, Community and Local Government initiated an innovative project (2007–2011) to investigate the opportunities for a ‘Market Development Programme for Waste Resources’. It was focused mostly on finding new markets for paper and plastics then being exported to China. The project also looked at the conversion of food waste into compost for gardening and parks. It was managed by RPS who explored ways to create jobs based on carbon growth decoupled from resource use. To create higher public awareness it was rebranded ‘rx3 – Rethink, Recycle, Remake’ to create a conversation on the ‘circular’ economy to eliminate or reduce wasteful behaviour. ‘rx3’ thus replaced the traditional wording ‘Reduce, Reuse, Recycle’ which was in retrospect ‘linear economy’ thinking actually creating more and not less waste by not closing the circular loop.

In 2012, the Government then published a new national waste policy ‘Waste: A Resource Opportunity’ endorsing the circular economy and calling for the elimination of landfill for municipal waste (household and commercial). In 2015 the third generation of Regional Waste Management Plans were adopted across Ireland which were aligned with the new national policy. The EU Commission published the first edition of the Circular Economy Action Plan also in 2015 which has now been developed further into the European Green Deal in 2020, a key element of which is better C&D waste management.

When the quantities of C&D waste were dramatically rising in the Celtic Tiger back in 2002/2003, the construction industry came together with government and the EPA to look at large scale diversion of construction waste away from landfill towards prevention, recycling and recovery operations. A new National Construction Demolition Waste Council (NCDWC) was set up by the Department of Environment which published Best Practice Guidelines to include selective demolition of buildings to safeguard, store and reuse valuable site materials like roof slates, stonework and other articles of value to the industry. The Council together with the Government, local authorities and the EPA detailed the required content of Site Waste Management Plans. The requirements for which were subsequently incorporated into new planning regulations for construction sites.

In 2020, we in Ireland now have a unique opportunity to create a more sustainable, more efficient, cleaner and more competitive industry to build the homes, offices and infrastructure for the next generation. Our first priority must be the health, safety and wellbeing of our workers in the industry by implementing the Standard Operational Procedures to the approval of the Government and the HSE. We also need to build on the digital transformation with BIM which has started in recent years and ramp-up to service the SME community. This transformation will extract the maximum value in material and monetary terms from the recoverable resources in the industry. Thus the treble integrated objectives of public health protection, increased productivity and climate resilience can all be promoted together for the maximum benefit of the construction industry and the Irish economy as a whole.