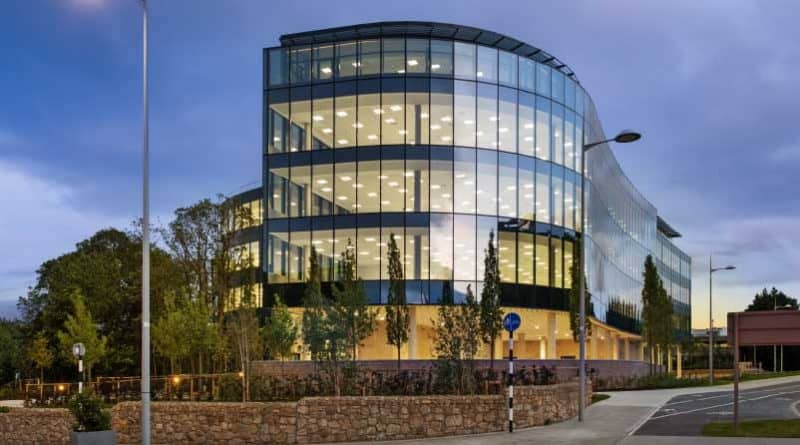 The Dublin Office Market reported a significant level of take-up in Q1 reaching 964,737 sq. ft across 29 deals, that’s according to the latest JLL Office Report. This quarter surpassed take-up levels experienced in both Q1 2017 and Q1 2018 but falls slightly behind the record level of take-up in 2019 which amounted to 1.3 million sq. ft in total. This is largely due to the completion of some significant deals agreed in the second half of 2019.

The suburban market saw increased demand and recorded 3 of the top 5 deals, including the largest letting to Mastercard of 250,000 sq. ft at One South County, Leopardstown.

Q1 saw a 50-50 split in terms of take-up between the city centre and suburbs. Of the 5 deals recorded over 50,000 sq. ft, 3 were in excess of 100,000 sq. ft. However, as a continuing trend, Dublin 2 remained the dominant sub-location having seen 41% of take-up in Q1. While this has been a recurring theme year on year, when the current vacancy rate for Dublin 2 of 3.4% is analysed it looks unlikely to continue in the short-term. This is also due to the fact a large proportion of the Grade A stock due to be completed in 2020 is located within Dublin 1 and along the North Docks.

Commenting on the Q1 Report, Tomás Mulcahy, Offices, JLL said, “Once again, it’s no surprise the TMT (Technology, Media, & Telecom) Sector continues to dominate in terms of take-up accounting for 64% of sq. ft leased. The main occupiers driving such growth include Guidewire, Google, Dropbox, Zalando and Slack. Banking and Finance accounted for 30% which was largely driven by Mastercard’s leasing of the entire of One & Two South County in Leopardstown totalling 250,000 sq. ft.”

In addition to Mastercard, Google signed for an additional 75,000 sq. ft of expansion space in Central Park, Leopardstown shows the continued demand for Grade A office accommodation in suburban locations from large multinationals. The south suburbs were once again the strongest performing suburban location and accounted for 334,000 sq. ft or 35% of the total take-up. However, it wasn’t just the South Suburbs that saw strong levels of take-up this quarter. National Broadband Ireland have leased 36,000 sq. ft over 2 floors in 3009 Lake Drive in Citywest Business Campus. With the last remaining floor currently reserved, Citywest is currently experiencing almost zero vacancy throughout the park. The largest deal in the West Suburbs was global software giant Guidewire’s expansion in Blanchardstown Corporate Park which saw them lease 85,000 sq. ft at 1 Semple Exchange prior to practical completion.

While Flex-Space providers have been prominent players in the Dublin market for the last number of years, Q1 continued to see a reduced level of activity from this sector with only Knotel completing 2 deals this quarter. The current market conditions may put pressure on these operators however the service will continue to play a key role in the Dublin office market as it addresses several core property needs for smaller operators and large corporates alike.

Of the stock currently under construction or refurbishment, 49% of this is either pre-let or reserved. This leaves 2.85m sq. ft of new stock available, of which 1m sq. ft is due for delivery in 2020. With the current government restrictions impacting developer’s ability to continue works on site, we may see some 2020 completion dates pushed out to 2021 for some schemes, however this is yet to be determined. The majority of new office stock under construction in Dublin is focused in the City Centre (85%) with the suburbs accounting for 15%.

Commenting further, Tomás Mulcahy said, “Given the uncertainty of the COVID-19 global pandemic, along with Government restrictions, it is unlikely Q2 will replicate the strong performance witnessed in Q1. Sentiment from occupiers is that they are still committed to Dublin, but we believe that some expansion plans are likely to slow during 2020. That said, pipeline demand remains strong with 3 million sq. ft of identified demand, so it remains to be seen how much of this will transact in 2020.”

In general, demand remains focused on smaller deals with 55% of transactions in the quarter being for 10,000 sq. ft or less which is broadly in line with trends seen in previous quarters. However, due to the quantum of space taken by occupiers such as Mastercard and Google, the average deal size was 33,267 sq. ft. When deals over 50,000 sq. ft are discounted, the average deal size drops significantly to 11,870 sq. ft for the remaining 24 lettings.