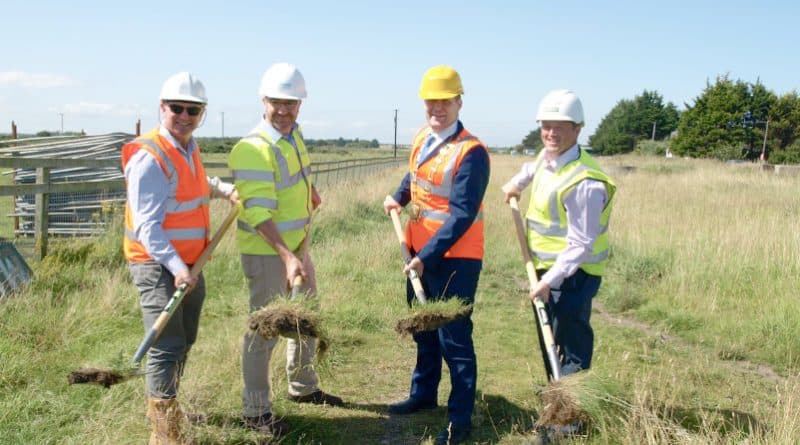 Construction has just commenced on the Baldoyle to Portmarnock Walking and Cycling Greenway project, which Atkins has delivered under the leadership of Technical Director Martin Deegan through all stages, from concept through design planning procurement and construction supervision. Murphy International have been awarded the contract earlier this month by Fingal County Council, with the end of October being targeted for substantial completion of the works.

On the 23rd of July 2019 the Mayor of Fingal Cllr Eoghan O’Brien attended the Turning of the Sod event for the Baldoyle to Portmarnock Walking and Cycling Greenway project in North County Dublin. Also Kevin Halpenny and Hans Visser from Fingal County Council, Martin Deegan, Stephen Wyse, Andrew Butterly and Fidelma Lucey from Atkins, and Kevin Morrissey and James Donnelly from Murphy International Ltd., were all delighted to be in attendance along with the Mayor at the ceremony which was held on the site in Baldoyle.

The proposed greenway is located at the Racecourse Park and will allow cyclists and pedestrians to travel through the park parallel to the Coast road linking Baldoyle with Portmarnock. When completed the scheme will represent a major new amenity for the area. This Greenway will be a fantastic addition for locals in the area but will also a draw for tourists, as it will be an attractive and high quality walking and cycling facility, maximising and respecting the opportunities presented by the area’s natural assets and coastal location adjoining Baldoyle Bay.

Welcoming the news, Mayor of Fingal Cllr Eoghan O’Brien said ‘I am delighted to see work commence on this pedestrian and cycling greenway in this beautiful coastal setting.  The outdoor active lifestyle is becoming increasingly popular and I can see this greenway becoming a very popular, safe and enjoyable resource for the local community as well as visitors and commuters.’

Interim Chief Executive of Fingal County Council, Ann Marie Farrelly said: ‘I welcome the commencement of construction of the Baldoyle to Portmarnock Greenway. In keeping with our commitment to climate action, this scheme will provide a valuable addition to travel infrastructure for pedestrians and cyclists. The route has been designed taking account of the coastal setting so tourists and locals alike can enjoy Fingal’s incredible coastline and natural landscape.’

Martin Deegan commented ‘Atkins are delighted to win this project and are well placed to ensure it is delivered successfully given our vast experience with Greenways and the expertise of our local team based in Fingal. The overall vision from the NTA and Fingal CoCo will ensure that the Greenway will be a major asset for outdoor recreation and tourism in Ireland while also providing a real “traffic-free” alternative for commuter cyclists travelling along this route.’

With 88 kilometres of coastline, Fingal has great potential for the provision of cycleways which will improve sustainability, transport infrastructure and the health and well-being of the County’s residents. The Baldoyle to Portmarnock route is the first phase of a major initiative to provide a Greenway along the entire coastline of Fingal.

The scheme is co-funded by the NTA and is due to be completed by the end of October 2019. Further phases of this project are progressing through the planning and design process.

Atkins are also managing and delivering two adjoining schemes the Sutton to Malahide Pedestrian and Cycle Route and also Fingal Coastal Way. Both of these projects are being managed and delivered by Atkins as separate design commissions.

Hans Visser, Fingal CoCo commented ‘that the delivery of this project will have significant benefits for not just the local community but also for Tourism in the area. Congratulating Atkins on winning the Technical Consultancy Services Contract he noted the technical expertise they will bring to the Scheme.’