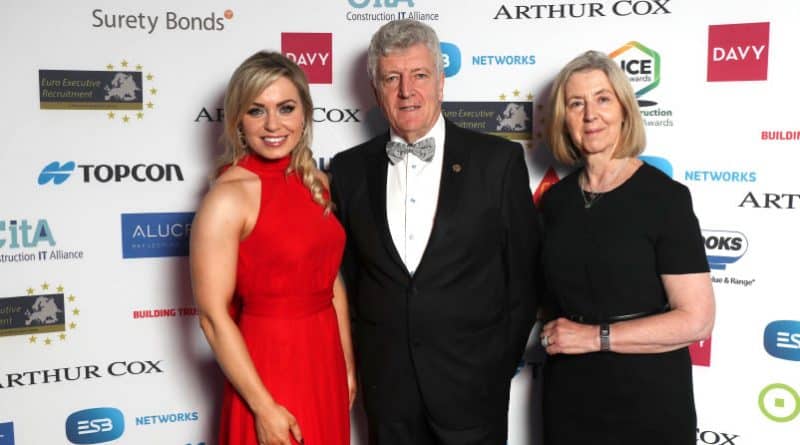 Former Intel Ireland General Manager, John McGowan was presented with the Industry Contribution Award at the 2019 ICE Awards. Irish building speaks to John about his career and to hear his advice for the future of construction.

The Industry Contribution Award recognises an Irish individual working at home or abroad who has made a significant contribution to the Irish construction industry during their career. John has been a leader for innovation and change and has had a career rich with variety.

John McGowan was the recipient of the 2019 ICE Awards Industry Contribution Award for his contribution to the construction industry. John’s career has covered a broad spectrum of technical, administration and senior leadership roles, including engineering design, project management, construction, manufacturing, facility and company management. This diversity of roles was underpinned by a strong work ethic, integrity, flexibility, responsiveness, strategic insight, the ability to create and sustain a positive and productive working environment, as well as a wide technical knowledge.

He tells us that the Gala event was an “enjoyable evening and a great opportunity to meet with old colleagues, many of whom were being recognised themselves.”

The feedback from winning the Industry Contribution Award has been positive. “The people I met on the night of the Awards were most gracious, telling me that the Award was well deserved.”

Since 2009, John has worked in private consultancy, providing leadership and strategic positioning advice to selected business contacts, particularly focused on growth within Ireland and developing export markets in engineering services. John has been an active board member in two companies. He was appointed to the board of DPS Engineering in 2010, advising on strategic options and mentoring. He was also appointed to the board of Chris Mee Group in 2014. 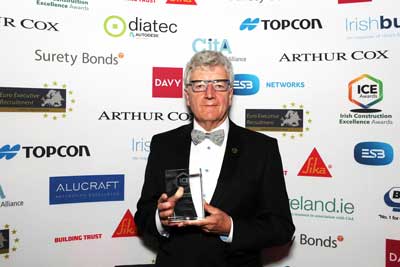 John’s father was an engineer working successively in Mayo and Tipperary (SR) County Councils. Unsurprisingly John wanted to be an engineer since he was a child. “I had an aptitude for engineering problem solving, not least because I have always been fascinated by technology.”

After graduating with a civil engineering degree from UCG, John’s career started with Tipperary (SR) County Council where he worked in the Roads Department from 1970 to 1972. From the local authority he went to Trinity to undertake a master’s degree in structural analysis. Subsequently, he worked as a structural engineer with Nicholas O’Dwyer Consulting Engineers, moving after four years to Jacobs Engineering where he spent 15 years, working in many roles, including structural engineering, project management and manager of projects.

As a structural engineer, he was involved in the design of process structures for the Arab Potash Company’s potash recovery plant in the Dead Sea Valley, Jordan. Moving to project management for most of the 1980s he managed various pharmaceutical projects including the first large bio-tech pharma plant built in Europe for the Eli Lilly owned Dista Products in Liverpool; designed in Dublin, built in Liverpool.

In 1989 he became manager of projects, overseeing all projects executed in Jacobs’ Dublin Office. In addition, he acted as project director for the Intel Fab 10 project, then the biggest capital investment in the country.

At the end of the Fab10 project, John was offered a job in Intel. After a year settling in, he was appointed General Site Services manager for the Leixlip campus. He was next sent to Oregon and subsequently New Mexico to learn how wafer fabs operated and were managed. Towards the end of this training, he was appointed as General Manager on the Intel Ireland Campus, with responsibility for the smooth running of all operations on the site, and maintaining a close relationship with the Irish Government, local authorities and the neighbouring towns.

John was made a Vice President of the Technology & Manufacturing Group in 2000. He was appointed a director of Corporate Services in 2001, working out of Phoenix Arizona. This involved co-management of a $2 billion annual capital construction programme, and an annual sustaining budget of $2 billion, both delivered through a globally distributed team.

The capital portfolio included the construction of state-of-the-art wafer fabs, assembly test plants, laboratories and offices, coupled with real estate management, in a variety of locations in the US, China, India, Philippines, Ireland, Israel, Russia and Costa Rica. Corporate Services was also a key contributor to the site selection process for new investment, which encapsulated incentives and permit negotiations with governments in locations under consideration.

After six years commuting between Dublin and Phoenix, John moved back to work with Michael McNamara & Company as Managing Director of the company’s €400 million annual construction turnover. This was the era of the first forest of tower cranes in Dublin, although there were increasing doubts about the sustainability of the levels of investments. “As the total available market for construction contracted towards the end of the decade, it was time to downsize the management team to return to a structure that was more appropriate to levels of capital spending in the early nineties. I left McNamara’s by agreement with the owner, with whom I retain a friendly relationship.”

After a varied career, we ask what the highlight has been so far. “Corporate Services won the Intel Quality Award in 2004. Its scope included a very diverse set of services, ranging from facility management to security, construction to environmental services, on all campuses world-wide. A common commitment to quality and customer focus underpinned the winning of this award.”

We ask, based on this career experience, what advice he has for both young professionals and industry leaders.

John’s advice for young professionals starting in the industry is to embrace change. “The pace of change is accelerating as the industry grapples with digitisation, improving productivity and addressing customers’ more stringent expectations on quality and durability. Constantly upgrading skills will be unavoidable as construction techniques and applications get ever more powerful and complex.”

Following on from this we ask if he has any guidelines for building a successful career. “Be ambitious! Do not be afraid to take on a challenge, or to change career direction. Your training in engineering and mathematics allows you to tackle a very wide range of tasks and problem solving. Remember that good communications and interpersonal skills are essential for leadership roles: know and practice the basic skills like listening and motivation in all day to day work opportunities. Also learn how to run a business, including understanding funding sources, working capital availability and a balance sheet. Managing money and expanding turnover are the key skills for profit growth, underpinning personal success.”

Discussing the topic of the skills shortage, John says the biggest challenge to attracting more graduates into engineering and allied professions is the roller-coaster level of demand in the sector throughout recent decades. He praises young engineers’ ability to find work abroad, while noting that international diversification of Irish construction companies would benefit employees and employers by providing a wider available market when managing retention of key skills.”

With a broad experience of engineering and the construction industry, we talk of their public image. “The image of the non-construction engineering firms is well respected in the media, who are typically impressed with leading-edge technology,” John says. “However, this broad respect does not always carry over to the construction sector, where coverage can stretch from admiration at landmark buildings and public works, to castigation at reported overruns and understandable criticism of shortcomings in completed projects.” He hopes the tightening of building regulations, and the undoubted commitment of the industry to improve the quality of its output will lead to an increasing respect. John is optimistic for the future of construction, but says we must be ambitious, determined and competitive.

The industry has made great strides in safety in the past three decades, but John believes it needs to focus on the quality and sustainability of all aspects of construction with an equal determination, believing digitisation and virtual building will greatly aid this path if sensible investments in the technology are made.

Construction costs are a key competitiveness factor for the whole economy he says. “Recent disturbing comparisons of construction unit costs showed Dublin to be in the highest cost grouping of cities in the world. Attracting future incoming investment in all construction sectors may become more challenging after OECD measures on distributing corporation tax liabilities between originating location and sales location.

“To compete Ireland will need a more competitive construction sector. Any improvement in cost competitiveness must come from true productivity gains to simultaneously deliver profits, and the associated free cash, that would enable the most able Irish companies to invest in the systems and manufacturing capabilities that seem to offer the best path to competitiveness for the sector.”

John is still busy outside of his consultancy work and roles on boards. For the past five years, John has been a member of the executive committee of the Irish Academy of Engineering, including a year as its president; he was previously President of Engineers Ireland in 2006/7. John has recently taken over the chairmanship of CitA and says he admires the range of practical experiences of digitisation shared in the CitA breakfast meetings. “Now that I am semi-retired, I have time to attend more technical talks, which has always been a quasi-hobby for me.”

The content of this site is subject to copyright laws and may not be reproduced in any form without the prior written consent of the publishers. The views expressed in articles do not necessarily represent those of the publishers. This article first appeared in the ‘Leaders in Construction’ issue of Irish building magazine 2019.