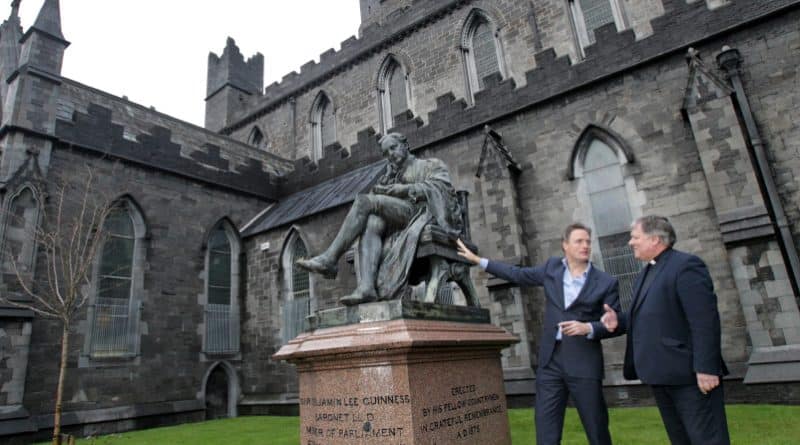 Saint Patrick’s Cathedral, Dublin, has launched a major fund-raising appeal to entirely replace the slates on the higher roofs of the building.

Members of the public, in person and on-line, are being given the chance to follow in the philanthropic footsteps of the Guinness dynasty through sponsoring a slate, or slates, which, in an interesting quirk of history, are being sourced from the same Welsh slate mine which provided the slates for the restoration in the nineteenth century.

The Dean of Saint Patrick’s Cathedral, Dr William Morton, explains that, while the roofs have been maintained to a high degree over the last 160 years, there are serious problems which have arisen due to ageing – notably nail sickness, where nails have become totally rusted, or have dropped out altogether, together with delamination of some of the slates. This means that the entire roofs have to be re-slated at an estimated cost of €9 million. This will be the most significant conservation project undertaken by the Cathedral since the 1860s when Sir Benjamin Lee Guinness funded, undertook, and personally supervised, a full-scale restoration of the building.

“Saint Patrick’s Cathedral – the third church on this ancient site, on which it is believed our patron saint baptised some early Christians from a famous well nearby– is a protected structure, and also a national monument. Founded, and granted collegiate status, in 1191, it was raised to cathedral status in 1219; many alterations occurred over the years, but the present building dates to the mid-thirteenth century and has served as The National Cathedral of the Church of Ireland since 1870,” said Dean Morton.

Recognised extensively for its excellence in choral worship, its Choir School, the oldest school in Ireland, founded in 1453, and the fact that it is the only cathedral in the world to have sung Matins during term time, the Cathedral is in the top three or four major tourist attractions in Dublin with visitor numbers in 2018 of almost 630,000. As well as this, Saint Patrick’s Cathedral is a much sought after venue for arts events including musical and choral recitals, lectures and exhibitions. There is also a very busy Education Department through which workshops and other events are organized for about 6,000 children annually, while our Community Development Officer engages avidly with Dublin 8 and beyond in interesting, innovative and engaging initiatives.

“If the 800 years of history of Saint Patrick’s is to continue as, first and foremost, the National Cathedral with its distinctive pattern and nature of worship, and if all our other activities are to be maintained and developed for what is, thankfully, an ever-increasing footfall, then this urgent work of replacing the slates must proceed immediately,” said Dean Morton.

“Individual sponsorship packages start from €50, and we expect, if donors wish to have a slate donated in memory of a loved one, to record the donations, and the details of those in whose memory they are given, for posterity.”

Dean Morton explains: “We have been preparing and budgeting for this major building project for some years, and already €5 million has been raised. It is our hope that, with this new appeal, together with all other searches for funds, we shall be able to realise our financial target.”

The current critical works will be undertaken by Clancy Construction under the supervision of conservation architect Mr John Beauchamp of Benjamin+Beauchamp Architects, Wedmore, Somerset. The Cathedral is pleased to note that this conservation project will provide significant employment to conservation specialists thereby protecting traditional crafts and skills.