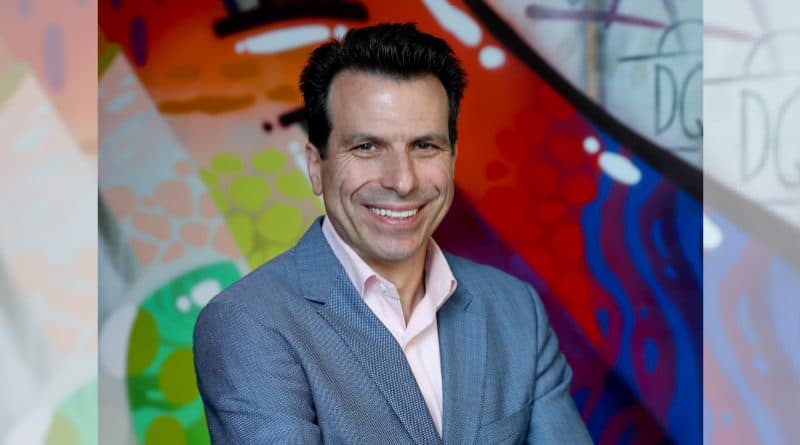 As Autodesk marked the official opening of its new EMEA headquarters in Dublin, chief executive Andrew Anagnost spoke with Irish building magazine about why the company is investing big money and time in industrialising construction.

While the target audience for Autodesk’s software has expanded in recent years to include makers of all kinds of things – from roads to smartphones and cars to films – the company has shifted its focus back to the construction industry and is investing heavily in digitising a sector that’s been very much behind the curve.

This effort has coincided with Andrew Anagnost’s time as president and chief executive of the company, which had revenues of over US$2bn in 2018. A 22-year Autodesk veteran, the aeronautical engineering and computer science PhD – from Stanford University – held various technical and strategic roles before being appointed to the top job in June 2017.

Anagnost, who was part of the team that built Inventor, Autodesk’s mechanical design and engineering product, and led the recent restructuring to a software-as-a-service (SaaS) model, says he was always more interested in having an impact than having a career aspiration to be chief executive. “I wouldn’t say I had no plan. I went through a progression and chased certain things but I never had this grand destination. As time went on, I always pursued opportunities where I felt I had the skills and the passion and I could make a difference.”

When Autodesk began its search for a new leader in 2017 following the resignation of Carl Bass, Anagnost says he wasn’t initially interested. “But as time went on and I started seeing what the outcomes could possibly be, I began to think I could make a difference. So I put my hat in the ring. I ended up with the job and time will tell if that was the right decision or not.”

So far, it feels right, he says. “I’m passionate about what we’re doing. I enjoy the people, the company and our customers. I think the company is moving forward in ways it hasn’t before: we’re doing things we’ve never done, we’re growing faster than we’ve ever done and we’re acquiring at a scale we’ve never acquired before, which is bringing in more technology. I feel like I’m making a difference so I come to work every day really happy and excited.”

Anagnost was in Dublin to mark the official opening of Autodesk’s new EMEA headquarters in the 1WML building on Windmill Lane. Since announcing the new Dublin site in February 2018, a team of 170 people – 28 nationalities of mainly new hires across sales, localisation and client support functions – has been recruited.

“When you build an office from the ground up, it’s amazing how it is just naturally diverse,” Anagnost says. “There’s 50-50 men and women and multiple nationalities. Just a few people from Neuchâtel, our old corporate headquarters, came but 90% are new to the company.”

One of the company’s key reasons for selecting Dublin as the site of the EMEA HQ was the ability to attract talent. “At the old corporate headquarters, it was getting harder and harder to grow the office,” Anagnost says. “The cost structure wasn’t quite right, there wasn’t a large talent pool and it wasn’t the kind of place where people would naturally relocate to.”

The initial plan was to get to 200 people in the Dublin office but this may increase. “Moving forward, we’re evaluating the other functions and capabilities we might build up here,” says Anagnost. “We will probably build a little bit more of the sales capacity.”

Dublin is also one of several European locations in the running for a planned Autodesk technology centre to focus on artificial intelligence and machine learning algorithms. “It could happen here but there’s multiple cities vying for that work.” According to Anagnost, these include UK and German centres that are particularly strong in machine learning and artificial intelligence.

Globally, the big emphasis right now is on digitising the construction process, Anagnost says. “We’ve just spent US$1bn on acquiring three companies in this area so we’re pretty serious about this. We believe the technology is ready, the customers are ready, and the products are ready.”

Construction is ripe for the kind of efficiency gains the manufacturing sector achieved 30 or 40 years ago, he says. “The built world is under more pressure than ever. If you look at the big ubertrends – population growth and urbanisation – we need to build more and probably rebuild more than at any time in recent history. Yet, it’s getting harder and harder to do it. There’s not enough money and there’s not enough human capacity.”

The answer, Anagnost says, is to industrialise construction to reduce waste, the time it takes to build and costs, while also improving quality. “It’s been very hard to get there in construction because typically, the profession has been very labour intensive and very technology adverse, but that’s changing now.”

According to Anagnost, the aim over the next five to 10 years is to transform construction processes for roads and buildings into methods that look a lot more like those used to manufacture cars and airplanes. Some of these processes that we’re going to see a lot more of in construction include prefabrication, on-site assembly, automated site planning and grading and supply chain management incorporating things like just-in-time delivery and lean methods.

“All of these things coming together are going to really change construction,” Anagnost says. “And it has to change – 30% of the resources on building projects are wasted and 40% of what’s in landfill is from construction. That’s just not sustainable.”

Anagnost believes the industry is receptive to change but notes that some operators are far ahead of the game. “There are so many companies that are moving fast and they really get it. They get that if they adopt more technology, become more BIM-based on their processes, start moving the model from design all the way through to construction, they’re going to be more efficient and their bids are going to be more accurate, which means they’re more likely to make money and hit their schedules.”

One of the industry’s big tasks over the next 10 years is to move construction processes from drawing- to model-based. “We have to help companies create a higher level of model sharing in a low trust environment. That’s going to require technology that enables that, but it’s also going to require people changing the contractual environments.”

Another challenge, Anagnost says, is to make permitting processes less paper-based. Autodesk is trying to create a climate where this is possible by working with governments and owners, for example, to drive BIM mandates into their projects. “There’s a mandate in the UK to use BIM on all public works projects. We’re trying to get that in as many places as possible. We’re also trying to find municipalities and governments that are willing to look at digital permitting processes.”

“I think if we can work with some of these municipalities and demonstrate that, not only are our digital processes more efficient and less wasteful, but they actually result in more rapid and better permitting outcomes, other people will start looking at doing this.”

At the moment, Autodesk is focused on two areas of automation, including the convergence of design and make. Anagnost describes this as the ability to use machine learning algorithms to expose decisions that were classically siloed and separated.

“If we can provide automation that allows designers to see very early on the construction and building implications of their designs, we can get better designs,” he says. “We can also provide the designer with lots of different options for designing and laying out the building. We’re working on technologies that assist designers and engineers in getting design and make decisions closer together and exploring more options at once. That’s an area we’re investing a lot in.”

A subset of this is generative design, where computer algorithms are used to generate design options based on requirements collected by the user. “We’ve done a lot of this in manufacturing, where we create 3D geometry without the user doing anything: they just specify what they’re trying to accomplish and we create the 3D design geometry. That’s instantly machinable because we’ve used constraints of the machine to create the geometry.”

The other area of technological innovation is the process of bringing manufacturing methods to construction and will be facilitated by automation and cloud-based computing, Anagnost says.

“There’s a lot we can do with automation to help make pre-construction planning more accurate and make some of that information available earlier in the design process so people can get quick ideas about what it takes to plan out this construction process and what might it cost.”

While this can be done at the moment, Anagnost says it’s a messy process. “It’s like the merger of two worlds that don’t understand each other. Construction’s very low precision and manufacturing is very high precision. We’re fundamentally bringing a high precision world and a low precision world together. They don’t speak the same language and we’re trying to help them speak the same language so that any changes in the building model are automatically reflected in what has to get manufactured.”

Construction jobs and the skills required are set for significant changes going forward, Anagnost believes. While there will almost certainly be fewer people working on individual jobs, lower building costs will make it possible to do more projects. “We’re going to have a new journeymen class of construction workers who are automation savvy, who understand how to prefabricate and assemble things and are going to be moving from project to project quite fluidly.”

He’s very positive about the future opportunities for people working in the sector. “We believe there will be a lot more jobs on the other side because more people will be able to do more things. But we absolutely also believe we have to invest in skilling those people up, and helping them translate their skills of today to tomorrow. I am an optimist. I see nothing but potential.”

Anagnost describes himself as fundamentally a product person. “I grew up doing product. I’ve always been very passionate about the impact technology has and how you explore the boundaries of technology. My early career at Autodesk was all about products and bringing new products to market. I really do believe that automation in the public good is powerful.”

In terms of his style of leadership, he says he places a big emphasis on ensuring there’s clarity around what the organisation is doing and why. “I try very hard to help the company focus on the most important things and innovate where there’s going to be most impact. If you try to innovate on dozens of different fronts at once, you don’t succeed. I really do try to create priorities, focus, clear articulation of why and let the brilliant people in the company figure out how to do it.

The priority now is on getting construction to escape velocity inside the company before the next big transformation. “We’re getting ready for the next manufacturing revolution over the coming three to five years, which is going to be all about the rise of the configurable micro-factory – the teeny factory down the street that can build anything. It’s got 3D printers and robots in it. You send bits in and solid products come out. That world is coming and that’s the next world we’re working for.”