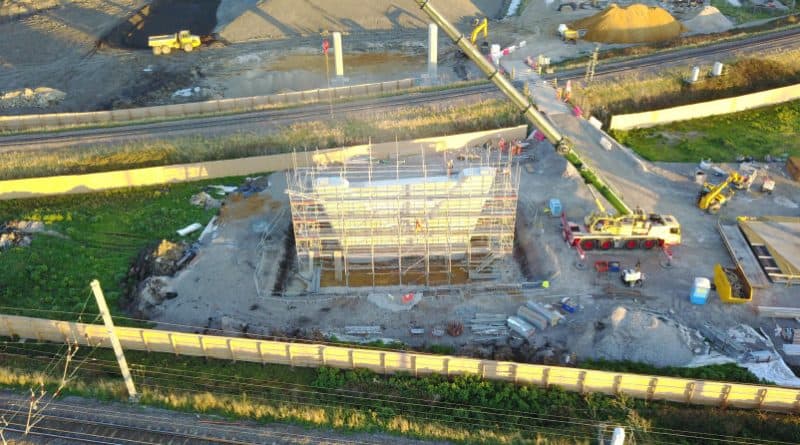 Ely, a small cathedral city in Cambridgeshire, UK, which has a population of just over twenty thousand, suffers congestion on the A142 due to its proximity to Ely train station. In order to relieve congestion, which has been known to cause queues of up to four miles, principal contractor VolkerFitzpatrick looked to Sword Construction, UK-based formwork contractor, and RMD Kwikform to support the construction of a 300-metre long viaduct.

Crossing the River Great Ouse, the viaduct is the first UK project with offset V-shaped piers, which posed some unique challenges to the work.

One of these major challenges was constructing the foundations for the V-shaped piers. The section across the River Great Ouse is supported by two of these piers, one at either side of the river, which are supported by foundations stretching into the water.

This presented a unique challenge for VolkerFitzpatrick. Each pier sits on a piled foundation, placed within a cofferdam that stretches out into the river itself. However, during the planning phase, VolkerFitzpatrick identified that the loads to be placed on the cofferdam base slab would be too heavy for the ground conditions to support.

VolkerFitzpatrick worked with Sword Construction and RMD Kwikform to find a solution. Due to the intricacies of the viaduct and V-Piers, 3D printing was utilised to provide a real-life, physical picture of the solution. This visualisation allowed the team

to streamline the planning process and physically see the working area, allowing them to plan the best way to manoeuvre equipment into the cofferdam.

Ian Hawkesford, Engineer at RMD Kwikform, said: “One of the biggest challenges was forming the piers, due to the offset nature of each side of the ‘V’, the stop ends are not perpendicular to the main formwork, which creates issues when it comes to tying the stop ends in place.

“With each pier being built within a cofferdam, space was always at a premium. During discussions aimed at reducing load pressures on the cofferdam, we came to the conclusion that the best solution was to pour the V piers in two separate pours. Tying through the face of the structure wasn’t permitted and was not possible on the internal faces; so, conducting two separate pours allowed us to keep the amount of propping to a minimum within the footprint of the cofferdam.”

RMD Kwikform supported the project with their newly launched visualisation tool, LocusEye. This allowed the team to visualise the solution with VolkerFitzpatrick and Sword, rectifying any potential issues ahead of time. In addition, through the physical modelling, it allowed for engineers to better understand the tolerances and the movement of equipment. This 3D modelling technique played a key part in the development and design phases of the project. Due to the viaduct’s very complicated geometric structure, which proved difficult to accurately model in two dimensions, RMD Kwikform created over 120 different drawings to highlight the varying dimensions and curvature of the structure, leading to the model being 3D printed.

One major positive for the project was the existing relationship between Sword Construction and RMD Kwikform. Sword are a well-known and respected Formwork Contractor within the Civil Engineering sector and have worked extensively with RMD Kwikform on a number of projects, including Biomass plants in Snetterton and Tilbury, the Ipswich Tidal Barrier and the Astmoor Approach Viaduct as part of the Mersey Gateway project. This previous experience with both RMDK and its products resulted in easier construction and allowed the project to progress more smoothly.

Commenting on the project, Luke Daley, Contract Manager for Sword Construction UK LTD: “The V piers are very unusual and challenging, but RMD Kwikform has shown its expertise in developing a solution for the safe construction of the V Piers and bridge. RMD Kwikform have had an extremely high level of engineering input into the project, with the team performing regular site visits to support.

“In addition, RMD Kwikform developed special formwork to expand the capabilities of the Superslim Soldiers. The special equipment included a curved soldier for the base of the V Pier, angled brackets for access and angled wedges for the stop end shutters.”