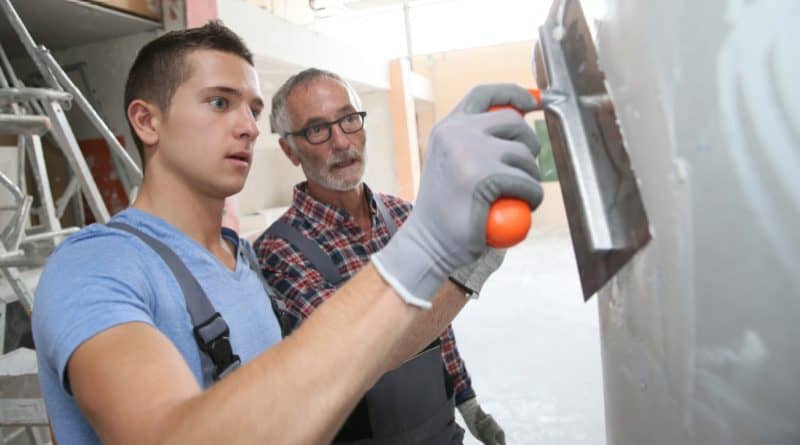 The CIF report titled ‘Trades and Apprenticeships Skills Survey – The Employers Perspective’ provides warning signs for the Government and the construction sector by identifying the lack of skilled tradespeople and apprenticeships as small firms struggle to take on apprentices, Irish building takes a look at the specifics.

This report investigated the uptake in apprenticeships and explored the barriers. For this first of a kind study of the Construction Industry Federation (CIF) membership, the majority of respondents were small to medium size companies employing fewer than 10 people and individually do not employ apprentices in large numbers. However, the report states: “As a group, they represent the largest cohort within the industry and collectively employ more than any other subsection of the sector.” Two findings from the CIF membership survey, present serious implications for the construction industry: 71% of member firms are currently not engaged in apprentice training. 63% of existing trades employers do not employ apprentices.

The report was undertaken by Dublin Institute of Technology researchers for the CIF. Here Irish building speaks to the lead researcher Eoghan Ó Murchadha to hear about the methodology and findings, and to Dermot Carey of the CIF to get his views on the findings, implications and the report recommendations.

Eoghan Ó Murchadha is Assistant Head of the Department of Craft, Design & Construction and a full-time teacher of Carpentry and Joinery at Dún Laoghaire Further Education Institute. He is doing his PhD part-time in the School of Surveying & Construction Management in Dublin Institute of Technology’s Bolton Street campus. Dr Róisín Murphy is Eoghan’s co-author on this report and his PhD supervisor. The aim of Eoghan’s PhD research is to establish mechanisms that can prevent damage to the apprenticeship system in times of economic downturn. A teacher with 20 years’ experience Eoghan witnessed the collapse of the Irish apprenticeship system. Eoghan’s research asks “Can we develop a system that does not collapse in a recession?”

The aim of this study, which is part of his PhD research, was to determine how trades and apprenticeships are being utilised within the Irish construction sector. The research methodology surveyed the CIF’s contractor members. This was a large sample, 229 firms responded. Until this research, there was only anecdotal evidence. Speaking to Irish building, Eoghan says: “There were three main findings that the research uncovered.

1.81% of the respondent firms do employ tradespeople.

2.71% of respondents do not employ apprentices.

3.86% of respondents said that there is an inadequate supply of skilled tradespeople in the industry.”

For to develop trade skills, Eoghan says, it is important that experienced professionals train the younger generation in their craft. However, it was a surprise to see that the number of respondents employing apprenticeships was just 29%. “What we are experiencing now is a skills gap, it can be dealt with and there are recommendations, we do not want this to develop into a skills loss,” he stresses. “This was experienced in Britain and they are still trying to recover their apprenticeship model a generation later. This is a warning for the future of construction in Ireland. A skills loss is a potential crisis waiting to happen. If it does happen, trades’ rates will rise and cause tender prices to rise, and construction clients will take the financial burden. Quality will also suffer!” Asked what the main reasons are that the contractors surveyed didn’t employ apprentices, Eoghan says: “There were many reasons but it came back to the financial cost. Over 90% of firms are micro firms and these organisations do not have the resources to pay the cost and give the time to supervision and to certify sign-off on the training. For Phase 2, an apprentice goes to a SOLAS Training Centre for training, and small firms can’t afford to support an apprentice through this.”

This research is part of Eoghan’s PhD on the system of apprenticeship and the employer is one stakeholder. Over the coming year, Eoghan will survey the other stakeholders in the apprenticeship process: the educators, SOLAS, the apprentices. “It is important to get the views of all the stakeholders,” he says and identifies a major challenge in delivering training. “Since the downturn, a number of the training centres in the colleges around the country closed and it will be a challenge to get these to reopen in the coming years.” Eoghan’s research is valuable to the industry and he encourages others to get involved in researching the skills gap and how we can deliver adequate numbers of highly-skilled tradespeople.

Dr Róisín Murphy stresses the need for quality collaborative research in this area. “The skills shortage across the construction sector is of serious concern. While nationally available labour statistics provide a sound basis for comparative analysis, there remains a lack of high level empirically tested research directly involving construction industry stakeholders. In order to identify solutions to the skills shortages across the construction sector, a collaborative approach to bridging the knowledge gap in this regard is of paramount importance.”

CIF’s Response to the Report

Dermot Carey leads the CIF’s Safety & Training Department, having responsibility for developing and guiding policy in these areas, he tells us why the report was commissioned, and talks about its findings and recommendations.

“The reason for commissioning this survey was because there was a lot of anecdotal information about the recovery of apprenticeship registrations,” Dermot tells us. “We knew that mechanical and electrical apprenticeships were recovering but the wet trades were doing poorly. However, there was no rigorous research being done into why they were doing so poorly, so knowing of Eoghan’s expertise and role in apprenticeship training, the CIF commissioned this report.”

This was the most focused piece of research on apprenticeships the CIF have commissioned. “We were eager to identify what the barriers were for companies taking on apprentices. Some of the key findings were that small contractors were not confident enough to take on apprentices. The reasons for this include financial reasons and discontinuous work demand. It is not evident, when you look at the activity in Dublin and large urban centres, that the lack of work would be the case but the regions still have relatively low levels of construction activity.”

It is evident that contractors feel that the legislative requirements and government requirements around apprenticeships are onerous and putting them under pressure. “We need to encourage and persuade small contractors that taking on apprentices is beneficial for their business,” Dermot says. “The cost of direct employment of trades is expensive. We see how the industry has gone down the route of subcontracting and taking on people for the duration of a project. None of these findings are surprising, but it is good to have factual data from 229 contractors to support the claims. An alarming figure was that 86% of those surveyed think there is insufficient skills in the industry. Only 29% of those employ apprentices and 46% say in the past that they employed apprentices. This shows the significant drop off in those willing to employ apprentices.”

When the industry collapsed ten years ago, the registrations also collapsed Dermot explains. “Between 2006 and 2016, there is a difference of 50,000 registrations for apprenticeships. That is a huge loss of tradespeople. Some people moved abroad and others left for other industries. The nature of the recovery is that the challenge is to find 1,000 people a month to join the industry and this is significant. This report shows that the wet trades are an area of major concern. For example, in 2005, 600 apprenticeships were registered, in 2015 there were 26 bricklayers registered and 52 in 2016. The levels of trades who would be involved in residential construction are very low. If we are to increase housing output we need to increase the number of wet trades’ apprenticeships.”

Small contractors are concerned with continuous workflow and many can only see a few months ahead with regards their work and Dermot says if they register an apprentice they are committing to a 4 year period. He explains the additional barriers: “You need to have a person in your company who has a craft certificate and many small businesses even though they may have decades of experiences do not. Often agency labour is used for the short-term instead of taking on full-time apprentices over a 4 year period.”

Dermot says unless incentives are put in place to help contractors take on apprentices then we will have a major problem delivering housing and projects in other sectors. There are a number of great recommendations within the report he says which could help contractors. “I think to financially incentivise employers would be beneficial. Secondly, from the feedback, it is evident that the structure of the apprenticeship is a problem for employers as three of the seven phases are ‘off the job’ phases and Phase 2 is 22 weeks in duration that the apprentice will be in a training centre. This is a long time for a worker to be away from a small business. One solution is to look at how ‘off the job’ phases can be delivered to suit the employer more, maybe ‘week on, week off’. A relaxing of the regulations around the assessor is also required whereby the visiting assessor comes from an external organisation, instead of the employer having to have a certified person within the business. We also need to look at the supply-side and promote apprenticeship in a positive manner. The industry must provide sustainable careers to attract young people to the trades.”

Dermot says the CIF are considering reissuing the DKM report, originally published in 2016, with updated figures and hope this will be available in September. Regarding the DIT report, he thinks that there are some elements that could be easily implemented and the CIF will be discussing these with SOLAS.