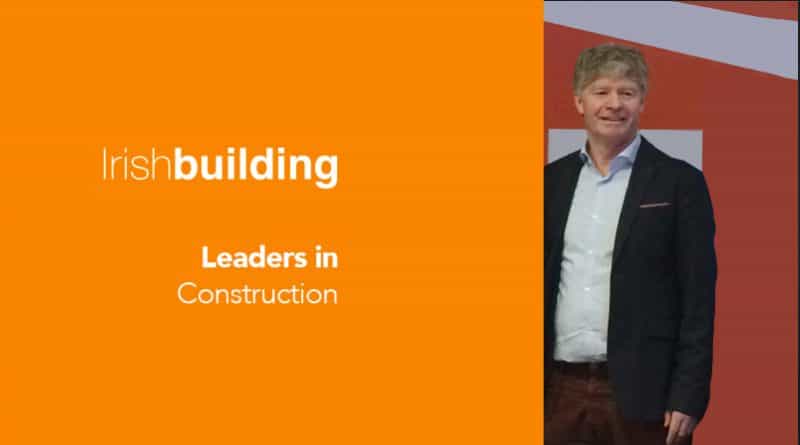 How King & Moffatt’s ethos of investing in the future will ensure their continued success as one of our industry leaders.

2017 was a hugely successful year for King & Moffatt Building Services as they expanded on business in Ireland, the UK and into mainland Europe. With 176 people directly employed across the business, their success is very much embedded in the people who work for the company, which is celebrating forty years of excellence this year.

Pat King, who founded the company along with John Moffatt says the last year has allowed the company to flex its muscles even further. “We made our first move into Europe with a project for Hilton Meats in Lisbon in Portugal, which marked a big step for us. We hit a target of €40m. Lidl Wednesbury was a big key project, which opened us up to the likes of Amazon in the UK this year.”

Business Development Manager Stephen Kiely agrees. “2017 was a very big year for us. It was the first year that the UK arm of the company had a higher turnover than our Irish company. We had a number of key projects in place during the year. The new Combilift manufacturing facility in Monaghan was one of our major projects, it is now the largest manufacturing facility under one roof in Ireland, and we were shortlisted for the ICE Awards for our work on this. We also started on another 600,000 sq ft regional distribution centre for Lidl at Avonmouth.”

Diversification and opening to new markets has been key to the success of King & Moffatt, according to Pat King. “We are always looking for exciting opportunities and new markets to grow in. Almost 4 years ago we opened our Energy Services Division, which has gone from strength to strength ever since. The aim of the Energy Services Division is to provide clients with energy expertise to aid them in reducing their energy consumption, carbon footprint, CO² emissions and overall operating costs. We are also opening into mainland Europe, while continuing to strengthen our partnerships with our existing clients.”

The availability of skilled labour is an issue that can be seen in all aspects of the construction industry, and is something we must invest in to future proof the sector, says the industry leader. “We have invested in in-house training to upskill our employees – we see this as a crucial step. One of our apprentices, Sean Hoey, was recently nominated for Apprentice Electrician of the Year in the National Electrical Awards, so that’s a big deal.”

Culturally, King & Moffatt grow their workforce from within, and this is something they are focusing on in 2018. “One of our big goals at the moment is to take on good apprentices, because like everyone else we recognise the shortage of decent people in the workforce,” says Pat King. “We are working very hard to promote the industry. We go into our local schools along with some of the big names in the industry to promote the positive nature of a career in construction. The CIF backed us on that, so we had a lot of support from some of the big players.”
Historically, the company holds onto its employees, and this is something that the directors are keen to continue. “The people that started their careers with us twenty years ago are all senior management now. We like people to grow up within the company, and that’s what we hope to see with our apprenticeships now.”

As leaders in BIM and technological advances, King & Moffatt have introduced Virtual Reality to their BIM projects in both Ireland and the UK. This enables the client, or anyone involved in the works, to navigate around the actual life-sized 3D model of the project. As well as being an enjoyable experience it removes most of the guesswork that can be associated with a traditional 2D project. Using the VR technology means everybody can see exactly what the finished installation will look like before any physical work commences.

We are not short of talent when it comes to skills in the technological aspect of the construction industry, here in Ireland, says Pat King. “The problem with this country is that we probably don’t have enough courses available. At the moment it’s very much about educating yourself and doing your research and keeping an eye on what’s out there in the market. It is becoming a very big part of the thinking within the top tier contractors in Ireland to utilise technology in offsite building, to make changes – it allows us to move quickly with less cost and waste. We want to be one of the leading contractors in this technology in our country.”

The current procurement processes must change, in order to future proof the industry, says Pat King. “We find that if you have to be chasing every job in very competitive tendering, it’s not a good model going forward. We value our quality of work, and during the difficult time we found ourselves coming up against contractors who were only interested in making a profit.” The biggest challenge in this area is the fact that the price for public works influences everything, says the industry leader. “I know that they are changing it a little bit in some of the bigger projects but at the end of the day, it’s more of an exercise in covering the contractor who charges the lowest price.”

Health and Safety is the cornerstone on which the company culture at King & Moffatt has been built, and they are extremely proud of their accolades in the area. They were honoured to welcome Harry Galvin, President of the National Irish Safety Organisation (NISO), to their Carrick on Shannon Headquarters. He presented King & Moffatt Building Services with the NISO Distinction award, which the company won in October, and he was also kind enough to present King & Moffatt’s Health and Safety Awards for 2017.

They partnered with the CIF for Construction Safety Week 2017 to great success, says Stephen Kiely. “Construction Safety Week began with a pre-start stand down on all projects to explain the purpose of the week and to inform all personnel of the events that would be taking place over the week. Everyone from senior management got involved delivering the daily presentations on Work at heights, Plant and Machinery, Occupational Health Dust, Mental Health and Driving for Work. Following the presentation on Driving on the Friday, all our office staff participated in the one-minute stand down for safety at the Carrick on Shannon office.”

The last twelve months has been one of growth and change, says Pat King, with positive steps made to future-proof the company in the coming years. The company has brought on management consulting firm RSM to advise and help implement a new management structure. “It was historically two directors but now it is going to comprise of six people to ensure stability.

We also see technology playing a huge role both within our industry and across the world as a whole. We are currently upgrading our Microsoft Dynamics Nav and hosting it in Azure to give us real time financial information no matter where the project is located. We have been heavily invested in SharePoint over the past number of years and are currently aligning ourselves with Microsoft as their vision in the space is excellent.”

Continued success can only come about through cautious progress and continued upskilling, says the founder of King & Moffatt, and that is his core takeaway from the year. “During the last year we learned that the economy is not as stable as it appeared. We had three or four major contractors who were very big players exiting the market. From that point of view, it’s making sure that we are very diligent with the people that we are working with. The other thing that we learned is that without question, the future is in technology, and we are committed to continue to lead with excellence in this regard.”