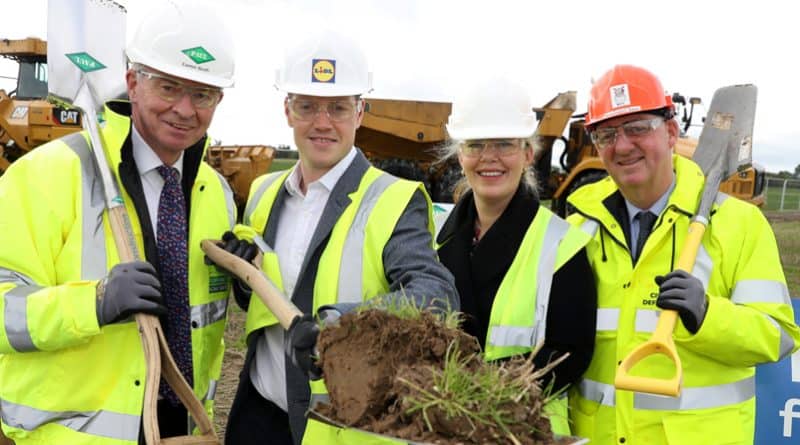 Newbridge, 25th September 2018: Work has commenced on a new €100 million distribution centre and regional headquarters for Lidl in Newbridge, Co. Kildare. The new facility, which is a key part of Lidl Ireland’s €200 million investment programme for 2018, will cost €100m and is expected to be completed by November 2019. This project represents Lidl’s largest single investment in Ireland since entering the market where the company’s total capital expenditure now exceeds €1.8 billion. Once completed, the 54,000 m² distribution centre will be equivalent in size to three Aviva stadia and will create 100 new full-time positions, adding to the 250 staff already employed in the existing Newbridge distribution centre. The new distribution centre will serve Lidl’s network of stores in the Leinster area. Lidl’s 2018 investment programme includes the opening of 10 brand new stores in Fortunestown, Nenagh, Grangegorman, Sligo, Limerick, Castleknock, Birr, Castlerea, Northwood and Dunshaughlin. The commencement of works in Newbridge was marked by a sod turning ceremony performed by Peter Carey, CEO of Kildare County Council.

The construction of this landmark development in Newbridge, one of the largest single construction sites in Ireland, will be managed by John Paul Construction, an Irish-owned leading international construction and infrastructure building company, following a competitive tender.

Speaking at the sod turning, Peter Carey, CEO, Kildare County Council said: “Lidl’s decision to build a major new distribution centre here in Newbridge demonstrates its ongoing commitment to County Kildare where it opened its first distribution centre when it entered the Irish market 18 years ago. Work on this new facility will bring a major jobs boost to the local area with up to 2,000 construction jobs created during the construction phase followed by a further 100 new full-time roles joining the 250 permanent staff already employed at Lidl’s existing distribution centre just off Great Connell Road in Newbridge. The local community will also benefit from the construction of a new relief road locally which Lidl has committed to as part of the development.”

Alan Barry, Director of Property and Central Services, Lidl Ireland added: “Lidl has invested significantly in Ireland since it entered the market 18 years ago. As we continue to expand our operations to meet the growing demand of our customers we are making our single biggest annual investment since 2000. Newbridge and its surrounding areas will benefit from significant job creation while consumers will be able to enjoy access to our expanded range of high quality, low cost produce for which Lidl has become famous. The larger distribution centre will also allow Lidl to handle greater volumes of produce from the 200 strong network of Irish suppliers from whom Lidl already sources over €700 million worth of Irish food and drink products.”

Eamon Booth, Managing Director, John Paul Construction said: “Lidl’s new distribution centre at Newbridge, for which it has committed €100m in investment, will be one of the largest single construction sites in Ireland and will incorporate a range of sustainability initiatives to reduce environmental impact. In choosing John Paul Construction to manage this project Lidl will be able to benefit from the expertise of its Irish-based team located in our Dublin and Cork offices who bring extensive experience not just from largescale projects in Ireland but also from some of the world’s biggest and most complex developments.”