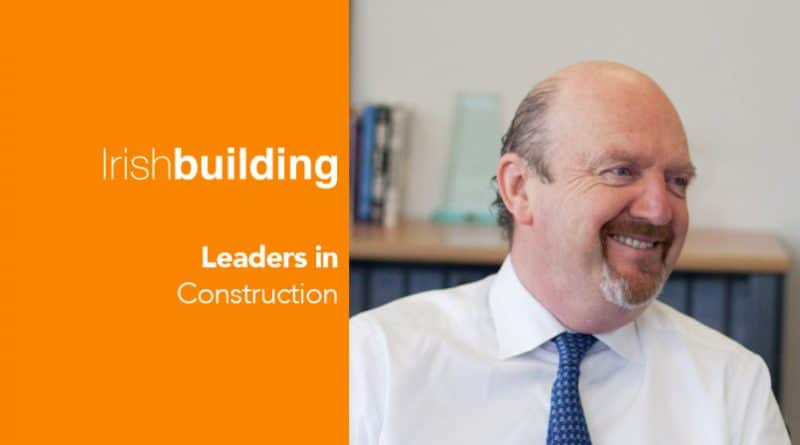 Three years on from a management buyout, Walls Construction is focused on a course of steady and sustainable expansion.

Growth is high on the agenda at Walls Construction but not at any cost, according to managing director, Eugene O’Shea.

The company turned over €162m in 2017, up from €146m the previous year. O’Shea says that while a growth rate of just over 10% in a strong market might not look spectacular, it is very much in keeping with the overall strategy. “When we completed our investor-backed management buyout in 2015, we set out a business plan to grow steadily rather than to risk overtrading. While we’re performing ahead of our business plan, we intend to adhere fairly closely to it.”

That said, the company expects to have revenues of over €200m in 2018. Such an increase is being made possible by the fact that Walls kept its key staff and core management structure during the downturn. “We managed to keep the team together, which was a positive because we can now grow without being dependent on recruiting untried and untested people for vital functions. Ten years on and we have greater professional capacity, allowing us to take on more work in 2018.”

The company, which sub-contracts most of its work, currently directly employs just over 200 people, including site managers, engineers, surveyors and head office support staff.

Commercial office building represents well over a third of the revenue. Recent flagship commercial projects include the new Central Bank of Ireland building on North Wall Quay in Dublin, which was completed in the last year. Given the timing of the job, the Central Bank was a particularly good client to work for, according to O’Shea. “As we were going through our MBO they recognised that we were still the same company that was started by PJ Walls in 1950 with all the embedded heritage and experience that entails. That was very important to us and I like to think our performance on the project reflected this.”

In a similar vein, O’Shea cites LinkedIn as another greatly supportive client through the MBO process when Walls was building its EMEA headquarters at Wilton Place in Dublin 2, also completed last year.

The company is currently on site at Ballymore’s Dublin Landings development, adjacent to the new Central Bank building. The first blocks have just reached completion.

Residential construction, primarily of urban and suburban apartments, represented a sector of significant growth in 2017 and the company expects to complete over 1,000 homes in the next two years. After winning its first project with Park Developments – an office block in The Park in Carrickmines – last year, the company was subsequently contracted by the developer to design and build the five-block Notre Dame apartment scheme in Churchtown. Another recent apartment job was the completion of IRES Reit’s partially built The Maple complex in Sandyford.

Fit-outs make up a significant proportion of the company’s workload and account for around €40m of projects each year. “We have started on the road of separately branding and separately resourcing our fit-out division, so that clients can benefit from the combination of specialist expertise backed by the resources of the overall group” says O’Shea. Current jobs in this side of the business include the fit-out of AIB’s new block in Central Park and European headquarters for both Zendesk and New Relic.

Student accommodation, meanwhile, is a small but growing area for the firm. “It represented a very small proportion of 2017 but will make up a significant amount of revenue this year and next,” O’Shea says. Walls has just commenced work on three sites on North Circular Road and Dominick Street, which are part of GSA’s student accommodation roll-out programme across the country.

International expansion has not been part of Walls’ strategy for growth so far. “During the crash, we looked at the options but we concluded that going to the Middle East, North Africa or the UK was not going to be a short-term panacea for the challenges at home. So, we took a conscious decision to concentrate on the home market: even though profit margins would be low, at least it would be a market we knew. We weren’t going to risk going into new markets, which can require large amounts of scarce working capital.”

O’Shea doesn’t rule out looking at opportunities in the UK market in the future. Requests from existing clients to work with them in that market will probably be the catalyst for that, he says. In the past, Walls had a sister company in the UK that was sold as part of the parent company’s restructuring. “That non-compete element no longer exists so we could go to the UK if we wanted, but we believe that there are sufficient opportunities at home at the moment.”

In the immediate future, the company will be putting increased emphasis on building up its publicly funded workload. “Historically, we have been very strong in third level, particularly in UCD, UCC, Trinity College and NUI Maynooth. We’re on the UCD frameworks for projects of both up to and over €25m and we’re looking forward to competing for those jobs.” The company’s portfolio of work at UCD includes the O’Reilly Hall, Charles Institute and SBI, the Student Learning, Leisure and Sports Complex, and the School of Veterinary Medicine.

The company’s aspiration is to achieve a good balance of work. “The revisions to the Government form of contract have made projects more attractive to the industry in general. We want to participate in that pipeline of work again, because there’s always risk associated with privately-funded projects, particularly in respect of external shocks to our economy or the world economy.”

Regarding its infrastructural investment in general, O’Shea believes the Government needs to take a more long-term view. “The biggest challenge in attracting people into our industry is the fact that we’re so prone to boom and bust cycles. In Ireland, we’re particularly susceptible because we haven’t had long-term planning. In trying to attract graduates or people to do apprenticeships, we cannot point to a sustainable path for long-term careers.”

O’Shea says the Government can address this issue by committing to long-term planning and being to some degree countercyclical. “So, if there’s sufficient private money in the market the Government stays out of it and waits until there isn’t. That delivers a double win – value for money and keeping volume in the industry. However, we do acknowledge that it is difficult for government to do that, particularly when there are infrastructure deficits that impact on urgently needed public services. But if you plan properly and address that deficit, you should be able to have a more sustainable construction industry.”

O’Shea believes the construction sector is highly efficient and adaptable and therefore an important resource that can be used for the public good. He believes the industry is frustrated at government efforts to address the housing crisis. As a national emergency, the Government has at its disposal many mechanisms to short circuit both planning and procurement log jams but seems unwilling or unable to use them, leaving the industry with the ability to deliver these homes, standing by, unused.

In principle, however, he applauds the fact that there is an infrastructure plan. “And there have been successes in the past. Our transport networks are vastly improved, an improvement which will continue with further investment and many parts of our towns and cities have been transformed by high quality regeneration.”

Walls itself will be focused on trying to continue do things correctly and sustain the business for the next generation. “Sometimes people can read that as us being somewhat unadventurous and conservative. We would accept that, but we believe that when building places where people work or homes where they live, we want them built properly. We are not in it for the short term.”