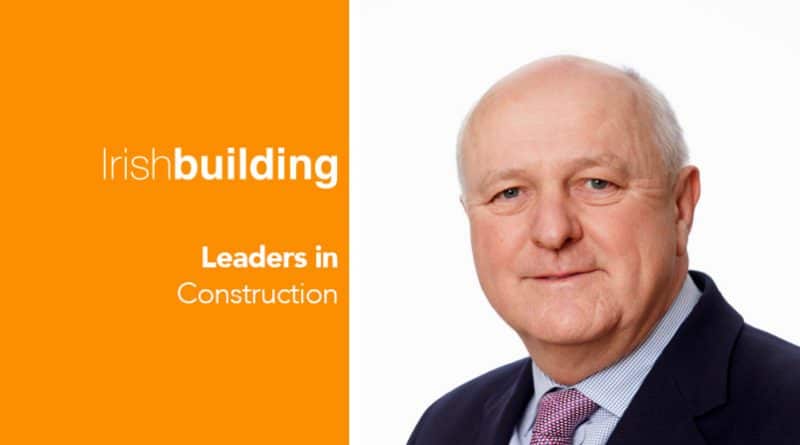 Being selective about the projects it works on is paying off for Sisk, which has just posted details of another very successful financial year.

Three years into his tenure as chief executive of John Sisk & Son, and two years after a significant restructuring of the UK business, Stephen Bowcott has plenty to smile about.

Revenue in the construction company’s Irish business hit €700m in 2017. It may not be quite back to boom levels, but Bowcott describes it as a very successful financial year, due in part to not having a single loss-making project on site. “We’ve been very selective in what we choose,” he says. “That’s the art in construction – avoiding the difficult, loss-making projects.”

Building work accounted for around €600m of last year’s Irish turnover, with civil engineering making up the other €100m. Bowcott is expecting the company’s civil engineering earnings to fall in 2018, while construction should top the €800m mark.

On the civil engineering side, he notes that Sisk has recently completed several substantial projects, including the Cross City Luas extension in Dublin and a wastewater treatment plant in Cork. “We’ll be starting some smaller jobs this year but there’ll be a big gap with the larger projects.”

On the building side of the business, meanwhile, another landmark project – the €70m redevelopment of Páirc Uí Chaoimh in Cork, which earned Sisk two honours at the Irish Construction Excellence Awards, including the ICE Project of the Year Award – has also recently finished.

But there is a strong pipeline to replace this work. Towards the end of last year, the company was awarded contracts to build 470 lodges and 30 apartments at the Center Parcs Longford Forest resort, as well as the holiday village’s central building, which includes a swimming pool, bars, restaurants and shops.

We are also working on the iconic redevelopment of The Curragh Racecourse in County Kildare which will see the new main stand finished next year. We have recently gone to site at the DIT Grangegorman Campus where we are building student accommodation and we continue to deliver high quality office projects for clients.

The UK business, which was restructured and significantly downsized in 2016, is now being rebuilt. Turnover in 2017 increased in line with expectations from 2016.

The private rented sector (PRS) is a particularly strong source of work for Sisk in the UK market at the moment. For example, it is currently working on a £211m contract with Quintain to build Canada Gardens, a 743-home build-to-rent development across seven buildings in Wembley Park. It’s Sisk’s ninth project at Wembley Park.

In Manchester, it is the main contractor on a £247m private rental scheme at Circle Square, which will deliver 677 apartments for Select Property Group.

Other work in the UK includes an £88m hangar for Boeing at Gatwick Airport for the new 777x aircraft, and the £190m fourth phase of Great Ormond Street’s redevelopment programme. The company is also the main contractor on the International Convention Centre Wales (ICC Wales) in Newport. “We used the experience of building The Conference Centre Dublin to win that project.”

Bowcott says Sisk tries to choose the projects it bids for and generally wants to work with clients it already knows. As a result, its top 10 customers – including Microsoft, Johnson & Johnson, Clancourt, Kennedy Wilson, TII, Quintain and Network Rail – account for just less than half of the total workload.

It’s a policy that has taken the company into Europe: Sisk recently started to build in Sweden and Switzerland for Irish-based FDI firms. And the Irish office continues to work across Europe for Primark, completing an average of three stores a year.

Bowcott is confident of continued growth in the market. “Up until September last year there was a lot of work out there. We had a lull for a few months but then it took off again and the market for building construction is really positive.”

The civil engineering landscape is another story, however. “The government has been too slow in investing in design and project appraisal to get the projects on site quick enough. So we are now facing up to two years of very low activity in the civil engineering market.”

The situation with low-cost housing is similar, he says. “We set up a new team 15 months ago to build only social housing. We picked up two affordable housing contracts, both of which are finishing now, but the rest are just not coming through. The reason, we’re being told, is that there’s insufficient land in local authority ownership to release. But plenty of public bodies have masses of land ready, so I think a real unlocking of that is needed.”

Bowcott says his team can build high quality houses for up to €170,000 per unit. “Meanwhile, social housing providers have to buy similar units for over €300,000 each from speculative developers.”

He describes the National Development Framework 2040 as “fantastic, as long as we deliver it, and not in the last 10 years.” A big believer in the economic value of infrastructural investment, he’s hopeful that Finance Minister Paschal Donohoe will increase spending in the short term.
In terms of attracting more inward investment, the planned Metro North is critical, Bowcott says. “If you speak to chief executives, they love being in Ireland. But they need three things: to get from the airport into the city quickly; to get the right quality of graduates; and executive housing and schooling. Infrastructure, housing and education are so important for attracting business.

“If the Minister can bring forward this infrastructure budget, I think it’ll start sending the right signals.”

As regards challenges in the industry, he believes salary inflation is a looming problem. “Wages are rising in a sustainable way now and I’m fully supportive of that and we need to see a matching rise in productivity. We need to learn from London, Manchester and Birmingham where the wages went up and productivity dropped like a stone.”

Innovation in construction in recent years has had a huge impact on the company’s own processes and on the wider industry, Bowcott says. He points to Capital Dock, where one of the three blocks has been built entirely in pre-cast, including the structure, cladding and mechanical and electrical main cores. “That’s been fantastic from a safety and a quality
point of view.”

The company has also trialled robotic bricklaying. “It definitely works,” he says. “The problem is you need too big an area to make it work so for city centre sites, it just isn’t feasible. But I don’t think we’re far away from robotic logistics.”

However, these changes and the fact that so many people have returned to the industry after being away from it for several years have increased safety concerns, he says. “For example, the off-site fabrication work we now do brings a different risk. It’s been a challenge in Ireland because we had eight years of no building.”

Health and safety has been a key priority for Sisk in recent years and Bowcott says significant progress has been made in creating a no-risk culture. The company is now working to improve the mental health of employees.

“We are six times more likely to have a suicide on our site due to mental health than have a fatal accident. In the construction industry, one in four people under the age of 28 has suffered from stress or mental health issues.”

Sisk was the main sponsor of the Mental Health and Wellbeing Summit in Dublin last year and will continue the partnership in 2018. The company has also introduced its own wellbeing programme, which is focused this year on identifying and reducing stress in the workplace, encouraging people to talk about how they feel, and providing help where it’s needed.

Trying to attract more women into the sector is also an objective. Women currently make up 18% of the company’s workforce. “We have to work very hard in the education system to try to get more women into the STEMs, which is at the root of our problem. We have a lot of work to do on our side to make it more palatable.”

But Bowcott, who joined Sisk after 40 years in plcs in the UK, has been pleasantly surprised by the number of women on boards in Ireland. “I go to a lot of networking events and see a lot of influential women in chief executive, managing director and director roles. My impression is there’s far more women in decision making roles than in the UK.”

He’s generally optimistic for the Irish economy going forward – provided the right infrastructure is put in place. “There’s great opportunity for really good employment and I think Ireland is always moving ahead of the competition. But I am worried about productivity.”

The company, he says, has come out of what was a difficult time to good days. “We’re driving forward with our objectives with good cash in the bank, good profits, good employee retention and customer retention. It’s working for us at the moment.”