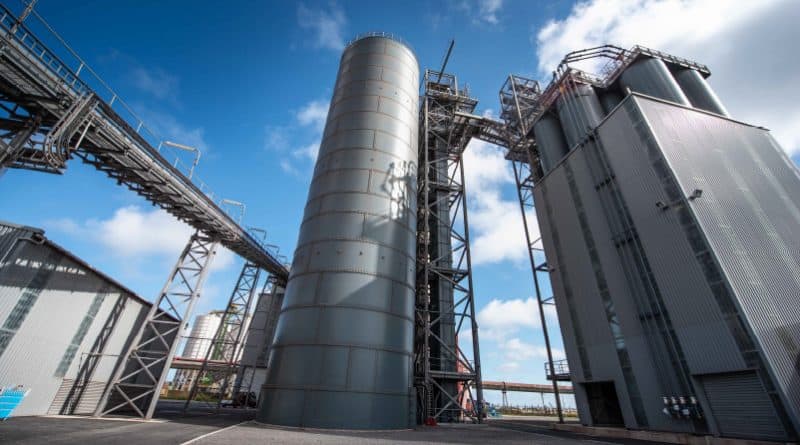 This new production plant is located adjacent to ArcelorMittal’s blast furnaces in Dunkirk. Preliminary works began in September, 2016 with the foundation stone being laid at the beginning of 2017. Works completed over an 18 month period, following an investment amounting to €37 million by Ecocem France, which is a joint venture between ArcelorMittal and Ecocem Materials Ltd. The initiative will create 26 direct jobs by the end of 2018, expanding to 35 direct jobs in the longer term. The plant’s activities will also generate indirect employment, particularly in the maritime and road logistics sectors.

The Dunkirk site has an initial production capacity of 750,000 tonnes, which has the potential to increase to 1,400,000 tonnes. The new Ecocem site is in excess of 5,200m² and equipped with a vertical mill, mixer and storage facilities on a 4-hectare plot in the port of Dunkirk.

Both Ecocem and ArcelorMittal share the same strategic objectives of adding value to blast furnace slag. Their willingness to pursue this strategy together was recently strengthened with ArcelorMittal’s share of Ecocem France’s capital increasing from 30% to 49%.

The proposed product line is similar to the Fos-sur-Mer plant in the South of France where Ecocem France invested in the construction of new silos and a mixer on the local ArcelorMittal site in 2016. The two French plants comprise state of the art facilities and equipment, which enables Ecocem supply the region of France as well as other countries through exports.

Dunkirk, a door to Northern France, the UK and Northern Europe.

With this new production plant in Dunkirk, Ecocem France has access to the markets in the North of France and the Ile-de-France region which includes the Paris region. From Dunkirk, Ecocem will supply the markets in the United Kingdom and Northern Europe. The plant has already planned exports of 250,000 tonnes of GGBS (Ground Granulated Blast Furnace Slag) to England via existing terminals in London and Manchester/Liverpool. The plant will also export 50,000 tonnes of GGBS from Dunkirk to the Ecocem terminal in Sweden.

“With this new facility, we are doubling our production capacity on French soil and strengthening our links with our partner, ArcelorMittal. Thanks to our network of sites in Europe and the strategic location of Dunkirk, Ecocem is in a position to supply major infrastructure projects, such as those in Greater Paris in the Ile-de-France region, the Seine-North canal and even those in Northern Europe”, said Donal O’Riain, Managing Director of Ecocem Materials.

“We are delighted about this new stage in our partnership with Ecocem”, underlines Eric Niedziela, CEO of ArcelorMittal Atlantique et Lorraine.

“In 2016 and 2017, ArcelorMittal invested €18.5 million purchasing two granulators in Dunkirk so that Ecocem could set up there. Today we are seeing the culmination of this effort, which will enable us to add value to our slag in relation to a circular economy.”

The production of GGBS, a green and worthy industry

GGBS is an environmentally-friendly material approved by new industry standards and leaders in the construction sector (Building and Public Works). It is used as a substitute for traditional cement in concrete production with its technical and environmental qualities making this material an indispensable asset for construction Northern France and Northern Europe. The production of GGBS enables the recycling of blast furnace slag, a by-product of iron and steel-making which in turn adds value to the European Circular Economy by create a secondary raw material. GGBS facilitates significant reductions of the environmental impacts of concrete by significantly reducing CO2 emissions up to 34 times that associated with the production of traditional CEM II cement. One year of production at the Ecocem Dunkirk plant will negate 492,000 tonnes of CO2 emissions, which is the equivalent of what 200,000 cars would produce in one year.

Ecocem France is a subsidiary of Ecocem Materials LTD, founded in 2000 in Ireland. Today there are two other subsidiary companies located in Ireland (Ecocem Ireland) and in the Netherlands (Ecocem Benelux), with the Dunkirk plant being the company’s fourth production site.