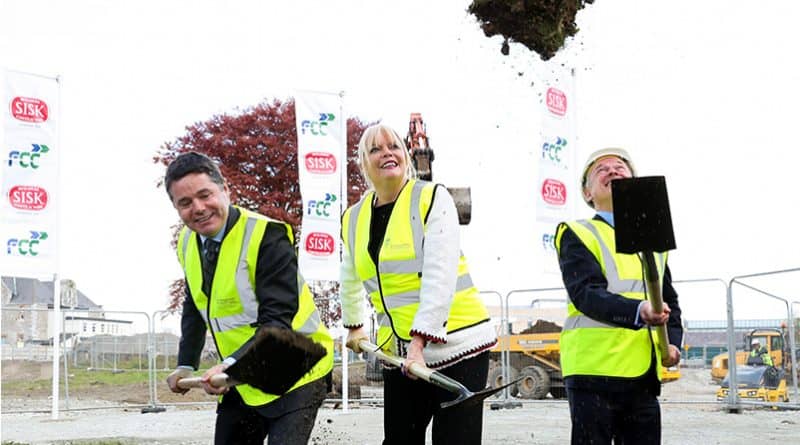 The Minister for Education and Skills, Richard Bruton, T.D., the Minister for Finance and Public Expenditure and Reform, Paschal Donohoe T.D. and the Minister of State for Higher Education, Mary Mitchell O’Connor T.D., today turned the sod on the new 52,000m2 building project for DIT on the Grangegorman campus.

This Government is committed to making Ireland’s education and training system the best in Europe by 2026. State of the art higher education facilities are important to delivering on this ambition. The Grangegorman development represents one of the most significant investments in infrastructure for higher education in the history of the state.

The development will span 52,000m2, creating at least 1,000 jobs in the construction industry over the lifetime of the project. The investment will see a new Central Quad and East Quad being built. The Central Quad will accommodate academic activities and facilities required for a total of ten schools from the College of Sciences & Health, College of Engineering & Built Environment and the College of Arts & Tourism. The East Quad will accommodate the majority of academic activities and facilities required for the College of Arts & Tourism which currently consists of six schools, four of which will be accommodated within the East Quad building.

The completion of these flagship buildings will mark a huge step forward in progressing the consolidation of DIT on the Grangegorman campus and will add to the changing landscape of the new Grangegorman urban quarter, which already includes the Phoenix Care Centre, the Grangegorman Primary Care Centre (opened this year), the Greenway Hub, the new playing pitches, playground and walking/jogging track.

Minister Bruton said “We have set the ambition to make Ireland’s education and training service the best in Europe by 2026. Delivering high-quality facilities for our higher education institutions is important to achieving our goal. With that in mind, I am delighted to be here today to turn the sod on these critical infrastructure projects.

The Minister of State for Higher Education, Mary Mitchell O’Connor TD, said “It is great to see construction now starting on these projects. The facilities being delivered here at Grangegorman demonstrate the Government’s commitment to supporting excellence in higher education. The buildings will enhance the attractiveness of DIT and the future Technological University for Dublin to students nationally and internationally.  Ireland continues to attract international firms to our country for a number of reasons but the standard of our education and our talent is very much an underlying factor.”

The Minister for Public Expenditure and Reform Paschal Donohoe TD, said “The start of construction on these important buildings represents another important milestone in the Government’s Public Private Partnership (PPP) programme. The Government has placed a firm emphasis on investing in the higher education sector. It is a top priority and this project is proof of that. Grangegorman is already flourishing under the careful stewardship of the Grangegorman Development Agency and following on from the arrival, some time ago, of the first students. I will be keenly following the progression of the build over the coming two years, the impact its development will have on the surrounding communities and look forward to welcoming the new students to the new campus in 2020.”

Ger Casey, Chief Executive Officer of the Grangegorman Development Agency (GDA) said “Breaking ground on the Central and East Quad project is hugely important for the GDA. Not only does it mean that we are a step closer to half of DIT moving to Grangegorman but it allows the agency to move forward with other aspects of the overall development. I would like to acknowledge the immense work done by all of our colleagues in the Department of Education and Skills, the National Development Finance Agency, the European Investment Bank, DIT and all of our stakeholders and project partners who have helped make this happen.”

Professor Norton of Dublin Institute of Technology, said “A huge amount of work by many people – with the support of Ministers Bruton, Donohoe and Mitchell O’Connor – has enabled us to reach today’s major milestone for DIT.  In two years’ time, over 10,000 students and 600 members of staff will be based on this fantastic city-centre campus, including musicians and artists, scientists and engineers, culinary artists and event managers.  They will have the opportunity to interact with one another, sharing ideas, playing sport, building communities.  The vision is for this campus to be integrated in Dublin’s historic city centre, culturally and economically, bringing new life and opportunity.  We are grateful to so many supporters and colleagues for coming today to mark the beginning of this exciting development.”

The contract for the provision of these buildings has been entered into with Eriugena consortium, which includes Macquarie Capital Group Ltd., Irish Construction Company John Sisk & Son (Holdings) Ltd., FCC Construction (Ireland) Ltd. and Sodexo Ireland Ltd.   The National Development Finance Agency (NDFA), which was responsible for the procurement of the project on behalf of the Department of Education and Skills, will also monitor the construction phase.