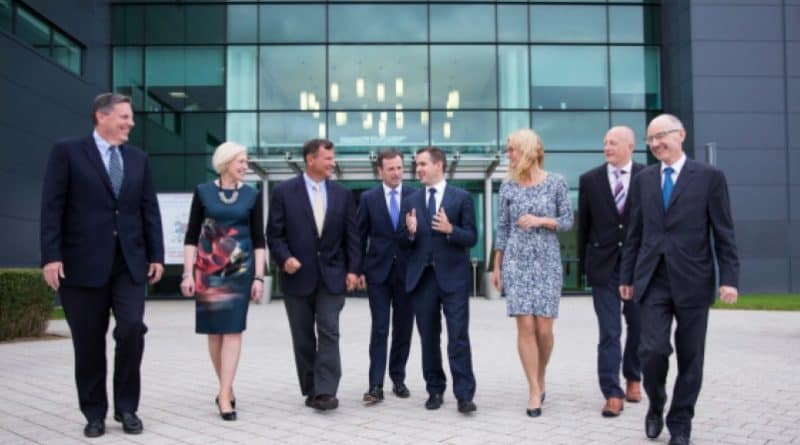 Janssen Sciences Ireland UC has just announced the expansion of its Ringaskiddy, Co. Cork facility that will allow it to meet the critical needs of patients around the world.

The development plans involve an investment of more than €300 million that will increase the existing manufacturing space by an additional 19,100m2, provide employment for up to 450 people during construction and an extra 200 people once completed.

The announcement was welcomed by An Tánaiste and Minister for Business, Enterprise and Innovation, Frances Fitzgerald TD who said “I warmly welcome Janssen’s ongoing commitment to Ireland with this expansion of its manufacturing facility in Ringaskiddy.  The pharma industry makes a huge contribution to the Irish economy in terms of jobs and manufacturing exports, and is one of our fastest growing sectors. This expansion announced today by Janssen is a strong commitment to our country and I wish them continued success.”

Confirming the expansion announcement on behalf of Janssen, Remo Colarusso, Vice President, Manufacturing and Technical Operations, said “this expansion will increase Janssen’s global manufacturing capacity of biologic medicines, which is in keeping with our Credo commitment to provide the highest quality products to patients. Our Ringaskiddy site is an important part of Janssen’s global manufacturing network and this expansion will allow us to grow in a location that offers an advanced infrastructure, a high-performance culture and top-level talent.”

Kyran Johnson, General Manager, Janssen Supply Chain Ireland, said “this expansion project is a significant vote of confidence in our team and one which will increase our manufacturing footprint very significantly, allowing us to continue to meet critical patient needs in the areas of Multiple Myeloma, Rheumatoid Arthritis and Crohn’s Disease.”

Martin Shanahan, CEO, IDA Ireland, said “Janssen has a considerable footprint in Ireland.  This investment in Ringaskiddy will have a significant economic impact in the South West Region both during the construction phase and when the facility is fully operational.”

Janssen Sciences Ireland UC has operated a biopharmaceutical supply chain facility on its 40 hectare site in Ringaskiddy since 2005.  The proposed expansion project includes the following elements:
·      Construction of a new manufacturing building.
·      Expansion of the existing warehouse building, laboratory and administration buildings.
·      Modification of expansion of other aspects of the existing site and infrastructure, including utilities, car parking, underground services, internal roads, yards and pipe racks.
·      Expansion of the on-site waste water treatment plant to accommodate increased volumes.

Construction on the Janssen Sciences Ireland UC expansion is expected to take approximately two years, beginning in October 2017.  On average, up to 450 people will be employed during the construction period.

Janssen Sciences Ireland UC manufactures products indicated for the treatment of conditions that include rheumatoid arthritis, psoriasis and cancer.  Established in 2005, there are 555 people working at the Ringaskiddy, Co. Cork facility.  In 2016 the company became the first pharmaceutical manufacturing company in Ireland to receive the Business Working Responsibly Mark for its commitment and activity towards creating responsible and sustainable business practices.