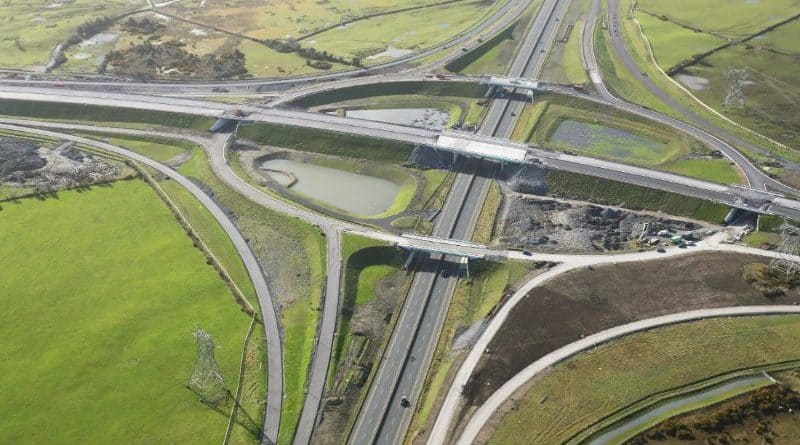 The new motorway has been delivered by the Direct Route Consortium*, which includes John Sisk & Son, two months ahead of schedule and on budget. It was officially opened today (Wednesday) by Mr. Shane Ross, T.D., Minister for Transport, Tourism and Sport, in the presence of Cllr. Eileen Mannion, Cathaoirleach of the County of Galway.

Commenting on the official opening, Pat Lucey, Managing Director of Civils UK & Ireland at John Sisk & Son said: “John Sisk & Son is delighted to have delivered the M17 M18 Gort to Tuam Motorway Scheme and to be a part of its official opening today. It was our aim from the start to deliver this project safely and on time and that has now been achieved within budget.”

“The 56km of new road will bring a huge improvement to connectivity west of the Shannon and multi-national companies like Apple are showing great vision in planning a major facility close to the new interchange on the M6 which is 180km from the M50, 69km from Shannon Airport and 80km from Knock Airport. It’s the type of development that is needed to counteract the regional imbalance and it is infrastructure like this that makes it possible,” he added.

Speaking at the opening Minister Ross said: “This is my first major road opening as Minister for Transport so I am delighted that the M17/18 road scheme has been completed two months ahead of schedule and on budget. This new motorway is a huge boost for the western seaboard area. It will enhance employment opportunities, benefit tourism and help address traffic bottlenecks at Tuam, Claregalway, Oranmore, Clarinbridge, Kilcolgan and Gort. I look forward to using it.”

The Minister for Finance and Public Expenditure & Reform, Paschal Donohoe TD, also welcomed the opening of the motorway, which he noted had been delivered, by PPP, two months ahead of schedule saying: ‘Today’s opening of the M17/M18 Gort to Tuam PPP motorway marks yet another major milestone in the delivery of the Government’s PPP programme and represents a significant investment by the Government in national infrastructure in the west of Ireland. The new road will reduce journey times and increase safety while also representing a major step in enhancing regional connectivity in the West’.

The overall scheme value is €550 million.

Michael Nolan CEO of Transport Infrastructure Ireland (TII) said: “Todays’ opening marks a significant milestone for TII in delivering on our remit to provide a safe and efficient network of national roads. The M17/M18 Gort to Tuam motorway enhances connectivity along the Atlantic corridor and also provides a strategic national link across the country through the M6 Rathmorrissy junction.”