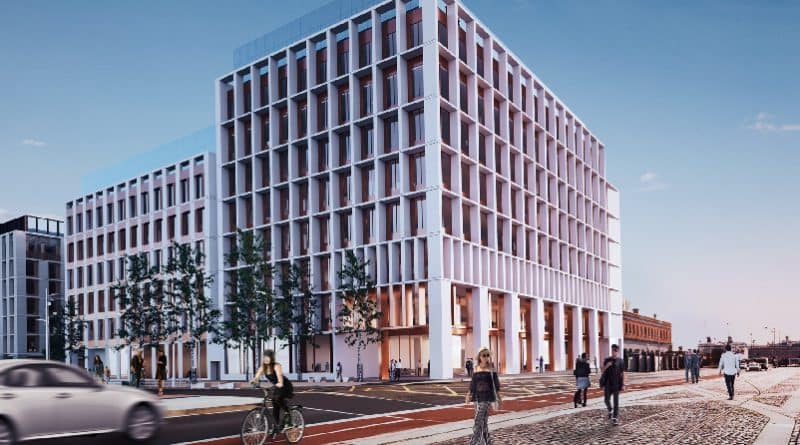 Targeted Investment Opportunities (‘TIO’) has just announced that it hopes to initiate construction on a significant commercial development at 91-94 North Wall Quay this autumn.

TIO are currently seeking an amendment to the existing planning permission that will allow construction to commence on a large new development to include a luxury hotel and over a quarter of a million square feet of office space.

Justin Bickle, Chairman of TIO and Managing Director of Oaktree, commented: “This exciting development at North Wall Quay will provide much needed high quality commercial office space in the heart of Dublin. TIO have successfully developed several major commercial developments in Dublin’s docklands over the last five years and we are confident that our property at 91-94 North Wall Quay will positively enhance the city’s commercial office space.”

The property occupies a prominent riverfront position between North Wall Quay and Upper Mayor Street with Castleforbes Road to the East and the 3 Arena on the western boundary. In the immediate vicinity of 91-94 North Wall Quay is an urban quarter comprising modern office blocks, The Point Luas stop, the Gibson Hotel, Odeon Cinema Point Village and the neighbouring 3 Arena.  JLL and Savills will be appointed as letting agents.

TIO is currently developing a number of major commercial and residential developments in Dublin’s docklands. They pre-let, constructed and sold 8 Hanover Quay which is now the flagship European headquarters of AirBnB. TIO is also responsible for the pre-let, construction, and pre-sale of 13-18 City Quay. The building was pre-let to Grant Thornton, constructed by Bennett Construction, and pre-sold to Irish Life. These developments are the first two major pre-lettings completed in the South Docks area during the current development cycle.