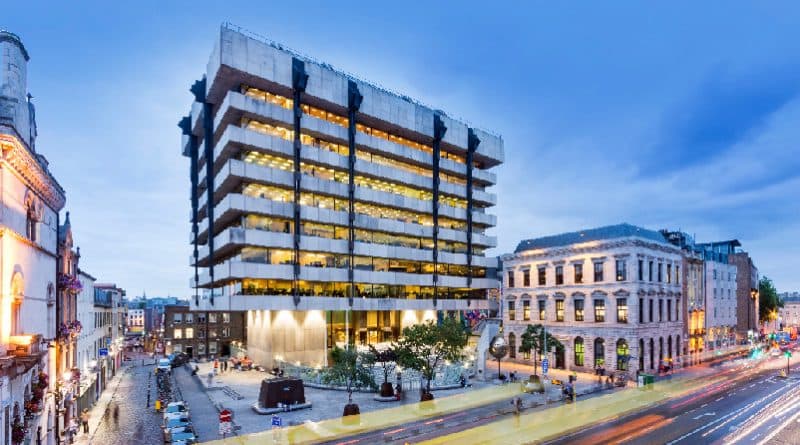 The Outlook for 2017 from Lisney, one of the country’s leading estate agents shows projections for growth across many property sectors in Ireland, and as a result, positive movement for the Irish construction industry. Managing Director Duncan Lyster took time out of his busy schedule to chat with Irish building about the areas within the property market that will have a significant impact on the Irish construction industry.

Almost 320,000 square metres of office accommodation were under construction at the end of 2016 in the Dublin region. Lisney estimate that construction with commence on a further 46,500 square metres in 2017/2018 and complete before 2020. Lisney cites developmental finance as a major challenge when it comes to new office builds and says that the market will be effectively self-regulated in the coming years. “Construction in the office market in Dublin particularly and to a lesser extent in Cork has started, and we are seeing some speculative development,” Duncan Lyster tells us from his Dublin office. “As is always the case there is more sites with planning permission than will be built as and not everybody has the financial firepower, courage or other ingredients it takes to get building. While maybe a year ago we were concerned about supply late this year and early next year, that concern has been pushed down the line because not everybody will be in a position to build.”

The pipeline of new supply of office space up to 2020 in addition to any refurbishments that will occur over the period, plus used space coming back to the market is pretty predictable, according to the Lisney report. “What may change is that the demand side could be affected by a shock,” says Lyster. “Usually you don’t overbuild, usually demand is hit by a shock. Demand has been very consistent with the office market in Dublin. If you look at take-up, it’s hovering at around 2 million square feet pretty consistently. It may have fallen down in the recession but for the last few years it has been very solid.

Changes in rental costs and rental legislation have yet to filter down through the office rental market in Ireland, according to Lyster. “International companies are probably more acquisitive than domestic businesses in terms of what they’ll take. I think Irish businesses are a little more wary that rents have moved so much in the Dublin area (they have almost doubled over a pretty short period of time),” he explains. “The rent increase is fine if you are an international company with serious finance behind you, but for many Irish companies with predictable margins, it means perhaps considering doubling the price of office space per head in a company. One thing we haven’t quite got to grips with is the change in legislation in terms of rent reviews. Irish businesses are conditioned to the old mindset of rent and minds haven’t necessarily kept up with the rebasing of rents that happens after an upward or downward rent review.”

A New Form Of Housing

2017 will be a stabilising year for the residential market, says Lisney. Price growth will be moderate, with models suggesting between 4 and 5%. 2017 will be a strong year for apartments in modern schemes. Although large numbers of investors are leaving the market, some are entering it. The Government’s Rebuilding Ireland action plan will enable an increased number of large scale residential developments obtain planning permission, and assistance to local authorities with the provision of infrastructure will significantly expedite construction works on many sites, they say.

The cost of construction remains too high and a strong argument remains for the temporary reduction of VAT on new homes and a reduction in the cost of local authority development levies. Such measures would increase the economic viability of many projects and ultimately help to increase supply. Lisney expects continual lobbying of the government in relation to these issues in 2017. “People think that site values have gone up and they have but people are talking about 7-9% cost inflation,” says Duncan Lyster. “It really changes the dynamic of the decision to build. We are seeing people doing cost plans and going to tender and realising costings to be far more expensive down the line.”

Several Government-introduced legislative measures will have an impact on the flow of housing construction throughout 2017, according to Lisney. The recent measures introduced to the Finance Bill to change the tax treatment of firms using Irish Collective Asset-management Vehicle, Qualifying Investor Alternative Investment Fund and Section 110 structures will also have an impact on the land market. Many of the international firms active in Ireland have utilised these vehicles when purchasing these sites in recent years and will have to reassess their building plans as they may incur significant tax liabilities on new purchases.

The build-to rent residential sector emerged in Dublin in 2016 and looks set to expand during 2017. Various international pension funds and investors have identified Dublin as an ideal location for these opportunities. Minister Coveney has instructed planners and local authorities to prioritise the facilitation and delivery of these schemes and Lisney expects this sector to be one of the fastest growing ones of 2017.

One of the biggest areas of growth in both Dublin and Cork, says Duncan Lyster, is in the provision of student housing. “There will be a lot of student accommodation built in Cork particularly where you have a lot of people commuting long distances to UCC and CIT. We’ve heard stories of people who think nothing of travelling fifty kilometres to get to college so the demand is there. Purpose built accommodation frees up housing stock for other markets and gives students the kind of housing that they need. It’s potentially a big growth area for construction.”

The Return Of Industrial & Fit Outs

The demand for industrial space is on the up, says Lyster, and that will see a return to design and build industrial units throughout the country. “They are not difficult or particularly expensive buildings to build, but there is an increasing demand for them,” he explains. “There are occupiers who need a particular size building and who will pay more than the perceived market price because they need it in order to run their business. It’s a general reflection of the economy that over the last seven or eight years we have worked through that overhang of space.”

While large-scale retail developments are not in the pipeline for 2017, what we will see is an increase in the number of store fit-outs. Lyster cites the German supermarket chains as an example of a sector that is exploring extensive fit-outs. Pub and restaurant fit-outs continue to be an area in demand, particular in highly populated areas, he says.

Brexit will have a positive impact on the Irish office market, says Duncan Lyster. “I speak conservatively, because ultimately we don’t know what’s going to happen, but projections look good.” He says that the American political situation could spell a more troubling time for American companies already resident in Ireland, but “I am confident that our government are nimble enough to navigate the way.” While the political landscape is uncertain, the future remains bright for construction and the property industry in Ireland. With continued growth across the entire sector, Lyster is happy to report that 2017 should be a positive year for both industries.