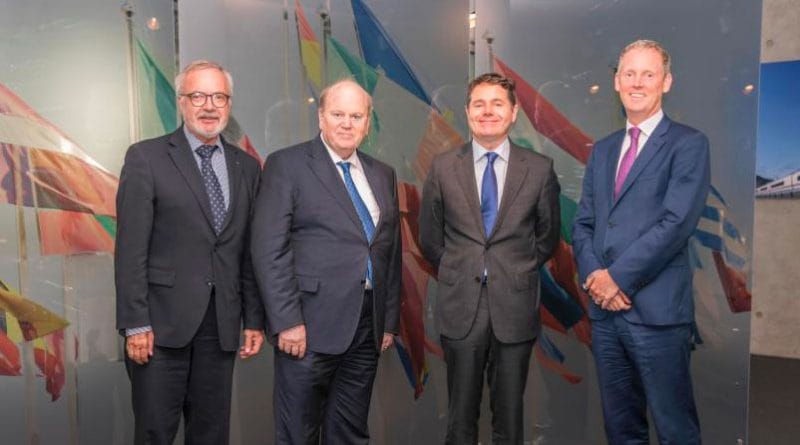 “The two day visit to the European Investment Bank headquarters by Ministers Noonan and Donohoe comes at a turning point for the EU Bank’s engagement in Ireland. In recent years the EIB has supported Ireland’s impressive recovery across key sectors, with projects around the country, and we look forward to working closely to ensure a strong future for the country by backing small business and tackling infrastructure needs. The broad focus of the EIB’s involvement in Ireland would not have been possible without the firm resolve of Minister Noonan to ensure that no opportunities were lost to overcome challenges and unlock transformational new investment.” said Werner Hoyer, President of the European Investment Bank.”

Speaking in Luxembourg today Michael Noonan T.D., Minister for Finance of Ireland and Governor of the European Investment Bank said: “The European Investment Bank has played a key role supporting transformational investment across Ireland for more than 40 years and both increased and broadened engagement in recent challenging times. We are anxious to grow Ireland’s social and economic infrastructure. We welcome clear progress to explore possible access to EIB funding for projects that are economically necessary. Continued discussions with the President Hoyer and EIB colleagues, strengthened in recent months through the appointment of Andrew McDowell as the first Irish Vice President in 12 years, the new EIB Dublin office opened by the Taoiseach in December and structured partnership through the Ireland-EIB Financing Group is already unlocking support for new investment.”

“I am confident that following today’s meeting, exploratory talks will take place with the EIB and the EIB will intensify its consideration of how to support projects crucial for Ireland’s future such as social housing, ports, community nursing homes, improvements to the national road network, Dublin Metro North in the years ahead” added Minister Noonan.

The second meeting of the Ireland-EIB Financing Group, chaired by Minister Noonan, discussed forthcoming capital infrastructure projects that could benefit from financial and technical support from the EIB, the expansion by EIB Group supports for lending to Irish companies particularly in those sectors that may be affected by Brexit, and options for the potential further use of Public-Private Partnerships or concessions to finance infrastructure where this may be appropriate.

“The EIB supports crucial investment across the country and has helped to attract financing from international investors for new schools, roads and healthcare. I am confident that continued close and excellent cooperation between Government Departments and agencies and the EIB will ultimately deliver rewards for all concerned. Earlier stage discussions on proposed projects in development will help ensure that good projects can be identified that will be eligible for EIB financing, subject to due diligence, approval of the EIB shareholders and agreement of Government.“ said Paschal Donohoe T.D., Minister for Public Expenditure and Reform.

New financing possibilities for smaller and more challenging projects under the EUR 315 billion Investment Plan for Europe, expected financing for Irish enterprise by the European Investment Fund and possible increased engagement to support investment in sectors most vulnerable to UK withdrawal from the European Union were also outlined.

Over the course of this year the EIB is able to offer around EUR 1 billion of new financing for projects across Ireland, including urban development, expanding port facilities, improving energy distribution, upgrading university facilities and construction of new social housing.

“Recent renewed efforts by Irish partners and EIB colleagues are ensuring that the EU Bank’s unique technical and financial experience from successfully supporting infrastructure and business investment across Europe and around the world can benefit Irish projects. This week’s meeting will ensure even closer cooperation to ensure that opportunities are not lost to unlock new investment that improves lives and opportunities in the years ahead.” said Andrew McDowell, European Investment Bank Vice President.

The Ireland-EIB Financing Group was established in December 2016, alongside the opening of the EIB’s first permanent presence in Ireland, to strengthen cooperation between the European Investment Bank and Irish government departments and stakeholders.

Over the last decade the EIB has provided more than EUR 6.8 billion for long-term investment across Ireland, including education, energy, transport, social housing healthcare, agriculture and water projects, as well as investment by small business and corporate research and development.

The Ireland-EIB Financing Group discussions followed the annual meeting of the Board of Governors of the European Investment Bank and ECOFIN gathering of finance ministers in Brussels.