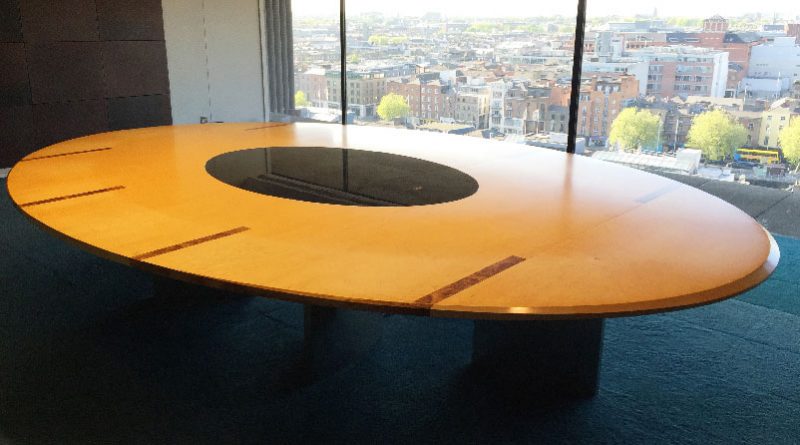 The entire contents from the former Central Bank buildings in Dame Street are to go under the hammer in one of the biggest sales in the history of the State.

Furniture specially designed by Central Bank architect Sam Stephenson will be among a massive range of almost 5,000 objects which took 25 articulated lorries to clear from the recently-vacated four-building complex.

Antiques and modern-day furniture expert Niall Mullen took the plunge to purchase the entire contents of the building after a tender process, and they will be auctioned in The Heritage Resort, Portarlington on Tuesday May 30.

“All of the boardroom furniture, desks, chairs and ancillary items were left on site along with all the catering and restaurant furniture,” said Niall

“The Bank went through all the procedures in order to maximise the return to the State of the contents, but there was no-one willing to take the good, the bad and the ugly in one lot.

“I was asked to tender for the contents of the Central Bank lock, stock and barrel. I did and my tender was accepted.

“After successfully selling the contents of both the Morrison and Berkeley Court hotels, I decided to take a chance on the Central Bank contents.

“After working solidly for 24 days to extract the contents, I am confident that this will be one of the most interesting modern-day sales that Ireland has seen.

“It has been the biggest logistical challenge of my life. We extracted around 5,000 items over the last four weeks, filling 20 40-foot containers.

“The auction will contain many of the original desks and tables from Sam Stephenson’s time, including many original pieces designed by the architect.

“There is also spectacular boardroom furniture from the 7th floor, made by top Irish furniture designers Klimmek, side tables, marble-topped sideboards and high-end executive chairs.

“We also have all the other furniture from throughout the building with desks and side tables in cherry, oak and maple as well as office chairs, computer monitors and keyboards, a fantastic array of potted plants and restaurant and kitchen contents.

“The Heritage is the only place that we could get that is big enough and near enough to Dublin to hold this auction, which will feature no reserves and will be a great occasion for public and trade alike.”

Niall is well-known as a furniture expert on the Late Late Show, and three restored seats from the Stella cinema in Rathmines which were featured on the show last week will be auctioned off at The Heritage in aid of St Michael’s House.

Viewing for the auction, held by Sean Eacrett Auctions, will take place from Friday to Monday.

The auction will be preceded by a unique sale of items from the basement of possibly the most famous five-star hotel in London, which takes place at the same venue on Saturday.