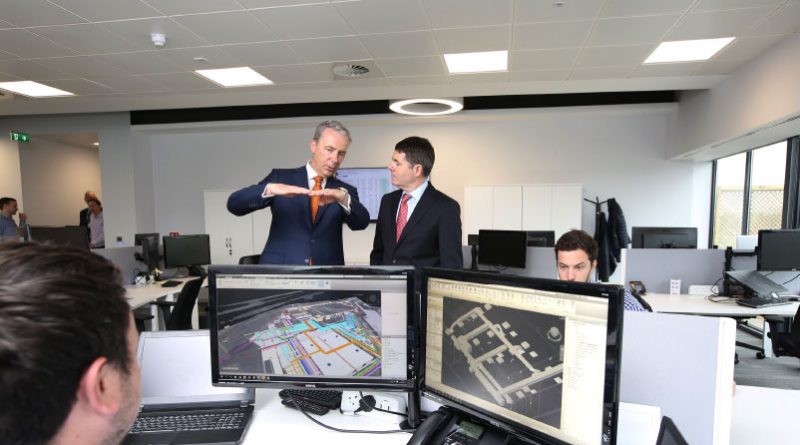 Paschal  Donohoe, TD, Minister for Public Expenditure and Reform officially opened the new €2m headquarter offices of Designer Group Limited in Blanchardstown on the 12th of May.

Designer Group was established in Ireland in 1992 and specialises in mechanical, electrical engineering and energy services for commercial and industrial customers.

The company has experienced considerable expansion over the past two years with employment growing from 400 to 650 in that time, and it plans to add a further 100 jobs in the coming year. The company employs 130 apprentices mainly drawn from the local area of Dublin 7 and Dublin 15, and has converted their old office into a specialist training and pre-fabrication centre.

Speaking at the opening, Minister Donohoe said: “Designer Group is a great Irish business success story and I am delighted to see this further expansion in Ireland as another strong symbol of our growing economy and increasing employment here in Dublin.  The Group’s local roots and international success are a testimony to the values and ambition of the organisation and its leadership. I wish them every success for the future.”

Also speaking at the opening, Chief Executive Officer of Designer Group, Michael Stone said: “It is important for us to create a modern and innovative environment for our staff, as well as employing the most up to date technologies for the benefit of our clients.  These new offices, which house the latest 3D and virtual technology facilities, will help to drive the company’s growth plans in the territories where we currently operate – Ireland, UK, Africa and the US.  We have very ambitious plans for expansion both here in Ireland and overseas and to enable us to fulfil these plans we will employ a further 100 staff in Ireland in the coming year.”

Managing Director (Ireland) Pat Gilroy added: “We recognise that in order to retain and attract the best talent we must provide an excellent working environment. In that regard, it is important to acknowledge the work of our architects RKD and our in-house project management team in delivering a top class facility.”

Designer Group, who have offices in Ireland, the UK and Germany and have recently been involved in projects for clients such as Yahoo, Dropbox and Irish Life and are currently working on Bristol Myers Squibb in Cruiserath, Kennedy Wilson and IPUT.