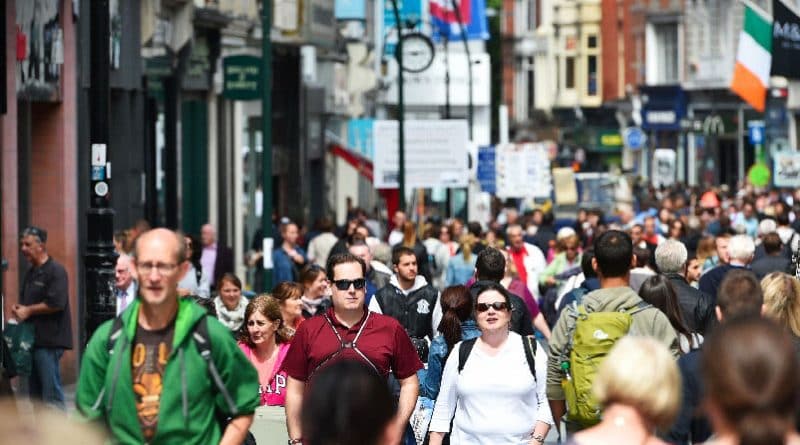 The new Census figures released by the CSO today show that investment in public infrastructure is now more important than ever, as our population continues to increase. Ireland’s population stood at 4.76 million in 2016 an increase of 3.8 per cent since 2011.

Ibec’s Director of Policy and Public Affairs, Fergal O’Brien stated: “Our growing population is putting additional pressure on the provision of public services. This affects our global quality of life ranking and our ability to compete for inward investment. It must be addressed urgently with a significant ramping up of investment from Government in public infrastructure.”

“The population of Dublin city and suburbs increased by 5.6 per cent, indicating a growing share of the population living in the capital. Our capital is in a global race for investment, so we need to ensure that it ranks high among the world’s most liveable cities. Government must invest in affordable housing, transport networks, and roads so that Dublin can compete globally as a top location in which to do businesses.”

“In contrast, the population of rural areas increased by just 2 per cent. The Western region in particular is ageing and putting pressure on key services and too many young people have left the region over the course of the recession.  In our submission on the National Planning Framework, we urge Government to address this growing inequality in Ireland’s economic recovery. If we want our regions to prosper and thrive in years to come, and for businesses to create quality jobs, now is the time for Government to invest in the infrastructure needs of the regions. We must ensure that future population growth is more evenly distributed across the country and that we halt the west to east population march which is again evident in the 2016 Census.”

Regarding the rental market the figures revealed that in total 497,111 households were renting on Census night last April, up 22,323 from the 2011 figure. Of these 309,728 were renting from a private landlord – an increase on the 2011 figure and a total that matches very closely with the 312,200 estimate previously highlighted by Savills.

Commenting on the rental figures Dr. John McCartney, Director of Research at Savills said: “These data corroborate our conclusion that, far from contracting, the private rented sector is expanding. The number of people living in rented accommodation is growing as is the number of rented properties. Ireland’s young demographic, along with  high house prices and tight mortgage lending,  have driven this demand for rented property. And with yields on residential property averaging 6.3% (compared with the average deposit rate of 1.08%) cash investors are more than happy to play the role of landlords”.

Despite the recent restriction of rental growth to 4% per annum in designated pressure zones, Savills says that high starting yields, the expectation of continued low interest rates,  and prospects of strong capital appreciation as house price inflation takes off again, mean that investors will remain active in the market.