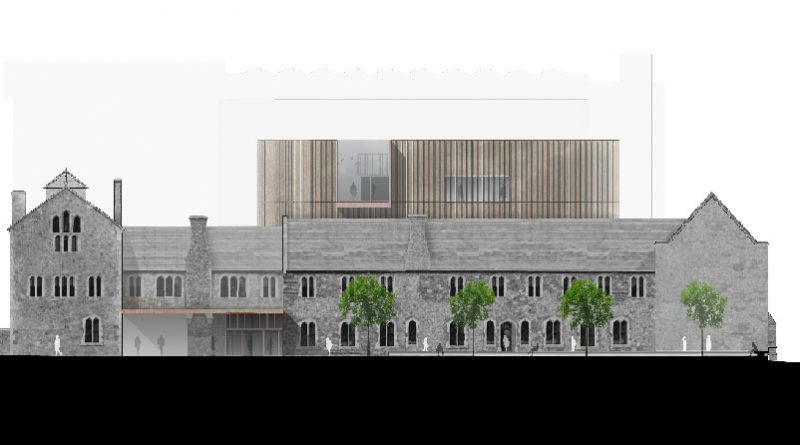 The EIB investment will support an ambitious €241 million development plan for UCC, which is the current holder of the Sunday Times University of the Year award.

With more than 500 new jobs likely to be created in the construction sector during the investment term, the impact for the Cork region will also be very significant.

UCC President Dr. Michael Murphy welcomed the delegation of European Investment Bank senior officials to UCC, announcing that the €100 EIB loan would fuel the most exciting phase of the University’s expansion to date.

“This is the largest investment in capital projects at UCC in our history. The scale and ambition of the infrastructural developments align directly to key focus areas for the future, namely enhancing student experience and building on our innovation and health agenda and facilities,” said UCC President Dr. Michael Murphy.

“We are investing significantly in student accommodation, student ICT services and a new student hub as well as developing the medical, dental, paediatrics research, clinical health, innovation and research facilities to continue to fuel progress and success in these areas. This investment by the EIB will have enormous impact not only for University College Cork, but for education and research nationally and internationally. The European Investment Bank funding is a real expression of confidence and support in UCC, its staff and students and will greatly assist the University in further improving its teaching and research facilities,” he added.

More than €60 million will be invested in student accommodation, with additional capital expenditure of several million on a new student hub and student services from ICT to UCC Campus facilities upgrades, extensions and refurbishments.

After student experience, Health and innovation projects will see the largest infrastructural developments such as the relocation of the Cork University Dental School, Research Centre and Hospital, a new Clinical Medical School in healthcare education and research for the Cork Hospitals and facilitate UCC investment with health partners in University Hospital Waterford, University Hospital Kerry General & South Tipperary General Hospital.

“The European Investment Bank is pleased to support the impressive transformation of UCC that builds on a strong track record of internationally renowned health and innovation research. This will transform education and student facilities for future generations and ensure Cork’s role as one of Ireland’s leading research centres for years to come, as well as creating jobs and training opportunities during construction,” said Andrew McDowell, European Investment Bank Vice President.

The current outdoor sports facilities at the ‘UCC Farm’ will be relocated to the adjacent site, to allow for the first phase of the Cork Science and Innovation Park to begin.

The total development programme is valued at €241 million, with EIB providing €100 million finance, and further funding through capital grants, borrowings and philanthropy.

In addition to the new €100 million UCC loan, the EIB also announced a €70 million loan for campus development at Trinity College Dublin earlier this week. The EIB has made record education lending in Ireland this year following €200 million backing for school investment agreed last month.

Over the last five years the EIB has provided more than €7 billion for investment in universities across Europe, including €512 million in Ireland. Ireland is the fifth largest country of operation for European Investment Bank support for universities.