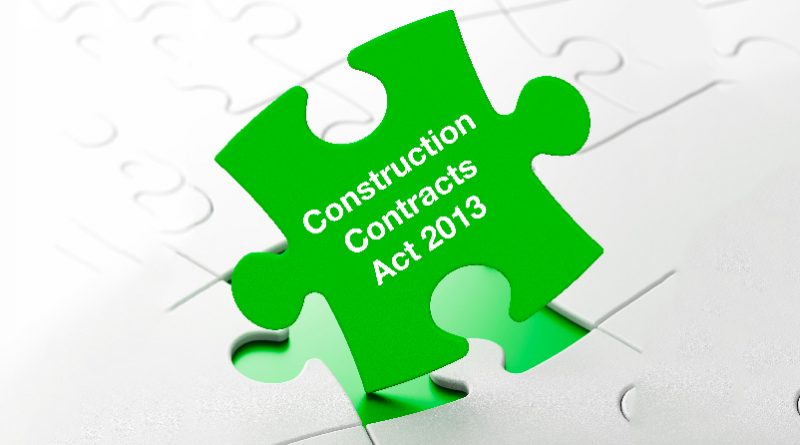 The Construction Contracts Act 2013 and changes to contracting as we know it?

It has been a long time coming but the final pieces now appear to be in place to give effect to Senator Feargal Quinn’s vision, initiated more than 6 years ago.

The journey to the Construction Contracts Act 2013 (the “CCA 2013”) has been a long one arduous, but recent developments have now put in place the final elements of the framework required to implement the CCA 2013. The CCA 2013 brings in changes aimed at improving certainty around the timing and amounts of payment to be made and provides for a new procedure for the efficient resolution of dispute relating to payment.

Mandatory payment provisions are introduced for all ‘construction contracts’, which includes appointments of construction professionals.  The CCA 2013 imposes a more prescriptive payment regime, particularly for sub-contractors and sub-consultants, for whom a maximum 30 day payment cycle will apply (except where the sub-contract terms are “more favourable”1). Parties claiming payment and those responding or certifying such claims must now ensure that the payment claims and responses contain core information and that timelines are complied with. But will this really change very much the way those working in the sector do business? Of course, the CCA 2013 outlaws pay when paid provisions and provides for a statutory entitlement to suspend works for non-payment. But pay when certified provisions remain up for grabs and contractual rights of suspension that have existed in many standard forms for some time are rarely invoked. Even so, the ethos of the CCA 2013 and the importance attached by placing these entitlements on a statutory footing cannot be underestimated. The safety net is now there! But questions remain: What happens if contracts are not CCA compliant? Or where a payment claim or a response are not issued in compliance with the CCA or are issued too late? These and many other questions arising from the CCA remain to be answered in due course, ultimately, through decisions which may be made by the Courts on the interpretation of the CCA 2013.

In support of the better payment practices is the introduction of a new dispute resolution procedure, namely adjudication, to which a ‘disputes relating to payment arising under a construction contract’ can be referred. A key feature of adjudication is that the resulting decision is binding on the parties, and must be complied with, unless and until it is finally resolved, whether through final dispute resolution procedures or by agreement. The procedure set out in the CCA 2013 broadly follows that of the United Kingdom and anticipates decisions being made quickly (and hopefully, cheaply) by the adjudicator, namely within 28 days of the notice of referral, or 42 days where the referring party agrees, although the parties can also agree a longer period. The experience in the UK, where adjudication, as a dispute resolution procedure, has been robustly supported by the courts, is that adjudication has been extremely successful, reducing the number of protracted disputes referred on to arbitration or the courts. The courts in the UK have upheld adjudication as providing ‘rough justice: a ‘quick’ answer, although not necessarily the ‘right’ answer. More often than not parties live with the adjudicator’s decision or use it as the basis for an agreed resolution. Parties to the process here, and ultimately, the Courts will have to decide whether this is what adjudication will mean for the Irish construction sector. Again, this remains an unknown that has yet to be played out.

On 15th January 2016, the Ministerial Panel of Adjudicators (the “Panel”) was formally published, with the appointments running from 8 December 2015. The Panel consists of experienced dispute resolvers from both Ireland and the United Kingdom and is chaired by Dr Nael Bunni, a renowned and respected figure in the world of dispute avoidance and resolution in construction and engineering (the “Chair”). There have been some murmurings of disquiet at the composition of the Panel, including the number of non-Irish members, the all-male make-up of the Panel and the timing of the appointment of the Chair, but its establishment was heralded as leading the way to the CCA 2013 finally coming into effect. Under the CCA 2013, following the issue of a notice of intention to refer a dispute to adjudication, the parties can seek to reach agreement on an adjudicator of their choice. Absent agreement within 5 days of the process being initiated, either party can apply to the Chair who will appoint an adjudicator from the Panel. Many of the industry bodies have responded to the establishment of the Panel by proposing their own panels2 in order to provide a broader choice of potential adjudicators for parties to reach agreement upon. Similarly, parties are giving consideration to the naming of potential adjudicators in their contracts to facilitate agreement. In all circumstances, however, in the absence of agreement following the issue of a notice of intention to refer a dispute to adjudication, the default position will remain for the appointment to be made by the Chair.

On 15th April 2016, the Act was brought into effect and now applies to all ‘construction contracts’ entered into after 25 July 2016. Parties have been incorporating changes to their contracts and appointments to give effect to and ensure compliance with the CCA 2013, and amended standard form contracts such as the RIAI Agreement and Schedule of Conditions of Building Contract and the GCCC forms of contract have been issued or are due for issue soon.

On 25th July 2016, the Code of Practice Governing the Conduct of Adjudications was published by the Department of Jobs, Enterprise and Innovation under section 9 of the CCA 2013 (the “Code of Practice”). This replaced an earlier iteration of the Code, issued on 5th July 2016, and provides further guidance to adjudicators (who are bound under the CCA 20133 to comply with the Code) and parties as to how an adjudication should be conducted. The Code guides parties as to the procedure and timing for the appointment of an adjudicator, and outlines for adjudicators the issues that they should consider before accepting an appointment, including whether they have the competence and time to deal with the dispute efficiently and in the manner the parties are “reasonably entitled to expect”.4 Adjudicators will also need to be satisfied that they have no conflict of interest. The question of whether an actual or potential conflict of interest exists is likely to be one of the more challenging areas for adjudicators and parties alike, and whilst the experience in the United Kingdom will no doubt be of assistance, the difference in the nature and size of the Irish construction industry may result in different conclusions.

The Code of Practice also outlines what the referring party should include in its notice of intention to refer and notice of referral, and provides exemplar directions which may be availed of by an adjudicator in running the adjudication, with a focus on ensuring this it is conducted in a fair and impartial manner. Given its speed, fair procedures lie at the heart of an effective adjudication, ensuring that principles of ‘natural justice’ and the entitlement of parties to a fair hearing, are strictly adhered to. The implication of constitutional rights into the adjudication process may also create some uniquely Irish idiosyncracies, which will no doubt be explored and developed by the Courts here.

Finally, on 12th August 2016, the Rules of the Superior Courts (Construction Contracts Act 2013) 2016 (the “Rules of Court”) were issued to deal with applications made under the CCA 2013 for leave of the Court to enforce or enter judgment in respect of an adjudicator’s decision. It is important that there be specific Rules of Court for applications to enforce adjudication decisions, to ensure that a quick decision is not thwarted by the time taken to enforce compliance with that decision.  Applications for enforcement will be by motion supported by affidavit evidence, with any replying affidavit to be issued within 7 days thereafter. These expedited timelines for the setting out of the parties’ respective positions are critical but will need also to be supported by the ability to secure a timely hearing date. The Rules of Court also helpfully set out the information to be included in an application on foot of an adjudicator’s decision and make clear that the role of the Court is to review and, where appropriate, uphold the process set out in the CCA 2013, rather than undertake any substantive review of the issues giving rise to the payment dispute.

The pieces are now in place and the industry can now implement the CCA 2013. Many question remain as to what, precisely, this will mean, both in terms of payment practices and in how adjudication may impact those practices and the dispute resolution landscape more generally.  We just have to wait and see!

1 Section 3(4).
2 The Chartered Institute of Arbitrators has established a panel and each of Engineer Ireland and the Society of Chartered Surveyors of Ireland are in the process of establishing their own panels. It is not clear yet whether and when the Royal Institute of Architects and Construction Industry Federation will follow suit.
3 Section 6(8).  The Code of Practice must also be complied with by adjudicators appointed by agreement and who are not on the Panel.
4 Paragraph 6, Code of Practice