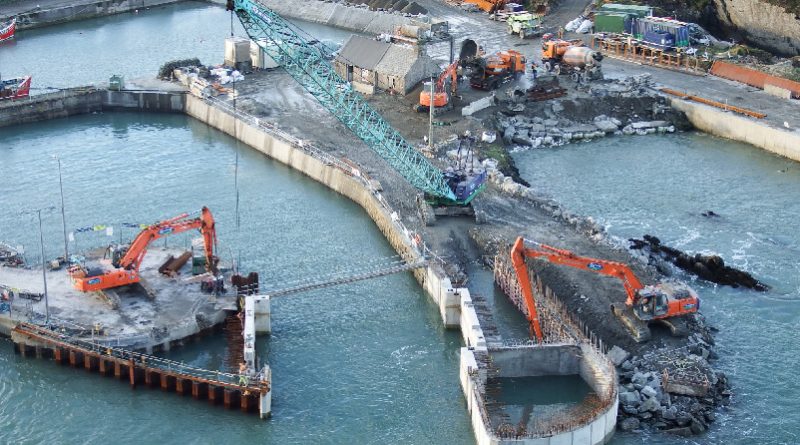 L&M Keating has been awarded the prestigious Civil Engineering Project of the Year award for their work on the design & construction of Cape Clear Island – Harbour Development & Storm Gates.

It was awarded recently at the Civil Engineering Contractors Association annual dinner held at the Double Tree, Ballsbridge by Hilton which was compèred by Síle Seoige. Minister of State for the Office of Public Works and Flood Relief Mr. Sean Canney TD was also in attendance.

The awards honour the passionate work of civil engineering contractors and professional across all aspects of the industry. They recognise the most exciting innovations, advances in safety and quality excellence over the period from 2011 to 2016. The Cape Clear Island project received the category award in the €2-5M euro value and the overall award.

This project, although small in value was one of the company’s most challenging marine projects to date, Cape Clear Island Storm Gates. For this project, L&M Keating offered a totally bespoke innovative contractor designed solution. The company chose to precast the largest element, the concrete lock chamber off-site on the mainland. The 15x15x9m high, 1000t concrete structure was cast and successfully floated from Verolme Drydock, Cobh over 130km to Cape Clear Island. It was then sunk into position on foundations 7m below water. The team then installed a set of sophisticated computer controlled mitre storm gates which includes two 30t gate leaves each operated by 140t hydraulic rams. This novel solution ensured that the harbour and vital link to the mainland remained accessible throughout the construction programme and improved safety by minimising underwater construction works.

Design & project coordination of the project was carried out by Project Director, Richard Browne. Richard who was selected as Chartered Engineer of the Year, 2015/6 said ‘This was a highly technical jigsaw which took the efforts of our crews and over 14 separate design specialists to put it together. The largest component of which had to arrive in a 2hr slot at the right stage of the right tide with the right weather conditions’.

Accepting the award, Louis Keating said ‘We are overjoyed with the win. We have been in the business for 30 years and now have over 100 of the best people delivering some of the most innovative, technically challenging building and marine projects in the country. This project had it all, technical challenges, off shore logistics and cutting edge design. It’s humbling to have our project voted best in the country by such an esteemed panel of judges.’

The project has proved to be a great success and today provides protection to the critical harbour infrastructure and safety to the islanders fishing boats and passenger ferry. L&M Keating, Building & Civil Engineering Contractors have developed a name for delivering the most technically challenging marine civil engineering projects, particularly in the design and build sector. L&M Keating are currently working on a number of marine projects such as Rossaveel Harbour and Dublin Port Redevelopment.