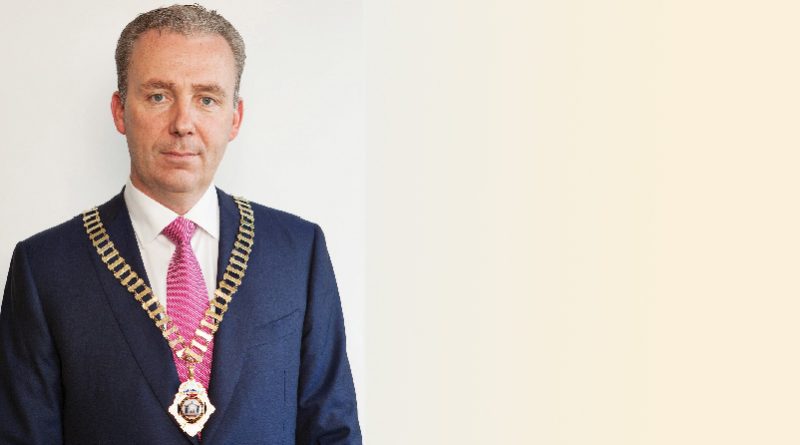 For the past 20 months, Michael Stone has fulfilled the role of CIF President. He has been at the forefront in making the Construction Contracts Act a reality for the industry and has also been a champion for apprentices since taking up the role.

Following his election as CIF President, Michael Stone set out an ambitious plan for the development of the CIF over the next two years. “I have been a member of the CIF for the past 16 years and I am acutely aware of the honour it is to be selected and to serve as President of this organisation – one of the most important representative bodies in the country,” he said.  “I am also very conscious that the role brings with it a huge amount of responsibility and challenges.” Michael was well placed to take up the role of CIF President. He has served as President of the Electrical Contractors Association, ECA and the Mechanical Engineering & Building Services Contractors Association, MEBSCA and has participated in most of the Federation’s sub committees over the years.

One of the ambitions set out from the start concerned the Construction Contracts Act which recently came into effect. It has taken a long while to become a reality but the Construction Contracts Act is an extremely positive step for our industry. The Act provides, subject to some exceptions, new minimum contractual provisions in relation to payment arrangements between the parties to a construction contract. Where payment disputes arise between parties, either party will have the right to refer the payment dispute for adjudication which will be concluded within a set timeframe. If the parties cannot agree on an adjudicator, the Chairperson of the Ministerial Panel of Adjudicators will appoint an adjudicator from that Panel to the dispute. “This Act will benefit the entire supply chain by bringing more certainty to contracts and dispute resolution in the industry. The sector is in recovery mode and this Act will help companies plan, budget and invest more accurately in meeting Ireland’s increasing economic demands,” says Michael.

The challenge now, says Michael, is ensuring the Act is understood. “Our Federation is providing training courses to ensure all companies around the country, big and small, understand how it works. Legislation such as this is effective only when companies and people understand how to use it. Essentially, if you are conducting your business properly and someone decides not to pay you, this Act is going to help you. That may be simplifying it but that is how it will work. It is a great step forward for the industry, we are very proud that it has finally become a reality.”

Another aim set out from the start related to apprentices and the lack of apprenticeships in the industry. There is no doubt that numbers are on the rise but much more needs to be done. “At the moment, we are looking at various short-term training programmes to get people available to construction companies to the marketplace much quicker and ensure they are ready for work.” The CIF is also finalising plans for pilot training programmes for steel fixers and dry liners. “These are 16-20 week programmes that get people to the marketplace much quicker. We feel that this will help the industry considerably as there is a lot of this type of work coming up. The Federation met with the main contractors to establish what type of training they felt was required. We then went to Government, Solas and the ETBs and they have all been very supportive of the initiative. It is progressing well and we believe these training programmes will be very successful.”

The above issues tie into the overall perception of the industry, which says Michael, still needs to improve. We have certainly made progress but the actions we have taken in the past few years will take time to deliver. Michael says the Federation is delighted with the appointment of Simon Coveney as Minister for Housing, Planning and Local Government and sees it as a big boost for the industry. “We need to be going to Government with solutions rather than just looking for more investment in the sector. We need to be presenting innovative ideas for the housing situation and ways to develop the infrastructure in the country.”

Trying to get young people to consider the construction industry as a viable, attractive career choice is another challenge Michael is tackling. “In order to achieve that, we need to look at more long term plans to take out this cyclical boom bust scenario that the industry has always been faced with.” The CIF is trying to persuade Government to look at this and take a long term view on construction, similar to the 10 year plans adopted in the UK. “While there is no doubt that it was a good initiative, Construction 2020 is too vague. There are not enough specifics that can be benchmarked. We, as an industry, need more definitive plans and a strategy to ensure the entire country recovers from the recession, not just the capital.”

Improvements in the industry, such as the Building Control (Amendment) Regulations and CIRI (Construction Industry Register Ireland) have all contributed to a more positive perception of the sector. “If you raise standards and improve delivery, clients and the general public will change their attitude towards our industry. A career in construction needs to be seen as a profession rather than something you do when you cannot get into college.”

There may be light at the end of the tunnel in relation to the ongoing housing crisis in the shape of Simon Coveney but it is a very complicated issue says Michael, and not one that will be quickly solved. “Undoubtedly it will be a key topic for the Government for at least the next three years until people start seeing progress on the ground but I believe we have the right man in the job. Costs have to come down and Government needs to play its part in that by reducing their tax take and providing finance for builders to build units. As an industry we need to look at our costs and ask how we can do things cheaper and more efficiently.”

No company will build unless there is a margin there for them, says Michael. “When you look at house prices and the cost of the site, the building costs and the tax take from Government, then in many cases the figures do not add up. Our budget proposal was to take the VAT down to 9%. We need to adjust costs including VAT and levies, but I would not be an advocate for reducing standards. It is a challenge but one we are well up to facing.” Michael’s aim as CIF President is to promote higher standards and maintain the country as an attractive location for FDI companies. “It is the FDI companies that kept the construction industry going in this country over the last eight years. We need to be innovative and demonstrate leadership so as to ensure that companies in the construction sector have a dynamic workforce with the skillset that these FDI firms require; investing in competencies such as BIM modelling and Lean Construction are key to this.”