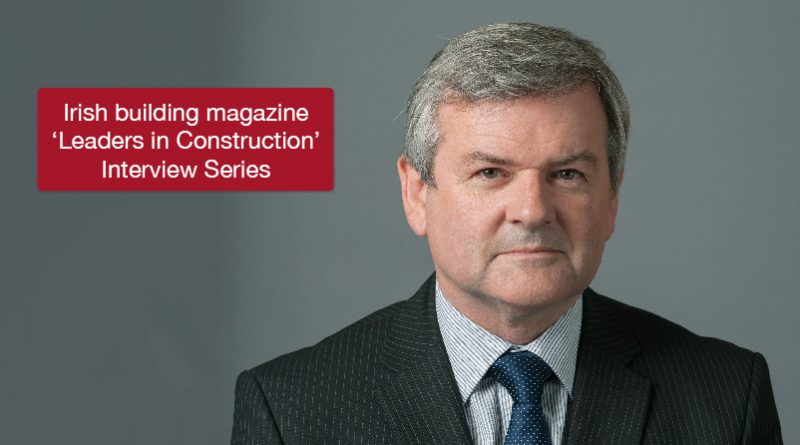 Heading up one of the country’s most innovative and successful engineering companies is no mean feat, but its daily challenges provide a rich landscape for Jim Curley and the team at Jones Engineering Group.

The Irish Construction Industry is in a better place today compared to where it was during the Tiger years”. Jim Curley, CEO of Jones Engineering Group, recognises what has contributed to the current climate in the industry. “Innovation in the form of LEAN, BIM, etc, has come into our sector like never before. Public work contracts have become fairer. The Construction Contracts Act will bring some order to payments. Competition might be stiffer but the playing field is becoming more level. Young people are starting to be attracted again into our industry and onto construction courses at third level”. All of these positives, he says, come with a cautionary enthusiasm. “Provided we err on the side of caution, the Government starts addressing the housing and infrastructure issues and the rest of the world does not implode economically we might, for the first time in some years, be able to look forward to some sustainable reasonable levels of growth at home and abroad.”

With a turnover in excess in of €360m in 2015 (up €50m on 2014) and further growth forecast for 2016, Jones Engineering continues along the strategic path of planned sustainable growth.  In 2015 the firm expanded its operations to over eight countries. The origins of the Group (H A O’Neil Ltd) can be traced back to 1890 when a young Irish man called Harry Austin O’Neil returned home from the USA where he had trained as a plumber. “If Harry was alive today he would not recognise the firm he founded. He would however recognise the principles and core values of the firm as they have changed little from the ones he espoused over 100 years ago,” says Curley.  A book celebrating the journey of Jones Engineering across three centuries was recently published and will be launched in the autumn of this year.

The last year has seen a plethora of awards bestowed upon Jones Engineering Group, and the performance of its teams has been recognised for delivering the most complex projects safely, on time and to the highest standard.  Just some of the accolades include NISO/NISG Occupational Safety Awards-Distinction Award (2015), Irish Building & Design Awards-BIM Initiative of the Year Winner (2015) and Irish Construction Awards- Innovation in Construction Winner (2015). Jones Engineering Group was also the winner of the 2016 Irish Building & Design award for “Mechanical & Electrical Contractor” of the year.

“For a firm like ours, a large element of repeat business is part of the formula,” explains Curley. “Over 70% of the business is repeat. Multinationals, both here and overseas, being a large element of this work.” In addition to the traditional sectors Jones has also experienced growth in its waste to energy division. Jones Celtic BioEnergy Ltd, which is now seen as the go-to firm in the Anaerobic Digester space both here and in the UK having completed the design and construction of the largest anaerobic digester in Europe and until quite recently the largest in the world. During the last 12 months the ownership of the Group has increased to include Shane Gillece, Group Director Mechanical, Stephen McCabe, Group Director Electrical and John King, Group Director and Chief Financial Officer, Eric Kinsella as Executive Chairman and Jim Curley as CEO.

“Working with the multinationals has allowed us to build on our experience, become world-class and given the group and the team the confidence to sell and deliver these services overseas”. The target, according to Jim Curley, is to have a 50/50 split between the local and international market. “There is a good pipe line of work,” asserts Curley. “However, there are many factors out there that are outside all our control that can affect the delicate balance between growth and recession both domestically and internationally. “These potential game changers include the real state of the Chinese economy, oil prices, stock market prices, currency fluctuations and most important of all whether or not the UK stays in the EU. “In addition to these items we have issues here at home and abroad in the area of power and water that have the potential to become real limiting factors for growth,” cautions the CEO.

What would Jones Engineering Group like to see from the incoming government?  “The Government needs to attract ordinary investors back to the residential property market,” states Curley. “Ordinary people have used these in the past as an attempt to hedge their pensions. Report after report (Grant Thornton 2009, Housing Agency 2011) has shown that from a Government funding perspective the option of leasing dwellings from private sector owners is the most cost effective option when compared to State capital funding.”

With so many Government Departments overlapping with construction, serious consideration must be given to the appointment of a Minister for Construction or as a minimum a Construction Czar with the mandate to get waste including duplication and red tape out of the system.

The planned expenditure in infra structure must proceed and increase in order to support future expansion in the private sector.

In a decidedly uncertain market, what makes Jones Engineering stand out as a leader in construction? It’s all down to family, says Jim Curley. “Jones Engineering might be a large operation but those who work there will tell you that it has the feel of a family firm. There has really been only three owners over the years . Three keepers of the keys! From 1890 to the mid 1940’s Harry O’Neil. From the mid 1940’s to the early 1990’s Chris Jones followed by Eric Kinsella and his Team. In recent times Eric has taken on the role of Executive Chairman and the fourth generation of owners are preparing to take the Group into the future.“

Curley cites the company’s determination to identify and hire smart, driven staff and provide the best training and opportunities for them to progress, as one of its greatest hallmarks. “Our HR Team, headed up for many years by Sandra Guilfoyle, has largely succeeded at this,” he explains. “We were the first contractor to have its graduate training programmes recognised by Engineers Ireland as a route to Chartered status. We are the only firm in the world to have won the world skills competitions twice in plumbing. Our ongoing commitment to training continues. An example of this is our Chairman who recently put in place scholarships for suitably qualified students to study Engineering at Trinity College Dublin.”

Jim Curley says that the company has embraced innovation and technological change since its inception.  “Innovation has been a by word here at Jones from the earliest days. It is said that Harry O’Neil invented the compression fitting but failed to patient it! The firm was one of the first if not the first to use pvc pipe and fittings. This goes back to the 1940’s. X ray welding going back to the 50’s. It is no surprise therefore that Jones Engineering have been applying LEAN principles for many years and recognising the benefits it brings to the firm and the potential for the industry in general if all firms including Clients were to buy into it. Jones Engineering Group along with Intel Ireland together with, SCEG, PhathomHQ and Construction Innovation Lab, launched the first Lean Construction Institute (LCI) Community of Practice (CoP) here in Ireland.”

The firm has put hundreds of people from across the organisation through LEAN programmes . It has invested heavily in external training in LEAN up to and including Masters level and has instigated a “better way programme”. The company publishes an internal magazine on LEAN and pushes it across the firm to such an extent that it has touched every part of our organisation. This commitment to embracing change has resulted in the firm becoming widely known as a leader in LEAN.

As part of our LEAN journey we have embraced BIM. Like LEAN, as evidenced by Award after Award for our BIM Team, we are one of the leaders in utilising and developing this new tool. “Safety and the welfare of our Team, the people who work with us and those who use the installations after us continue to be a priority for all of us here at Jones,” states Jim Curley.  “We were particularly pleased to see that our efforts in this regards were recognised by our peers during the last 12 months.”

The future looks bright for this dynamic leader of construction. Jones Engineering proves that by adhering to the core principles of business, and consistently challenging the environment in which you operate and with a little bit of luck thrown in, success is almost inevitable.