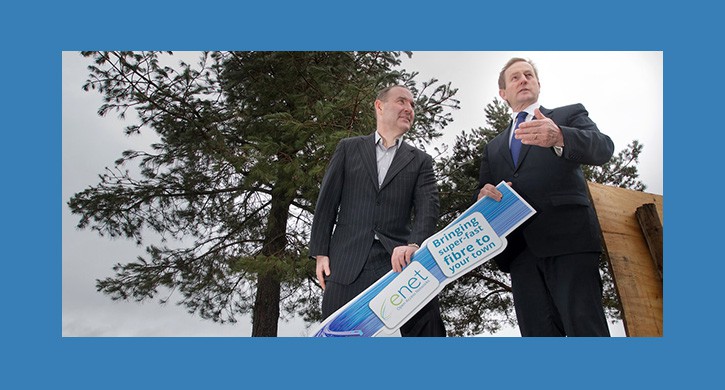 An Taoiseach, Enda Kenny T.D. has launched a new world class metro fibre network in Castlebar, Co. Mayo, built by enet, Ireland’s largest open access network operator. This new network is the result of a €1.5M private investment by the company as part of its ongoing network expansion.

This investment has funded the deployment of a metro fibre ring in the town which is connected to all major commercial and industrial zones as well as, in conjunction with the county council, to several additional land banks where future developments are planned.

This fibre network has future-proofed Castlebar’s business community by providing the ultimate unlimited broadband experience, free from bandwidth bottlenecks, and is allowing local businesses to take full advantage of digital markets and exploit online opportunities. Crucially, this infrastructure is a genuine 100% fibre service, guaranteeing business owners the broadband speeds which they have signed up for, as opposed to the ‘up to’ claims made by service providers over copper networks. This infrastructure is now available to all businesses in the town to experience the benefits of real fibre broadband on a truly open access basis.

This announcement quickly follows enet’s recent launch of a 1Gbps fibre broadband network in rural North Kerry to showcase its capability to deliver the National Broadband Plan programme. Costing €650,000 and delivering fibre-broadband connections directly into approximately 340 premises in the locality, it is enabling local homes and businesses in Kerry to enjoy genuinely world class broadband services.

An Taoiseach, Enda Kenny commented: “High speed broadband infrastructure projects like this new broadband Metro fibre network are crucial for economic development and quality of life. They support both local business development and foreign direct investment projects. Last May I attended the announcement of this €1.5million project as installation of the fibre commenced and following the recent completion, I welcome enet’s commitment to the provision of high speed broadband. The Government is determined to eliminate the digital divide between rural and urban areas by delivering high speed broadband to 85% of premises by 2018 and 100% to all non-commercial rural areas by 2020.”

Conal Henry, enet CEO said: “enet is delighted to bring this future-proofed technology to Castlebar town. As with the 94 Metropolitan Area Networks (MANs) which we operate on behalf of the State, this privately-funded fibre ring is creating further opportunities for the businesses of Castlebar, and putting an end to the limitations created by the single supplier monopoly which had previously existed in the town.”

Mr. Henry went on to say: “Importantly, this network is operated in an open access fashion, meaning that all service providers have access to it – allowing for competition in a way that had not previously happened in Castlebar. Our experience has shown that the existence of open access fibre has a major impact on boosting the range, quality and value of communications solutions for businesses in the area. This kind of open access network model will also be crucial to the success of the National Broadband Plan – otherwise we risk re-creating the telecoms ransom strips of old.”

In a separate initiative, the company, currently a finalist in the 2016 European Business Awards for Business of the Year, is also currently developing a number of enet “fibredirect” towns across Ireland, with Claremorris having been the first town in Ireland to benefit. To date enet’s “Fibre to the Business” towns include Claremorris, Loughrea, Ardee and Kilkenny city, with up to 20 more towns planned. The fibredirect infrastructure delivers fibre optic cables directly into SME premises, allowing them to access broadband speeds of up to 1 GB.