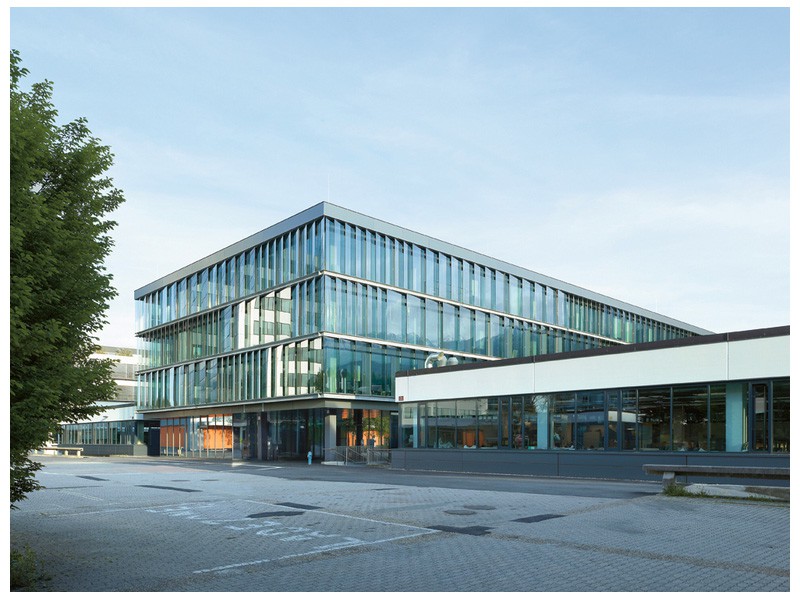 A completely modernised university building in Innsbruck, Austria demonstrates the energy saving potential available with refurbishments. Through integrated planning, the heating demand of the building was reduced from 180 kWh/m²a to just 21 kWh/m²a. The project thus meets the criteria of the EnerPHit Standard for retrofits with Passive House components.

The certificate was presented at the official reopening last Friday. The wider public will have the opportunity to visit the building during the International Passive House Days from 13 to 15 November.

The building, used by the Faculty of Technical Sciences, was originally built in 1968. As an extensive renovation was necessary anyway, it was decided to improve the energy efficiency at the same time, with moderate additional expenditure. In close cooperation with the Passive House Institute, the planners developed an overall concept, which turned the eight-storey building into an exemplary project – it is currently the world’s largest building to be certified to the EnerPHit Standard.

The reinforced concrete structure consisting of ceilings and supports was retained, but the building envelope and building services were completely overhauled. In addition to a great increase in energy efficiency, this also led to substantially improved occupant comfort. Among other things, this was due to automatically controlled passive cooling at night via windows in summer, the supply of fresh air directly into the office areas through adequately dimensioned transferred air openings, and a good level of thermal protection of the façade. The efficiency of electrical equipment was also increased.

The EnerPHit Standard, introduced by the Passive House Institute, is specially tailored to the particularities of retrofit projects; depending on the initial situation, the solutions developed for new Passive House constructions cannot always be applied on a one-to-one basis. Still, the principles of the Passive House Standard are economically expedient even in the case of refurbishments, above all the consistent use of Passive House components.

The EnerPHit Standard is a guideline for effective and cost-effective refurbishments. Besides energy efficiency, the aspects of healthy living, building preservation and lifecycle costs are also taken into account. The overarching objective is quality assurance; with EnerPHit certification, building owners can be sure that an optimal standard of thermal protection is actually ensured. This is particularly important because subsequent correction of inadequate thermal protection measures is almost always uneconomical.

“The basic principle which should be applied for each structural intervention in an existing building is ‘if it has to be done, it should be done properly’,” says Dr Wolfgang Feist, who presented the EnerPHit certificate on 23 October in his capacity as the Director of the Passive House Institute. As the University professor in charge of the energy-efficient construction division, the building physicist also has an office in the newly refurbished building. “It is getting increasingly colder outside now into autumn but inside the building it remains pleasantly warm, without the need for using the radiators,” says Feist. “The building already passed the heat test this past summer. When the temperature in Innsbruck was a record-breaking 37°C, even without air conditioning it remained cool enough to work in the office, thanks to the passive technology. A huge improvement compared with the previous situation.”

Calculation with the design tool PHPP (Passive House Planning Package) which is necessary for EnerPHit certification provides reliable energy values for a building. Due to the individual features of refurbishment projects, the energy-relevant criteria apply for individual building components. Exceeding the respective limit values is permissible if the building has a maximum heating demand of 25 kWh/(m²a) despite this.

The EnerPHit project in Innsbruck can be visited within the framework of the International Passive House Days on 13 November from 9 a.m. until 5 p.m. Dr. Rainer Pfluger of the University Institute for Energy-Efficient Construction and Harald Konrad Malzer of the Passive House Institute will offer guided tours during this time. An overview of the several hundred Passive House buildings which can be visited on this weekend not only in Austria, but in many countries worldwide, can be found on the website: www.passivehouse-database.org