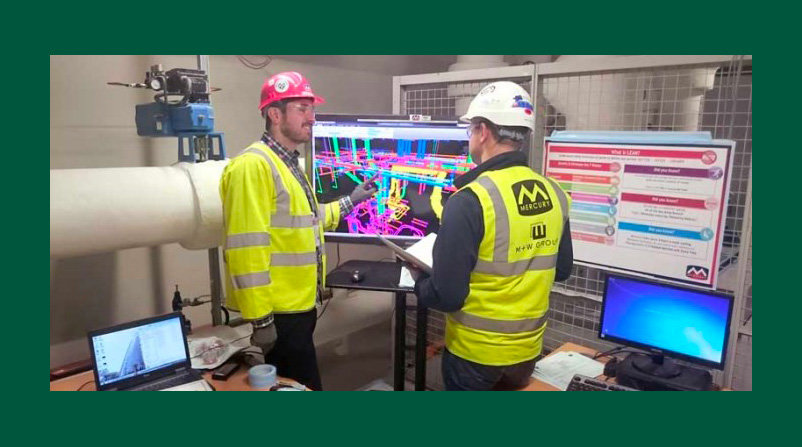 A programme of lean and BIM principles at Mercury Engineering has improved efficiency and resulted in continuous improvement at the company.

Continually reviewing operations and processes with a view to achieving improvement has become embedded within Mercury Engineering’s company ethos. The employment of lean principles and the utilisation of BIM have resulted in improvements when it comes to financial returns and employee satisfaction. “We implemented BIM in 2011 and there were a couple of reasons for taking up the technology. One was that tenders documents began to stipulate the clients’ requirement for utilising the process. Once we started using it we very quickly recognised the productivity gains we could achieve using BIM,” says Ciaran McCreary, BIM Manager at Mercury. “A major plus to the firm was the ability to develop BIM models engineering in our prefabrication package philosophy. BIM gives us the ability to fabricate components of the building off-site and ship them to site for install. It also gives us superior visibility over material procurement and logistics and in particular where wastage was occurring, we have achieved this by integration with our ERP systems. In relation to sequencing and programming problems, we could now pre-empt these in an animated visual manor whereas prior to using BIM we were reliant on spreadsheet type data. The data rich nature of what we were modelling was extremely beneficial, establishing linkages to Mercury’s existing systems and knitting project data together.”

BIM may not solve every problem that has a cost impact, but experience has shown that improving information quality and increasing unity through collaboration can make projects more predictable, thus decreasing the cost and time of a project. “We certainly find that BIM helps in keeping costs down. It also gives us a centralised data pool that the project grows from.” Although officially taken up in 2011, Ciaran says the firm would have attempted BIM type activity prior to mandating it across all projects. “At that stage data was essentially unstructured or unfocused. We didn’t have all players in the building construction process on board or project specific BIM execution plans in place.” By embracing BIM early, Mercury is several steps ahead of its competitors. “We saw very early on the productivity gains that could be earned by utilising BIM. We also recognised that it would make us more competitive so we feel that by adopting it that bit earlier, we’re now ahead of the curve having in-house expertise in BIM developing bespoke solutions to meet clients’ requirements”.

All Mercury projects, at home and across Europe, have a BIM mandate. “We have just completed the BIM model development of a processing plant in Holland using in-house resources to carry out detailed 3D point cloud scans then 3D BIM model development and full fabrication deliverables here in Ireland. We produced the fabrication deliverables in Mercury Poland and then shipped to Holland for install by the Irish Mercury team.” Depending on project requirements, BIM crews can be located in Europe to execute the BIM element of the project directly on site. “We have a core BIM group of 28 located in Ireland, with further BIM teams in Europe and the UK.”

Ciaran has worked with Mercury for the past 14 years. “My own background is in process pipe and design. I would have experienced and seen the development of BIM within the sector, through seeing 3D modelling technology used for process plants design make its way into other sectors of the construction industry. Costs for these systems were high and it’s important to mention that the toolset now available for BIM is much more affordable. In the past you would only have considered utilising BIM for very large-scale process plant type projects due to cost constraints. Now, it’s much more achievable and affordable on smaller scale projects. If you take advantage of suites of products, they now have subscription and lease options available. These options allow firms to use BIM without having to fork out tens of thousands of Euro to buy the software outright.”

Changing mindsets and educating people about the benefits of embracing BIM is part of the process says Ciaran. “The upskilling of trades who would generally be of a traditional nature can be time consuming. There’s a learning curve for them to get up to speed but once a crew is over that hurdle, it very quickly becomes the norm. We have examples of projects we worked on where BIM wasn’t actually mandated by the client. The other participants within the project were working on a 2D basis so we took his 2D design and built a ghost skeleton frame to represent his element, validating it by means of 3D point cloud scanning so we could identify potential interference. By modelling and validating their content upfront, we eliminated any potential problems and delivered a ‘right first time’ installation package”.

With the likes of CITA and some pro-active construction companies keen to promote the benefits of BIM to the industry at large, it’s clear that the future of construction is BIM driven. So why are some firms still so reluctant to embrace the technology? “I think everyone sees the benefits. There are definitely firms out there dragging their heels a bit. They see it as a large investment but if they actually investigated the options out there, they would see it’s actually very achievable.”

Ciaran and the rest of the BIM team at Mercury have big plans going forward. “The current plan is to centralise our BIM operation. We’re currently in the construction of a BIM hub at our fabrication facility. We want to stay ahead of the curve in relation to BIM adoption. We’re adept in developing bespoke productivity solutions for BIM model development and that’s also something we’re keen to grow.”

Alongside BIM, Mercury has long been an advocate of lean and has been implementing lean principles into work practices for some time. “We believe that lean has always been something we strive for. Our position on lean is if there’s an activity or a task that we’re going to perform for our client, we’re always trying to do it better, faster or smarter. Previously we may have referred to it as performance improvement or continuous improvement, but it’s always been there since our founding in 1972,” says Gary Widger, Head of Innovation & Change at Mercury.

In the 1990s, there was a big drive in construction for safety improvements. In the 00s it was quality and now, its productivity. Lean is, says Gary, one common language that’s being used across the sector. “What’s happened now in our industry is that all stakeholders, clients, builders and contractors are simultaneously focused on the same challenge and are using the same language and similar metrics to reduce waste.

Implementing a lean ideology has ensured all staff members are on the same page. “We have a LEAN programme at Mercury called ‘Leaders in LEAN’ ; once a week a great idea from a construction site is shared across all our staff which comprises of 1,000 people spread out over 10 countries. If someone has an idea that will make a task better faster or smarter, then we want to share it. Projects by their nature are very busy, people don’t always have the time to step back and find out if another project in another country from Mercury facing the same challenge. Lean is a stepping stone towards standardisation. By finding and sharing our Best Known Methods (BKM’s) we are raising the bar across our projects.”

Approximately 300 people have been trained to date to either yellow or green belt level. “We’ve qualified over 20 green belts this year alone who are our LEAN Leaders.  They qualified by delivering value adding LEAN projects that are accredited by the Institute of Technology, University of Ontario thus providing Mercury with a premium, international LEAN certification which is vital in our business. ”The next step is our black belt programme that will drive standardisation of lean practices or best known methods (BKM’s) across all Mercury sites.” Gary and his team are also exploring lean back office. “We want to ensure that lean principles are absorbed into our head office operations which is why we have Green Belts in key management positions in both HR and Procurement.”

Gary says one of the most important learnings from LEAN is the fifth principle which is ‘pursue perfection’. “If you make good strides on lean there’s always the next step. The job is never done that’s why we continue to raise the bar in Mercury. In our industry companies who stand still will soon be overtaken. Our goal is to be leaders in LEAN.”