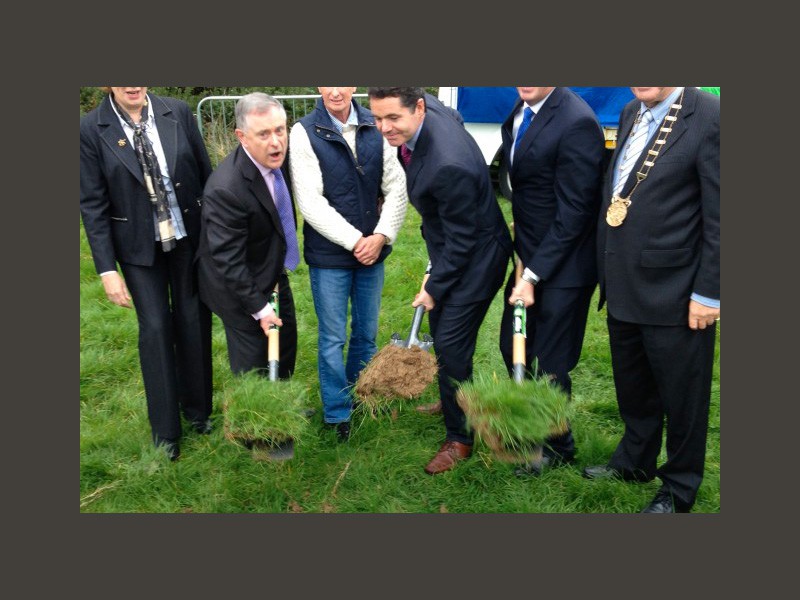 Minister for Transport, Tourism and Sport, Paschal Donohoe TD, together with Minister for Public Expenditure and Reform, Brendan Howlin TD, has turned the sod on the new M11 Gorey to Enniscorthy PPP scheme.

The scheme to be built by a consortium led by BAM and Spanish infrastructure group Iridium was initiated under the Government’s Infrastructural Stimulus Programme and will be developed over 3 years. The project is scheduled for completion in 2019. The scheme is being implemented under the Capital Plan. The €400 million scheme will involve the construction of 39 km of new national roads and will employ between 250-300 people during the construction phase of the scheme.

The M11 Gorey to Enniscorthy scheme is the third transport PPP to be signed by the Government since 2012 and follows the €550m Gort/Tuam PPP project, which commenced construction in 2014 and is on target for completion in 2018. The final phase of the N7/N11 Arklow to Rathnew PPP scheme opened to traffic in July 2015.

Speaking this afternoon, Minister Donohoe said: ‘This is the second road PPP event I have attended this year and it is the third transport PPP signed by this Government since coming into office.  The M11 PPP scheme will bring important economic benefits to the south east both regionally and locally.  It will improve connectivity, reduce traffic congestion and increase the attractiveness of bypassed communities as places to shop, to visit, to work and to live. I am also very pleased to say that between 250 and 300 jobs will be provided during the construction phase of the scheme, bringing welcome employment to the area as the scheme is progressed. The construction of the M11 is included in the Government’s Capital Plan, which for transport runs from 2016-2022 and which was recently announced. Funding is also being provided, in part, by the European Investment Bank, which recognises this scheme as a key infrastructure project that will have many benefits for the region’.

Minister for Public Expenditure and Reform Brendan Howlin said: ‘I am delighted to be here today at this official sod turning ceremony for the M11 Gorey to Enniscorthy PPP scheme. The M11 is a very significant project for Wexford and the South East of Ireland and represents yet another significant step in the upgrading of this strategic link in our national road network. In addition to creating jobs during construction, this new motorway will connect communities, improve accessibility to Rosslare Europort, reduce travel time and will improve safety on the route’.

Michael Nolan CEO, Transport Infrastructure Ireland stated: ‘Today’s event marks a major step in providing one of the most significant sections of motorway along the M11 corridor. This scheme will not only improve safety, but will provide enhanced economic connectivity for the entire region’.

Jonathan Taylor, EIB Vice President responsible for Ireland said: ‘Upgrading the M11 is a key infrastructure scheme that will remove a well-known traffic bottleneck, reducing congestion and improving journey times in the south-east of Ireland. The European Investment Bank is pleased to continue our support for transport investment in Ireland in co-operation with Transport Infrastructure Ireland, Irish and international investors. Improving the long-awaited M11 will benefit the people of Enniscorthy and support thousands of jobs across the country’.

Cathaoirleach of Wexford County Council Councillor Tony Dempsey acknowledged the co-operation of the many landowners along the proposed route of the scheme. He said: ‘The investment here in the Enniscorthy Bypass coupled with the bypass of New Ross is a real vote of confidence in Wexford and I would like to congratulate everyone who is involved in such a worthwhile initiative’.

The project will be undertaken by a BAM Civil and Dragados joint venture.   The new road will be operational in August 2019, followed by a 25 year concession period for the consortium.

“We are pleased to have brought finance to and concluded the agreement in relation to this significant piece of motorway infrastructure and look forward to commencing construction.  Following the recent opening of the Arklow to Rathnew portion of the M11, this new motorway will further enhance transport links to the South East.  PPP is a highly effective model for investing and developing Ireland’s infrastructure, which plays a critical role in our economic recovery,” said Theo Cullinane, BAM Ireland Chief Executive.

Minister Donohoe concluded: ‘I wish to thank Transport Infrastructure Ireland, the EIB, international investors and Wexford County Council for their hard work to get this scheme over the line and make this exciting project a reality. I wish the BAM Civil Ltd. and Dragados Ireland Ltd. joint venture every good wish during the construction phase’.