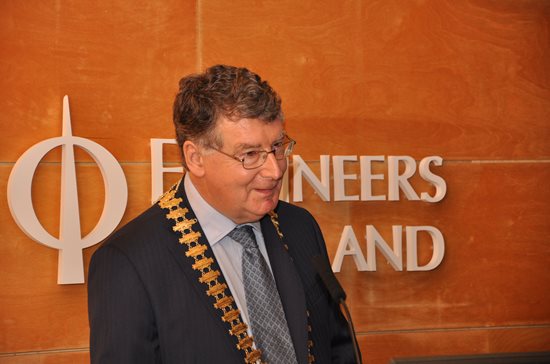 Engineers Ireland president Bill Grimson stated in his presidential address that we all need to change our way of thinking when it comes to many of the great engineering challenges of life such as deciding upon alternative sources of renewable energy.

“We can’t do nothing. When somebody says ‘we don’t want wind power’, fine, well how do you want your energy?” the president told the 100-strong audience.

We have to change our mindset, from one that merely ‘opposes’ to one that ‘chooses’ the best option from an available selection, he added. “We’re getting caught up in debating the individual issue of wind power whereas we should be discussing the wider issue of energy.”

Among a number of other nuggets in his hour-long presidential address, Grimson said engineers should engage more proactively: “We are trusted, but we’re worried we’ll lose trust so we’re guarded.” He also said some of the migrants fleeing Sub-Saharan Africa were doing so due to a lack of basic resources such as water and touched on the recent controversy in this country by stating: “I am embarrassed by the view in Ireland over water – we’re so lucky.”

The president also mentioned how a “Northern Protestant friend” recommended that he read Pope Francis’ encyclical, Laudato Si, which he did and which he found fascinating. “The reason we should reflect on this encyclical is that it addresses the complex question of our stewardship of Earth, our home for the foreseeable future.

“In referring specifically to diversity the encyclical states ‘we must be grateful for the praiseworthy efforts being made by scientists and engineers dedicated to finding solutions to man-made problems. But a sober look at our world shows that the degree of human intervention, often in the service of business interests and consumerism, is actually making our earth less rich and beautiful, ever more limited and grey, even as technological advances and consumer goods continue to abound limitlessly’.”

With regard to lobbying, Grimson again gave the example of energy and said that each energy source “is not without significant undesirable attributes”, and that “very strong and very different lobby groups exist opposing the utilisation of each source” but it is also true to say that “each of us unencumbered with more general or holistic considerations, either would support or have sympathy with each lobby group.

“But we have a dilemma: unless we are prepared to rethink how we wish to live our lives, we will continue to need energy … utilising one or more sources that in isolation we would prefer not to deploy. And as Samuel Florman would put it, ‘professionals have an obligation to lead, but they also have a duty to serve’. To get the right balance between leading and serving is certainly difficult and it requires a climate of sustained dialogue and trust. But, as professionals, are we addressing this challenge?”