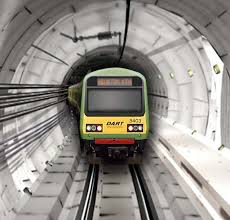 Following consideration at a Government meeting, the Minister for Transport, Tourism and Sport, Paschal Donohoe T.D., announced that the DART Underground project will not proceed as currently designed but will be redesigned to provide a lower cost technical solution for the project.

This decision has been made in the context of preparations for the next Capital Plan from 2016, the details of which are currently being finalised.

The National Transport Authority (NTA), whose statutory remit covers the planning of public transport in the Greater Dublin Area, was requested to review the Dart Underground project in conjunction with the updating of the long term transport strategy for the GDA region. Based on the outcome of the updated business case, the NTA recommended that the project, which remains a key element of integrated transport for the Greater Dublin Area, be redesigned to provide a lower cost technical solution, whilst retaining the required rail connectivity.

The Minister endorses the NTA recommendations and intends to provide funding in the new Capital Plan to progress redesign and planning for the revised project.  The Minister also intends to provide funding for other elements of the overall DART Expansion Programme, including, in particular, electrification of the Northern line to extend the DART to Balbriggan and works to increase frequency of existing services.

Minister Donohoe said: ‘As Government works to further stabilize the public finances, we must continue to seek the best value for taxpayers’ money in everything we do. A project of such magnitude – in the order of €4 billion – has to be designed and delivered in a way that best ensures cost effectiveness for the taxpayer and the State. The overall DART Expansion Programme has a key role to play in delivering an efficient transport system and I intend to progress key elements of the overall Programme but the NTA’s recommendations that the tunnel element can be delivered at a reduced cost to the taxpayer have to be accepted’.

“That is why I informed Government today that I endorsed the NTA’s recommendation and secured its approval for the tunnel element of the project to be redesigned.  I will seek, within the resources available in the next Capital Plan, to provide funds to progress the redesign and planning of the project. In the interest of advancing the development of our rail network so that it better meets the needs of commuters, I also informed Government that I intend to progress elements of the overall DART Expansion Programme which bring value in themselves, subject to appropriate business cases and the availability of funding.”

The Minister also confirmed that the compulsory acquisition powers of the Railway Order for the existing DART Underground project would not now be activated and indicated that the Government has agreed that a new Railway Order be sought for the redesigned project in due course.

The Minister indicated that in respect of other major capital projects which will form part of a new Draft Transport Strategy for the Greater Dublin Area, including the Fingal/North Dublin Transport Study, it is his intention to make further announcements on these shortly in the context of the new Capital Plan.

The National Transport Authority carried out a review of the key transport infrastructure projects that were proposed to support the growth of the Greater Dublin Region. The Authority has now recommended to the Department of Transport, Tourism and Sport that the DART Underground project be re-examined in order to deliver the required rail connectivity in the capital city with a lower cost technical solution.

DART Underground is a rail link proposal, predominately underground, from the Northern Line just north of Connolly Station, to Inchicore on the Kildare Line, and with stations located at Docklands, Pearse, St. Stephen’s Green, Christchurch, Heuston and Inchicore. The project received planning consent in 2011, which became operative in March 2014 following judicial review proceedings taken by a number of third parties.

The Authority has recommended the following:

* The DART Expansion Programme comprises DART Underground, as outlined above, plus:

The overall DART Expansion Programme has been assessed as a positive project from an economic perspective and one which the NTA regards as essential for efficient transport in the region.  However, it has been identified that it is possible to redesign the tunnel part of the project to substantially reduce its capital cost.

It has also been identified that a substantial part of the benefits of the overall DART Expansion Programme are derived from the non-tunnelled elements of the Programme, being the extension of electrified network and the increased train frequencies then applying.