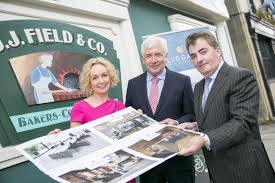 This is an initiative which aims to create an entrepreneurial ecosystem in the region and seeks to create 500 jobs in five years with an initial 75+ jobs in the start up phase. The refurbished Old Bakery building which will be renamed ‘The Ludgate Hub’ was made available for the initiative by local entrepreneur John Field and is due for completion in November 2015.

Ludgate@Skibbereen was officially launched at an event in the recently opened local Arts Centre, Uilinn.  The 10,000 sq ft hub is the first of its kind in a non-urban area in Ireland and offers a range of supports and services for its occupants. Ludgate@Skibbereen was pioneered by a group of entrepreneurs, digital ambassadors and local business owners, which were brought together by West Cork resident and Glen Dimplex CEO, Seán O’Driscoll.

The group operates as a non-profit company and have worked on a pro-bono basis over the last 12 months. With their networks reaching into global companies and organisations, their aim is to provide start-ups with the environment and mentoring support required to research and commercialise opportunities to compete on a global scale.  The initiative will also work to attract the wider Irish diaspora to bring their ideas and talent to Skibbereen.

Vodafone Ireland will be the telecoms partner to the project and SIRO, the ESB and Vodafone fibre broadband joint venture company, will provide the infrastructure to support 1000 Mbps speeds of high quality fibre broadband connectivity.

Commenting, Minister Alex White said “This Government is rebuilding a jobs-focused economy that will support full employment by 2018. Ludgate@Skibbereen is an important initiative, which will be supported by my Department through the Trading Online Voucher Scheme. It will create 500 direct jobs over the next five years while providing a blueprint that will help other rural communities to become part of our fast-growing digital economy. Harnessing digital technology is critical to Ireland’s continued success. The Government’s National Broadband Plan has created the conditions for accelerated commercial investment in high-speed broadband services, which is enabling projects like Ludgate@Skibbereen. The next phase of the plan will see the Government go to procurement later this year to ensure that every home, school and business has access to high-speed broadband, even if they are located in areas where commercial investment isn’t viable.”

Leonard Donnelly, of the Ludgate@Skibbereen Steering Group and former Chairman of Dublin Digital Hub Development Agency added, “The hub will act as a catalyst for local economic development by initially housing up to 75 digital, technology & science innovators. Our formula at its simplest is a fusion of global business experience with first generation entrepreneurs & scientists. Our bottom up plan for the area is a new bandwidth based bridge where we can now link arms to promote Skibbereen with Government Agencies, form partnerships with other Digital Co Ops and most importantly involve all our families working abroad and away from home, to shape their future in the place they all call home in West Cork.

Anne O’Leary, CEO Vodafone Ireland and a member of the steering committee added: “We are delighted to provide dedicated connectivity for Ludgate@Skibbereen which demonstrates our on-going and long-term commitment to investing in and supporting business in Ireland and as well as providing connectivity to rural areas. The commitment and support from Vodafone and SIRO will amplify the efforts to create an innovative entrepreneurial ecosystem, and illustrates once ‘connected’ you can successfully work from one of the most beautiful locations in the world’.

Ludgate@Skibbereen will host Ireland’s first ever National Digital Week in November 2015 to coincide with its official opening. This will showcase high profile international and national speakers and will host a multitude of seminars, workshops and activities.

The announcement today follows on from the inclusion of Ludgate@Skibbereen which based on merit is a unique case study in the South West Action Plan for Jobs, 2015-2017.