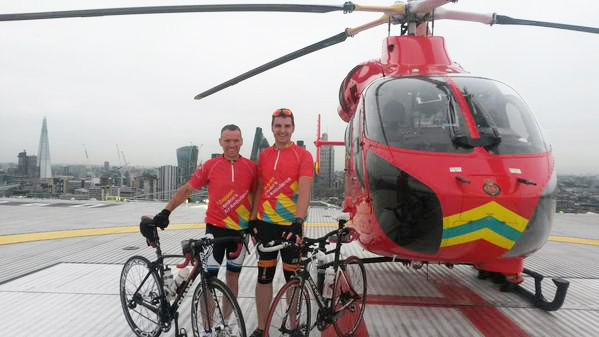 Two London based Irish businessmen are cycling 1700 miles in 12 days across Western Ireland next week to raise money for the London’s Air Ambulance ‘Your London, Your Helicopter’ <http://londonsairambulance.co.uk/2nd-helicopter> campaign for a second emergency medical helicopter. Gerry Boots and friend Brendan Barrett start their ‘Wild Atlantic Way Charity Cycle Challenge’ on 10 August in Kinsale, Co Cork and aim to finish on 21 August in Derry.

London’s Air Ambulance is a charity that delivers an advanced trauma team to London’s most critically ill. After a serious road accident two years ago, Brendan himself had the help of an air ambulance in saving his life. Very recently the pair also had a mutual friend who had the support of an air ambulance too – which is why they have decided to raise money for the London’s Air Ambulance charity. Brendan and Gerry will also be raising money for wellbeing support group charity, Mind Yourself.

The 12 day challenge is believed to be the quickest time ever than anyone has attempted to cycle this route in. Brendan said: “For two complete amateurs this is a serious challenge. To put it in perspective the pros on the Tour De France average 100 miles per day, with rest days, and we will be cycling as much as 175 miles in a single day – not to mention battling west coast winds and other elements!”

Originally from Co Armagh in Northern Ireland, Gerry now lives in Harrow, London. In Harrow alone, the charity treated 32 patients in 2014. Through the acquisition of a second helicopter and by extending its daylight flying hours in the summer months, London’s Air Ambulance will be able to reach more patients in the borough  and in London that need its help.

Mark Davies, Director of Development at London’s Air Ambulance said: “We are very grateful to Brendan and Gerry for their support of the charity and wish them the best of luck on this remarkable challenge. With the continued help of our tireless fundraisers and through the generous donations from the public, we will be able to deliver our life-saving service to more people in London.”

Brendan and Gerry are welcoming anyone who either wants to join them along the route or cheer them on as they pass. You can follow their journey and keep updated on their progress on Twitter <https://twitter.com/eusigns> and Facebook <https://www.facebook.com/WAW1700> , or sponsor their challenge on their Just Giving <https://www.justgiving.com/Thewildatlanticway1700milechallenge/> page.

In its largest ever fundraising drive, London’s Air Ambulance is hoping to raise £6 million, of which £2.1 million is still needed, to acquire and sustain a second helicopter and extend its daylight flying hours for five years.  The charity is urging the 10 million people who live, work and holiday in the capital to donate at yourhelicopter.london <http://www.yourhelicopter.london> or text HELICOPTER to 70800 to donate £5.