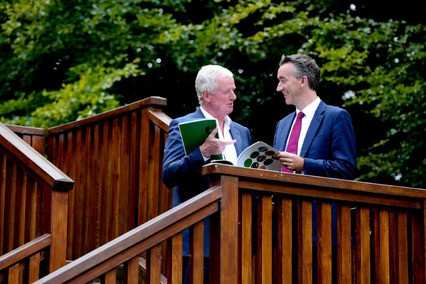 The company delivered an operating profit of €60.5m up 46% on 2013. This represents continued good progress in the recovery of the business from the recent downturn in construction markets.

Commenting on the results the Chief Executive of Coillte, Fergal Leamy said:

“2014 saw important progress by Coillte in continuing to recover from the deep recession in the construction markets in the UK and Ireland.

Coillte’s core business is forestry and we are encouraged by the strong demand we are seeing globally for the products we produce, we expect this demand to increase in the next few years with stronger demand from construction and growing bioenergy needs. In parallel we are maximising the value of each forest hectare we own by developing an exciting renewable energy portfolio which will provide electricity needs for approx 210,000 homes within the next five years.”

Forestry is our core business and 2014 was a successful year with strong timber prices, and a positive response from all stakeholders to the storm damage in February 2014. We also achieved a long standing ambition of dual external certification with the receipt of Programme for the Endorsement of Forest Certification (PEFCTM) Certification in 2014, to add to the existing Forest Stewardship Council®1 (FSC®) Certification for our forest management.

Coillte is an emerging player in renewable energy in Ireland and 2014 laid the groundwork for what will be a very exciting and challenging year in 2015 as it commences construction of its first wind farm projects in Wicklow, Galway and Roscommon.

The intention, in tandem with its co-development partners, is to build out six wind farm projects over the next two to three years. In total Coillte will now have delivered consented projects capable of generating c.325MW, including two further planning approval successes in 2014.

Coillte commenced construction of a €59m investment in its SmartPly manufacturing facility in County Kilkenny in 2014. The renewal of the Smartply facility is a key enabler of the panel products business to move to an innovation led, value added business model. Coillte expects the plant to be fully operational in the first half of 2016.

Coillte has been working closely with Bord na Móna to implement these joint ventures and a key milestone was the agreement of a Memorandum of Understanding by the Boards of both companies, which clearly sets out how both parties plan to progress this body of work. Good progress is being made in 2015 in looking at the areas of mutual benefit identified between the two companies.