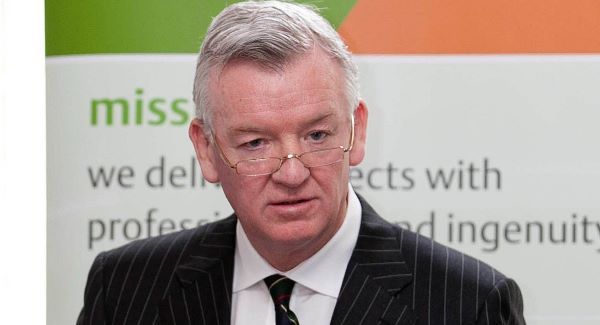 The key to being competitive is to be innovative, says Theo Cullinane, CEO of BAM Ireland, which last year had a turnover of €360m, with €310m of that revenue earned within Ireland.

“BAM is a pioneer of Building Information Modelling (BIM), an innovative process which generates a digital representation of the physical and functional characteristics of a building before any concrete is even poured. This virtual, model-based approach to information management improves efficiency, reduces energy consumption, allows clients to experience their facilities before they are constructed and reduces costs. Every project that we undertake, whether small or large, benefits from this cutting-edge technology.

“Increasing environmental awareness inspires new and innovative engineering and methodologies. We have introduced 100% green electricity for our offices and direct supplied sites, as well as improved energy measurement and recording systems. We’ve also become smarter in how we prepare for work: video or web conferencing is now employed extensively, with few face-to-face meetings. This has had a huge positive impact on our CSR programme and on national and international travel savings.

“While general construction activity remains challenged, there is an increase in private sector investment particularly in the office sector, driven by FDI demand. We are definitely back on the upward curve, but public capital spending needs to rise to a sustainable figure, as a percentage of GNP, in order to bring real stability to the industry. “There has been significant investment in our roads over the past ten years, and we’ve delivered a number of major projects, including the M1 Dundalk Western Bypass, the M7 / M8 Portlaoise Bypass, the M25 Waterford Bypass and M9 Motorway and most recently the flyover at Newland’s Cross. We’re currently constructing a 16 km dual carriageway on the N11, the Arklow – Rathnew scheme. We are also preferred bidder for the M11 Gorey to Enniscorthy motorway and the N25 New Ross Bypass PPP schemes.

“I am disappointed that the Government is shelving plans to progress the Cork-Limerick motorway. This would have cut 30 minutes from the commute time between Ireland’s second and third largest cities and, more importantly, would represent a safer gateway between the two hubs.

“While activity has picked up in the office sector, there has been little office building activity over the past few years. There is a shortage of quality space particularly in Dublin and Cork. International companies are looking for energy efficient, open design, innovative office space and BAM has particular expertise in this area. The JCD office development at No 1 Albert Quay, Cork, which we are constructing, has attracted major national and international interest.”

Cullinane also says that increased construction activity is not restricted to the major cities, but is to be found countrywide. He says: “Currently, BAM is active in 29 of the 32 counties. We have directly invested in major PPP initiatives such as the Schools’ Bundle 3 and 4, which meant we’ve had teams operating on those projects in Donegal, Galway, Leitrim, Limerick, Waterford, Westmeath, Wexford, Clare, Tipperary, Cork and Louth. We are also involved in many other locations across Ireland including the Clinical Research Facility and Translational Research Facility at NUI Galway; Research Hub at Grangegorman; redevelopment at Ulster Hospital; Glanbia ‘Project Purple’ in Kilkenny; National Children’s Detention Centre, North Dublin; Corrib gas pipeline works for the undersea pipeline under Sruwaddacon bay, Mayo; and the Science Building refurbishment and extension at Sligo IT.

“Investment in social and productive infrastructure is key to positioning the country for further development and growth. We need to action the policies and plans that we have developed over the past 20 years to ensure that we continue to compete globally. Given the ongoing fiscal constraints on government finances, the PPP model is clearly the most effective model to finance these large projects.”

Everyone has their part to play in Ireland’s recovery and BAM is doing its bit to assist smaller companies, says Cullinane. “We have a number of initiatives which encourage local supply chains to work with us on our projects around the country. We have successfully run ‘Meet the Buyer’ events prior to the commencement of many projects, sometimes in partnership with agencies such as Enterprise Ireland and the NDFA. While all those who work with us must conform to BAM’s standards of safety, quality and competitiveness, it has been proven that a huge percentage of the supply chain is local to projects. Indirectly, local regions always benefit through induced employment and revenue in sectors such as transport, retail and catering.”

As to its own financial well-being, diversification has helped see BAM Ireland through recent difficult times, says Cullinane. “Being part of a global organisation has had a positive impact, helping us to pitch for, and win, international business. Over the past few years we have worked in partnership with BAM sister companies on a number of international projects including: the New Port of Aqaba in Jordan; a new stadium and hotel development at Al Ain (UAE); the Coleraine to Derry Track Renewal and the Borders Rail project in Scotland. Not only do these projects build revenue for BAM Ireland, but they also allow us to deploy our staff on exciting, state-of-the-art construction projects, where they can further develop their skillset and expertise.”

Cullinane says one of the problems faced by the industry is that the ‘new’ forms of public works contracts still need further reform. “These have proven difficult to operate as they militate against a partnership approach, which is essential for the successful delivery of complex construction projects. The industry was promised ‘fixed and complete designs for a fixed price’, but this seldom happened and a large number of projects are now locked in conciliation and arbitration at huge cost and a waste of valuable management time.

“While changes being proposed will certainly improve their operation, there are a number of additional areas which I feel need to be considered.

“Risk should be allocated to the party best placed to manage it and continuing to make the contractor responsible for unforeseen underground conditions is not appropriate. As the sites are in the ownership of public authorities, by means of their own preliminary design processes, they should investigate the ground conditions so that the works can be properly designed and fairly priced.

“If quality is to be an award criteria, which is to be welcomed, it must be on highly objective and clearly stated grounds to maintain market confidence in the process.

“An unacceptable amendment to the new contracts is that contractors, who are forced to go to arbitration to recover legitimate entitlements, face the onus of having to pay their own costs even if successful. In most jurisdictions costs follow the award. This amendment imposes an unfair burden on contractors and encourages public authorities to reject conciliators’ recommendations in the expectation that contractors won’t risk arbitration.

“I think that consultation and the willingness for change is necessary before we start to see genuine reform in public procurement. The use of internationally accepted forms of contract would alleviate this issue but that seems some way off.”

So far BAM has not been hit by a skill shortage or a difficulty in recruiting qualified engineers. “We have managed to retain a high proportion of our core staff during the downturn, some of whom were redeployed on our international sites, where they’ve been gaining valuable experience on some fantastic projects,” says Cullinane. “We have a rich talent pool of specialist expertise which we can draw upon as we continue to increase our foothold domestically and internationally.

“It’s the responsibility of construction companies to ensure that staff benefit from the latest training and upskilling, whether it’s in health and safety, BIM or building processes. We were awarded the CPD Accredited Employer standard by Engineers Ireland, which provides an excellent structure to ensure that the personal and professional development of staff is continually addressed and is at the top of our strategic agenda.

“We believe that our employees represent our most valuable resource and consequently workplace safety is paramount. We have made significant progress in the implementation of the behavioural safety programme, ‘Beyond Zero’, which is our vision of a sustainable future built on excellence in all that we do. It is about employees choosing to work safely rather than being made to work safely, and for BAM, it’s about giving them the necessary training and supports to make this a reality.

“While there has always been healthy and strong competition among construction companies, and clearly pricing reflects that, we have quite a good networking philosophy within the sector. Organisations such as the Construction Industry Federation and Engineers Ireland, as well as playing an integral role in the future direction of the industry and making representations to government, help to foster a sense of community, training and knowledge sharing.

BAM plays a very active role in terms of various policy groups within the sector and we’ve been an advocate of sharing expertise in processes such as BIM.”