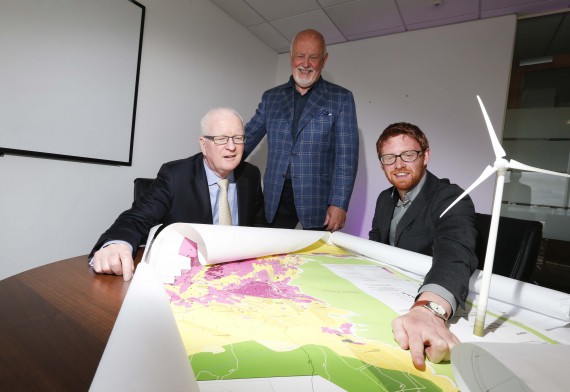 A Memorandum of Understanding to co-develop a large offshore wind farm in the northern area of the Irish Sea has been signed by Oriel Windfarm Ltd. and Gaelectric Holdings plc.

The area of sea known as the ‘North Irish Sea Array’ (NISA) potentially could produce anywhere up to 870 MW of energy from the Irish Sea winds and will commence with the development of a 15 MW demonstration project entailing an investment of €80million in a new research and development hub for offshore wind energy.

The 15 MW NISA Demonstration Project, with an initial investment of €80million, will be a key first step towards the realisation of the much larger NISA development. It will provide the necessary catalyst for further projects as proposed in ISLES II[1] and, in so doing, strengthen Ireland’s indigenous renewable sector providing sustainable jobs and help meet critical climate change targets. The NISA Offshore Demonstration Project will see international companies use the Irish Sea as a testing ground for new innovations in offshore wind energy technology.  Demonstration projects play a vital role in the development of new technology, with the opportunity to test turbines, cables and foundations under full operating conditions.

Off-shore wind has shown proven economic viability around the world. Off-shore wind farms are present off the shores of numerous countries including Denmark, the United Kingdom and most recently off the east coast of Ireland. The Arklow bank project (Phase 1) is a 25 MW partnership venture between Airtricity and GE Energy.

Off-shore wind has some considerably different characteristics when compared with conventional on-shore development. On the positive side, wind speeds at sea tend to be considerably higher than those over land providing greater returns. In terms of transportation, off-shore wind farming has a considerable advantage over on-shore development in terms physically getting turbines to the site. Off-shore turbines are also predominantly towards the largest end of the scale in terms of tower height and rotor diameter.

Brian Britton, Managing Director of Oriel Windfarm Ltd, said: “This project represents the biggest step forward for the Irish offshore wind energy sector in the last ten years. NISA will commence with a significant demonstration project which, by their nature, draw investment and attract collaborations with local universities and provide opportunities for local businesses. Demonstration projects in the UK, Germany and Denmark have led to the development of full scale projects, leading to the creation of many thousands of jobs in those countries.”

Brendan McGrath, CEO of Gaelectric Holdings plc, commented: “Offshore wind speeds, relatively shallow water depth and favourable sea bed conditions, make the Irish Sea an ideal location for offshore wind projects and as a testing ground for offshore wind technologies.  The presence of a number of established ports on the east coast of Ireland is also a factor which will help attract investment to Ireland.  We are confident that the project will attract leading industry players to the offshore Irish market and will be an important step towards realising the vast potential for renewable generation from the Irish Sea.”