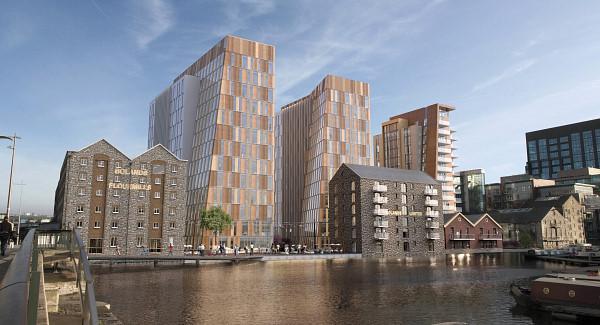 It’s a green light from Dublin City Council with planning permission granted for a €150m development of the Boland’s Mills site in Grand Canal Dock.

Nama is to finance the €150m mixed use development on the site, which is near by the area held by rebels led by Eamon de Valera during the Easter Rising in 1916.

Mark Reynolds of Savills has confirmed that Boland’s Mill has received a grant of planning permission from Dublin City Council (DCC) to develop 3 new landmark buildings comprising approximately 36,851 sq. m (approx. 397,000 sq ft) of office, residential, retail and cultural space over a two-level basement.  The project will also involve the restoration of a number of protected Mill buildings and the development of a new civic plaza on to the waterfront to Grand Canal Dock.

Savills has also announced that the new development will be branded ‘Boland’s Quay’.

The planning application – which was submitted to DCC in December 2014 – is the latest to be approved since the Dublin docklands were designated a strategic development zone (SDZ).

The new development, which is located in one of the SDZ blocks identified by the Council as having an employment focus, is likely to accommodate a significant new employment population along with a new residential community. In addition, the site will provide new public spaces opening onto the canal waterway, for workers, residents and visitors alike, as well as new retail, restaurant and cultural uses.   Demolition and enabling works are to commence immediately (July 2015) with Hegarty Demolition appointed to carry out the works.  The NAMA Board may now consider proposals from the receiver for funding or otherwise facilitating the development of this important site.

Mark Reynolds, a Director at Savills, who is acting as the receiver, commented: “Dublin City Council’s decision to grant planning permission for the development of Boland’s Mill – one of the city’s most iconic sites – is great news for the Docklands and Dublin as a whole. The purpose of designating the area an SDZ was to facilitate fast track planning applications for much-needed commercial and residential development – this shows it has worked. The planning approval will now facilitate the examination of options regarding the provision of badly needed commercial and residential accommodation to meet pent up demand from local occupiers and foreign direct investment.”

The overall development costs for the Boland’s Mill project, a scheme designed by Dublin’s leading architectural practice Burke Kennedy Doyle, is expected to be in excess of €150m and construction is expected to take over 2 years to full completion. The new buildings will be built to a high construction and environment specification.

“NAMA welcomes Dublin City Council’s planning approval for this key Dublin landmark site. The Agency recognises the positive and proactive approach of the City Council, both in approving the SDZ Scheme in 2014 and in progressing complex planning permissions such as this one, since then.   NAMA is committed to increasing the value of secured assets in our portfolio and maximising the amount we can recover for taxpayers. Our funding of this successful application for planning permission by the receiver demonstrates this commitment. It also shows what NAMA can do to facilitate high-quality developments in the South Docklands area and to accelerate the delivery of much needed office and residential accommodation in Dublin’s central business district”.