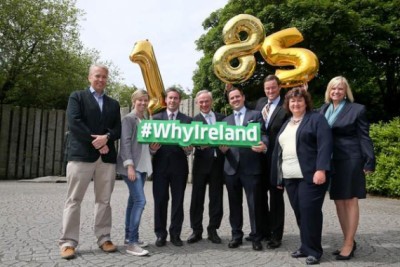 Minister for Jobs, Enterprise and Innovation Richard Bruton TD has just announced the creation of 185 new jobs for Dublin and Wexford from 5 North American companies and 1 European-based high growth company.

The investments are supported by the Department of Jobs, Enterprise and Innovation through IDA Ireland.

The new jobs will be spread across a number of sectors with a range of activities such as Technology, FinTech,  Business Analytics and Medical Devices.


The companies creating the new jobs are:

(50) NuoDB June 15, 2015 – NuoDB, the leader in scale-out SQL database technology for global operations, today announced the opening of its Europe, Middle East and Africa (EMEA) development centre in Dublin, Ireland and a new office in Belfast, Northern Ireland – designed to tap into the region’s pool of dynamic and highly skilled talent.   Over the next three years, NuoDB plans to recruit several dozen developers, engineers and tech support professionals in Europe, including 50 in Dublin.

(20) Megatransfert SAS is small, fast growing French FinTech company specialising in the area of micropayments via prepaid cards, TCom-payment, E-money, E-Wallet and M-Wallet solutions.  Established in 2011 and headquartered in Nice, France, Megatransfert has developed a secure system (YouPass) for allowing customers convert unused phone credit to cash or to online accounts such as Amazon and PayPal.

(30) DataClarity specializes in software applications that enhances and transforms corporate data into actionable information through proven performance management software, consulting and educational services. The company plans to create 30 jobs over 2 years in Dublin in an ICT capacity.

(25) CRI, a global full service medical device manufacturer announced today the creation of 25 new jobs over the next three years at its Wexford facility in Ireland.  CRI® Wexford, Ireland specializes in custom interventional balloon design and manufacturing. Over the next three years, the Wexford facility will expand to support operations at CRI’s four other locations in Indianapolis, Costa Rica and two locations in Minnesota.

(30) Modern Marketing Concepts Inc, a Binghamton, NY based global sales optimization company, providing outsourced Multichannel Sales and Marketing to Healthcare and Building Products today announced the establishment of its EMEA headquarters in Dublin, creating 30 jobs over the next three years.  Recruitment is underway to build a sales and marketing team at its offices in Sandyford, Dublin.

As part of IDA’s new strategy, IDA has committed to bring new name investors into Ireland.  Every day, IDA executives across the world are looking towards embracing not just large multinational corporations (MNCs), but also working with high-growth companies, who aspire to be the Google, Oracle and Facebook of the future.

Making the announcement Minister Richard Bruton T.D. said: “Targeting high-growth emerging companies is a key part of the Government’s Action Plan for Jobs. The thinking behind this drive is that these companies will establish deep roots here from early in their growth and make a substantial impact on our economy. There is also of course the possibility that one of these companies will turn into a world-leading company of the future. Today’s announcement that 6 such fast-growing young companies are creating 185 jobs in Dublin and Wexford helps confirm that this strategy is working, but above all is a great boost for jobs in Ireland.”

Commenting on the announcement, Martin Shanahan, CEO IDA Ireland said: “IDA Ireland’s strategy of attracting high-growth companies has resulted in the creation of high-value jobs in IT, internet and digital media which has greatly added to Ireland’s reputation as a global tech centre.  Many companies that started out with modest plans are now some of the top employers in Ireland making a significant contribution to the economy.  IDA Ireland looks forward to continuing to partner closely with this new group of companies as they scale their global footprint from Ireland. “

Minister for Public Expenditure and Reform, Brendan Howlin T.D., welcomed the new job opportunities and said: “The global medical device manufacturer, CRI, will create 25 jobs over the next three years at its Wexford facility. I wish to echo the comments of Minister Bruton and Mr Shanahan that the Action Plan for Jobs is truly delivering. We will continue to ensure that the economic recovery reaches all parts of the country. Wexford’s employment levels are improving and this is further proof that this policy is working.”