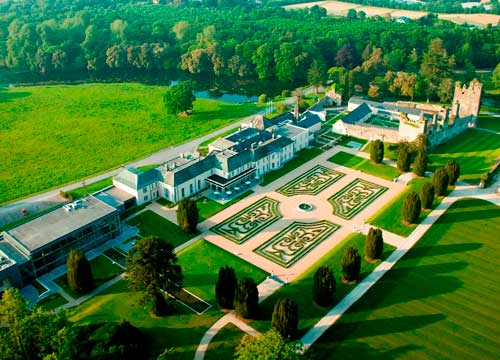 The five-star Castlemartyr Resort in County Cork, Ireland, has been brought to the market by international real estate advisors, Savills, with a guide price of €13m.

Situated in the picturesque village of Castlemartyr, the hotel is one of Ireland’s finest and is well-known for attracting high-profile guests from around the world, including Bruce Springsteen and Bill Clinton.

The hotel, on a majestic 210 acres of land, incorporates a historic 18th century manor house and lies adjacent to a 13th century castle originally built by the Knights Templar under Richard Earl de Clare, better known as Strongbow. The hotel opened in 2007 with 103 spacious bedrooms, including 32 suites and manor state rooms, a luxurious spa and health club including a 20 metre swimming pool, 10 treatment rooms, steam room, sauna, water features and a private treatment suite with infinity pool and sauna. The resort also features an 18 hole inland links golf course designed by Ron Kirby.

Culinary offerings at Castlemartyr include The Bell Tower Restaurant, Franchini’s Italian Restaurant, Knights Bar and the Garden Room.  The resort is also a leading wedding destination – the Capel Suite can accommodate up to 220 wedding guests and the Kiltha Rooms located in the historic manor house are ideal for more intimate events and celebrations.

The sale of Castlemartyr Resort includes 19 Golf Lodges and 1 Mews House. The property is being sold as a going concern and there will be no interruption to business or events booked.

Available in a separate Lot to Castlemartyr Resort, are 9 Gate Lodges located at the resort entrance. Known as Linn Corr, this Lot is guiding €1m and provides an opportunity to acquire 9 impressive terraced houses, each with three bedrooms.

Castlemartyr Resort is only a 20 minute drive from Cork City and Cork International Airport. It also benefits from ease of access to Dublin, Shannon Airport and Waterford.

According to Tom Barrett of Savills: “Castlemartyr Resort is one of the finest hotels to ever come to the market in Ireland and provides a buyer with the opportunity to acquire an exceptional hotel in a superb condition. The significant increase in domestic and overseas trips taken in Ireland has boosted Ireland’s hotel trade and Castlemartyr has huge potential. We expect strong demand from both local and international buyers.”