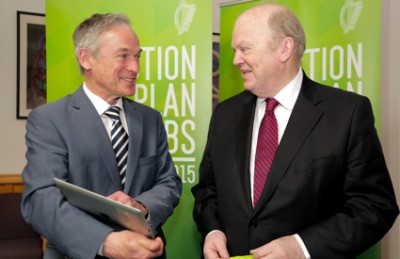 The Minister for Jobs, Enterprise and Innovation, Richard Bruton TD, and the Minister for Finance, Michael Noonan TD, have just unveiled SURE – a generous tax refund aimed at encouraging more people to start up businesses.

The ‘StartUp Refunds for Entrepreneurs’ allows entrepreneurs obtain a refund from the Government of up to 41% of the capital they invest in starting up a business.
Ministers Bruton and Noonan also today unveiled a comprehensive marketing campaign aimed at increasing awareness of SURE among people considering starting their own businesses, as part of an overall drive aimed at supporting more startups and ultimately more job-creation. This campaign includes:
· A new website – sure.gov.ie
· An online calculator, aimed at making it easy for people considering starting their own businesses to calculate how much they can receive under the scheme. This calculator will be made available on a range of Govt and business-related websites , and will also have a “printout” function, allowing entrepreneurs to show it to banks and other potential investors
· An advertisement campaign using in particular local radio
· A simple, user-friendly one-page leaflet summarising the scheme, which will be made available in hundreds of locations around the country where entrepreneurs will be able to find it
· A new Revenue guide which explains the details of the scheme in a user friendly way

Launching the scheme today, Minister Bruton said:
“Two thirds of all new jobs across the economy are created by start-ups in their first five years of existence, and that is why we are putting in place a range of new measures specifically aimed at encouraging more people to start their own businesses. In Ireland we have great start-ups, we just don’t have enough of them. Through SURE, the Government is directly offering cash to people who are considering starting their own business, up to a value of 41% of their total investment. We are determined to ensure that as many people as possible are aware of this generous scheme so that more people start businesses and help create the jobs we need”.

Also launching the scheme today, Minister Noonan said:
“SURE is an excellent example of a Government initiative to provide a source of much needed funds to new businesses who often find it difficult to source seed capital. Officials have been working closely to simplify the scheme in order to make it easier to understand and communicate to interested entrepreneurs. Entrepreneurs who start their own business could receive a refund of tax previously paid of up to 41% of the capital invested in their new company. The scheme will also be marketed by the Local Enterprise Offices, who will be only too happy to assist any entrepreneurs with any queries they may have”. – See more at: http://www.merrionstreet.ie/en/News-Room/Releases/Government_cash_for_startups_through_SURE_tax_refund_%E2%80%93_Minister_Bruton_Minister_Noonan_.html#sthash.MXWlpDjQ.dpuf