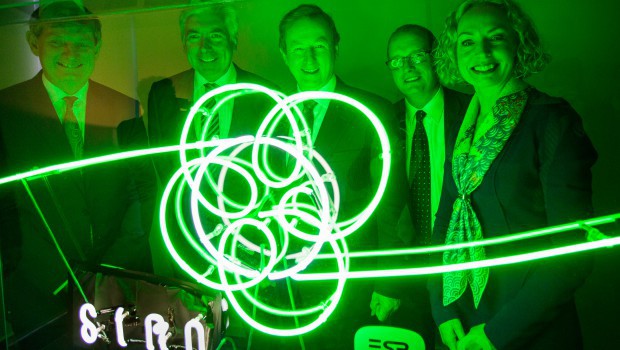 An Taoiseach Enda Kenny and Minister for Communications, Energy and Natural Resources Alex White have unveiled SIRO as the new brand of ESB and Vodafone Ireland’s fibre broadband joint venture company. The company said it would employ 60 people, and a further 200 construction jobs will be supported across Ireland as part of the roll-out of the network.

SIRO, derived from Sirius the brightest star in the night sky, claimed it would be “the most powerful network in the country, unlike any other broadband infrastructure in Ireland”.

SIRO is investing €450 million in building Ireland’s first 100 per cent fibre-to-the-building broadband network, offering speeds from 200Mbps to 1,000Mbps to 500,000 premises in 50 regional towns. SIRO is not a retail product and is unique in that it exclusively offers a wholesale open access network, meaning that it will be available to all telecoms operators in Ireland to resell to their customers.

The first 10 locations, dubbed Ireland’s first Gigabit towns or ‘fibrehoods’, to be included in the roll-out are: Cavan, Dundalk, Westport, Castlebar, Sligo, Carrigaline, Tralee, Navan, Letterkenny and Wexford. Construction on the network began last September delivering 1 Gigabit speeds to 300 homes in Cavan, and continues this summer. The initial phase of the project is expected to be fully rolled out by the end of 2018 with scope for a second phase that will reach 300 smaller towns.

At the event SIRO also announced its interest in tendering for the National Broadband Plan later this year to deliver the optimum solution for bringing high speed broadband to rural Ireland. Backed by two of Ireland’s leading companies – Vodafone and ESB – SIRO already has access to €450 million in funding to roll out the first phase of the project, with additional funding available for future investment and further phases.

SIRO’s broadband network will be deployed on ESB’s existing overhead and underground infrastructure, ensuring a fast and cost-efficient roll-out to every county in Ireland and reversing the digital divide between the capital and regional towns, the firm said. The company’s key differentiator is that it is a custom-built 100 per cent fibre optic service powered by light, with no copper connection at any point in the network.

“This Government is serious about broadband,” the Taoiseach said. High-speed broadband is a necessity for all Irish homes and businesses as we connect Ireland to the world and create new jobs. This is why the Government supported the joint venture between ESB and Vodafone to create SIRO. Today’s launch of SIRO will light up Ireland.

“As a result of this project, 50 regional towns in 26 counties – the equivalent of half a million homes and businesses around Ireland – will have access to a 1 Gigabit 100 per cent fibre broadband connection, putting us on a par for high speed connectivity with leading international hubs, such as Tokyo and Hong Kong. As a result, Ireland’s first Gigabit towns – Cavan, Dundalk, Westport, Castlebar, Sligo, Carrigaline, Tralee, Navan, Letterkenny and Wexford – will ultimately have the same economic opportunities as those that are available in Dublin.”

Minister for Communications, Alex White TD, said: “The formation of SIRO has added a hugely competitive dynamic to the Irish market, and it comes at a critical time in the development of our broadband infrastructure. These developments are being achieved by a partnership between the Government and commercial telecommunications companies.

“The commercial sector has responded by investing heavily to provide high-speed access to 70 per cent of Ireland’s premises. The Government will ensure that high-speed broadband is delivered to the remaining 30 per cent through a State-funded intervention.”

Anne O’Leary, Vodafone Ireland CEO, said: “SIRO is a transformative project which will finally provide the connectivity required to put Ireland on an equal footing with some of the most competitive economies across the globe.

“This project is being held up internationally as an example of unique innovation where telecoms operators can re-use existing national electricity infrastructure to provide broadband right into customers’ homes and businesses. It is Ireland’s first fully open access network, which is a huge positive as it will drive welcome competition in the market and much needed investment in broadband infrastructure across regional Ireland.”

Pat O’Doherty, chief executive of ESB, said: “Together with Vodafone, ESB is investing almost half a billion euro in SIRO to deliver the most powerful broadband service ever available in Ireland by running fibre technology alongside some of our overhead and underground electricity lines.

“This is the first project of its kind in Europe and will ensure a fast and cost-efficient roll-out to every county in Ireland, reversing the digital divide between the capital and regional towns – a potential legacy that we can all be proud of.”

Sean Atkinson, SIRO CEO, said: “We are very fortunate to have two parents in the form of ESB and Vodafone, both leading international companies with the technological and infrastructural expertise to make SIRO a reality.

“SIRO will deliver a bright future for Ireland, supporting economic prosperity by delivering services that are cutting edge and transformative and boosting retail competition in the broadband market for all Irish consumers and businesses. Our 100 per cent fibre optic broadband service will help Ireland’s regional areas compete more effectively for investment and jobs, SMEs to work more efficiently and give consumers unrivalled digital access.

“I believe that SIRO as a custom-built open access FTTB wholesale operator is ideally suited to helping the Government achieve its National Broadband Plan goal of delivering a minimum of 30Mbps to every premises in the country.”