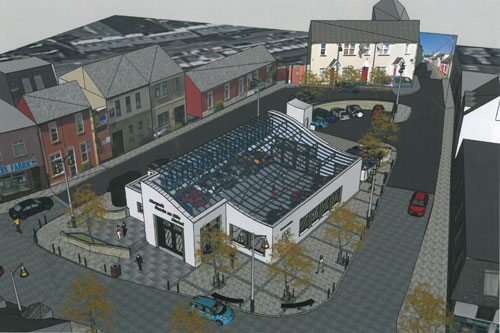 Clare County Council has announced that Phase 1 of the Ennis Market Rejuvenation project will now proceed to tender stage with construction expected to commence in the autumn of 2015.

The €1.75 loan for the Market Rejuvenation Project in Ennis, which also includes the upgrading of the streets adjoining the market area, is now in place.

Clare County Council says a detailed design will shortly proceed to tender stage in relation to Phase One of the redevelopment of the market which will begin at Garraunakilla, the site of the current Farmer’s Market.

Speaking on behalf of the Elected Members of Ennis Municipal District Committee, Mayor of Ennis Cllr Johnny Flynn welcomed the progress being made in relation to the project in consultation with local residents and business people.

He continued: “This project will have a significant role in the rejuvenation of this area of the town, which is significant, both from an economic and heritage perspective considering Ennis has always been an important market town historically.  The development will be particularly beneficial to local food and craft producers such as the Ennis Farmers Market who will be provided with a quality and convenient location to promote their locally sourced and produced goods.”

“The progression of the detailed design of Phase One of the proposed Market Rejuvenation Project has involved consultation with users and with residents and businesses in the immediate vicinity. We believe that enhancements to the design have been favourably received by proposed users of the facility and residents of the area,” said Mr.Gerard Dollard, Director of Services.

“The Council’s primary objective is to create a successful, viable and sustainable commercial and community operation for the proposed covered market.  It should be noted that the market will have a dual function and provide a car parking facility when not in use.

“In line with all major projects, the plan to minimise disruption to users and neighbours during construction can be fully developed when a selected contractor has emerged from the overall tender process. It is at that point that sequencing of activity and overall arrangements can be further considered and discussed,” concluded Mr. Dollard.