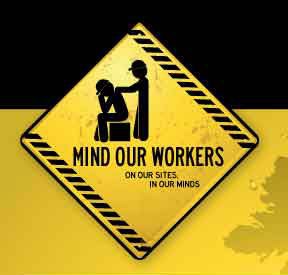 The Construction Industry Federation (CIF) and Pieta House have just launched a new campaign aimed at creating awareness of suicide and mental health throughout the construction industry.

It is estimated that 1,039 men from a construction or production background died by suicide between 2008 and 2012.

The campaign aims to encourage more communication about suicide and mental health on construction sites and amongst construction workers around the country.

A report which examines the level of suicide in the construction sector has been published as part of the campaign. Among the other key statistics highlighted in the report are:

Speaking about the campaign, Pieta House CEO Brian Higgins said, “We are delighted to initiate and launch the Mind Our Workers campaign in partnership with the CIF. It is extremely encouraging that a national body as influential as the CIF sees the impact of suicide on the construction industry and its employees and is partnering with an organisation such as ourselves to help tackle the issue. Partnerships such as this are a way of building resilience within our society”.

Tom Parlon, CIF Director General backed Mr Higgins’ comments saying, “As the statistics highlight, the level of suicide in the construction sector is shocking. The industry can’t ignore this problem – there is a necessity to take steps to try to help those in need. Given the amount of time people spend in the workplace, that is where the Mind Our Workers campaign will focus. By promoting a more open approach amongst construction workers and their colleagues we hope it might reduce the number of people who feel they have no way out.”

CIF President Michael Stone also endorsed the Mind Our Workers campaign saying, “We want to help drive awareness of suicide and mental health throughout the construction industry. A greater level of understanding and more open culture about these extremely important issues needs to exist.  We want to see a working environment whereby is it acceptable for men to ask their friends and colleagues, “Are you ok?”  Men in any walk of life should be able to talk about their problems.  We need to take these matters out of the shadows and bring them into the light.  If even one life is saved thanks to the awareness and understanding promoted by this campaign then everyone in the CIF and Pieta House will consider the campaign to have been a great success.”

The Mind Our Workers campaign will run throughout the year. The tagline for the campaign is ‘On our sites, in our minds’.

The report will be distributed to all CIF members as well as to members of the Oireachtas and other relevant groups. www.cif.ie