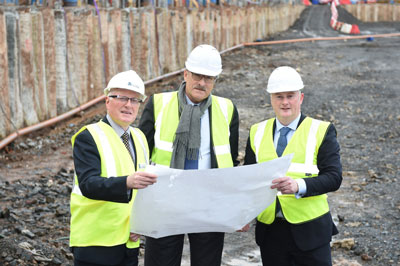 Construction on the overall £250 million, 75,000 square metre Belfast campus began in 2014 and is expected to complete in 2018. It is currently the largest building project in Northern Ireland and phase two will see two new blocks developed on York Street, directly opposite the existing campus building.

Ulster University Acting Vice-Chancellor, Professor Alastair Adair said: “At a crucial time for Ulster University and for the Higher Education sector, today’s announcement brings us a step closer to realising our plans to deliver a modern, first class teaching and learning environment which the people of Northern Ireland deserve and can be truly proud of.

“By 2018, over 15,000 students and staff will bring the new campus to life, bringing much needed regeneration to this area of the city. Not only will the positive impact on higher education be felt for generations to come, but the impact on the economy, particularly in terms of the construction sector will be invaluable with over 5000 construction jobs supported during the project build and fit out period.”

Rui Vieira de Sá, President, Somague said: “This is our first partnership with a Northern Ireland construction company and we believe that this joint venture can deliver significant benefits to both Ulster University and the wider construction sector. We look forward to commencing what is an exciting large scale project for the people of Northern Ireland.”

Last year, the University announced that it had secured a £150 million loan facility for the build.