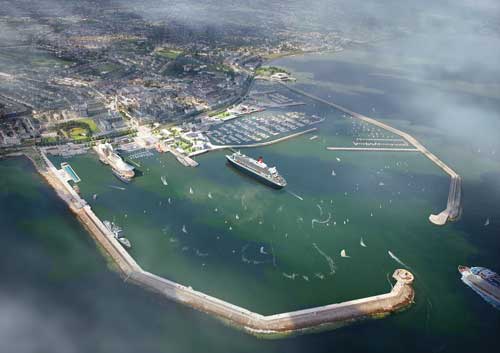 The Dún Laoghaire BID (Business Improvement District) company is hailing plans for a next-generation cruise berth as a game-changer for the area’s economy.

The Dún Laoghaire Cruise Stakeholder Group (composed of the BID company, Dún Laoghaire Harbour Company and Dún Laoghaire Rathdown Co. Council) says the new cruise berth will provide a €27 million boost to the area and hinterlands and will lead to significant jobs growth. The Stakeholder Group has the long-term aim of emulating the Copenhagen model of welcoming 800,000 cruise visitors to Dublin per annum, with at least 50% of these coming to Dún Laoghaire.

This will create new employment both at construction phase and develop employment and growth in the tourism industry in Dún Laoghaire and surrounding areas. The expansion and development of the cruise business would offer significant economic benefits to Dún Laoghaire and the surrounding areas. These would include expenditure by disembarked passenger and crew; payments to excursion operators by cruise companies; harbour fees; and purchases by cruise ships of local supplies while in harbour. The increased cruise passenger numbers will also contribute to significant additional domestic footfall in the town and harbour areas.  It is expected that for every cruise passenger, at least one Irish resident will be attracted to the Harbour to look at the ships.

This potential 400,000 increase in footfall will also add vibrancy to the area and represents economic opportunities for local businesses. The BID company, which represents Dún Laoghaire’s 800 plus businesses, says the new 390-metre berth will position Dún Laoghaire as leaders in marine and leisure tourism in Ireland and will transform the fortunes of business with the creation of new jobs in the area. The proposed new berth at Dún Laoghaire Harbour will be one of just two in Ireland that can accommodate cruise ships up to 340m in length. At present Cobh is the only port in Ireland that can accommodate these vessels. The Dún Laoghaire Cruise Stakeholder Group developed the plans for the establishment of the new cruise berth facility.  The Stakeholder Group welcomed the first cruise call to the Harbour in 2012 with 300 passengers and crew arriving that year.  This snowballed and in 2013 30,000 cruise passengers arrived in Dún Laoghaire.

This figure will treble this year with the arrival of 100,000 cruise passengers and crew to the Harbour. Over 50% of new ships currently on order are over 300m in length. Cruise ships want to be able to dock and allow passengers to disembark directly on to a quay, rather than being taken ashore by tender. Chairman of the Dún Laoghaire BID company, Don McManus says the new cruise berth will be a game changer for the economy in Dún Laoghaire and surrounding areas: “Dún Laoghaire is designated as a marine tourism port under the Government’s National Ports Policy, and the development of the new cruise berth will be fundamental to establishing the entire area as a leading marine and leisure destination.”

“The expansion and development of the cruise business will offer significant economic benefits to Dún Laoghaire and the surrounding areas. These include expenditure by disembarked passenger and crew; payments to excursion operators by cruise companies; harbour fees; and purchases by cruise ships of local supplies while in harbour.

The planning application for the new facility is set to be submitted to An Bord Pleanala by the end of April.