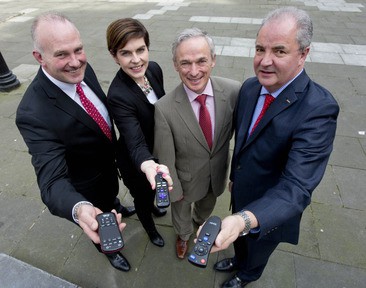 SMK designs and produces a wide range of products for the electronics sector including connectors and switches, remote control units and touch screens. Demand for SMK products is driven by the requirements of a new generation of communications devices such as smart phones and tablets, as well as a proliferation of Pay TV Services and ever-increasing Electronic content in vehicles. The company works closely with clients in new product development and boasts many household name clients in these sectors.

SMK Electronics (Europe) Limited in Ireland will co-ordinate the activities of the company’s sales and design operations in Europe and will employ seven people initially. The new European HQ will be located at Northwood Business Park and will be overseen by Mr. Paul Evans, Corporate Executive VP. Originally from Dublin, Mr. Evans is a 30-year veteran of SMK and in 2006 was appointed SMK’s first non-Japanese Vice President.

SMK was introduced to Ireland through ConnectIreland, the company responsible for delivering the Government’s Succeed in Ireland initiative, as part of the Action Plan for Jobs, in association with IDA Ireland.

Welcoming the announcement, Minister for Jobs, Enterprise and Innovation, Richard Bruton TD said: “I am delighted that SMK has chosen Ireland as the location for its new European Headquarters. The availability of talent was a key consideration for the company and once again highlights the attractiveness of Ireland’s well educated workforce to foreign direct investment. The announcement is another ConnectIreland project supported by my Department through IDA Ireland and is another example of how companies leading in their field are establishing in Ireland. I wish SMK every success for the future”.

Paul Evans, Corporate Executive VP, SMK Corporation said: “We considered a number of locations for our new European Headquarters including Germany, England and the Netherlands. We chose Ireland because of the availability of highly skilled professionals and the business friendly environment. ConnectIreland’s support enabled us to establish our new European HQ in Dublin far more quickly than we could have in any other location we considered.

Michael McLoughlin, ConnectIreland CEO, said: “We are delighted that as SMK Corporation celebrate 90 years in business this year that they have chosen Ireland as a strategic centre for their next phase of growth in Europe. The creation of seven financial and general management positions in the coming 12 months is very welcome and brings to over 1,100 the number of jobs created in Ireland through the Government’s Succeed in Ireland initiative. We are delighted to have worked with SMK and wish them every success in Ireland as they continue to expand their workforce to 11 over the coming three years.”
ENDS