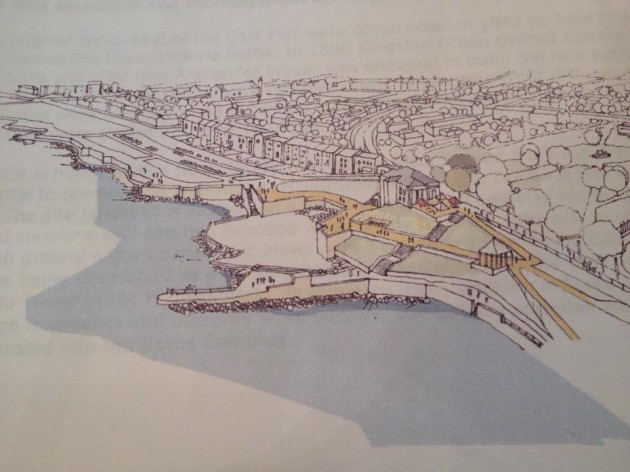 Dún Laoghaire Rathdown County Council is planning to redevelop the public baths site adjacent to Dún Laoghaire’s East Pier. Details were announced in a presentation by officials to the elected members from the Dún Laoghaire side of the council recently.

In 1910 the original 1843 baths were completely rebuilt by Kingstown Town Council. During the 1970s heated indoor pools were added as well as a water fun park (Rainbow Rapids). In 1997 the outdoor baths were closed when a proposal was made to develop a huge water complex on the site. This proposal did not come to fruition, due in part to the huge public outcry, but the baths remained closed.

The latest proposal from council officials would retain the existing structure but include a new pedestrian connection between the promenade at Newtownsmith and the back of the East Pier. Proposed new amenities include a small café, art gallery, improved maritime gardens and a new jetty for access to the sea for kayaks, canoes and small craft.

Welcoming the proposal to put the plans out to public consultation, Councillor Cormac Devlin (Fianna Fáil), Chairperson of the Dún Laoghaire Area Committee of the Council said “the new proposals are in keeping with the low rise built environment surrounding the site. The plans will also ensure the site remains in public ownership, provide additional amenities on the seafront while also linking the promenade at Newtownsmith to the East Pier.